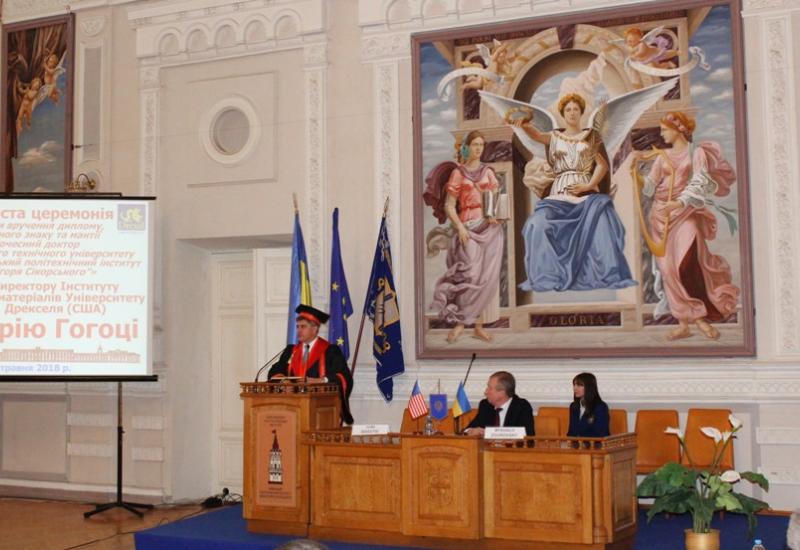 On May, 14 a solemn ceremony of awarding the diploma of "Honored Doctor of the National Technical University of Ukraine" Igor Sikorsky Kyiv Polytechnic Institute ", a mantle and a memorable sign to the Honored Professor of Material Science, founder and director of the Institute of Nanotechnologies of A.J.Drexel University (USA), a doctor of technical sciences Yuriy Heorhiyovych Hohotsi was held at the meeting of the Academic Council of Igor Sikorsky KPI.

The ceremony was opened by the rector of Igor Sikorsky KPI Academician of the National Academy of Sciences of Ukraine Mykhailo Zgurovsky. He spoke about the way of life, outstanding scientific achievements and a significant personal contribution of Yuriy Hohotsi to the development of educational and scientific cooperation of Igor Sikorsky KPI with the Institute of Nanomaterials of Anthony Joseph Drexel University (USA).

After that, Yuriy Hohotsi was awarded the appropriate awards.

Yuriy Heorhiyovych Hohotsi is a citizen of Kyiv. He was born in 1961 in the family of the famous Ukrainian scholar Professor Heorhiy Hohotsi. He is connected to the National Technical University of Ukraine "Igor Sikorsky Kyiv Polytechnic Institute” not only as a scientist, but also as his graduate - in 1984 Yuriy Hohotsi graduated from the Faculty of Engineering and Physics of the KPI department of high-temperature materials and powder metallurgy and in two years he became a candidate of chemical sciences (he wrote theses at the Department of Physical Chemistry, Faculty of Chemical Technology under the guidance of Professor Volodymyr Lavrenko). Besides, the family members of Yuriy Hohotsi - his father, brother and sister, who attended the ceremony, also graduated from KPI at different times.

However, Yuriy Hohotsi worked and studied not only at KPI. In his work biography there are also pages related to I. I. Frantsevich Institute of Materials Science Problems of the National Academy of Sciences of Ukraine, where he received a doctorate degree in technical sciences in 1995. Notable milestones on his research path were also internships and work at the University of Karlsruhe (Germany), Tokyo Technical University (Japan), the University of Oslo (Norway), the University of Tübingen (Germany) and Illinois University in Chicago (USA). Since 2003, he has been a Professor of Materials Science, Honored Professor at Drexel University, where he founded the Institute of Nanotechnologies.

Professor Yuriy Hoghtski and his colleagues synthesized and explored a whole family of fundamentally new two-dimensional nanomaterials - maxions (MXenes - two-dimensional transition metal carbides and nitrides - new materials with new properties that were previously unknown and which can become the basis for storing electric energy and manufacturing new electronic devices) He developed a general approach to the synthesis of porous and low-dimensional materials using selective extraction of elements / components that can be used to create nanoporous carbon, carbon nanotubes, graphene, 2D carbides and others. In addition, Professor Hohotski discovered and described new forms of carbon - conical and polygonal crystals. Yuri Hohotsi also discovered a new metastable silicon phase. He was the first to show the presence and abnormally slow advancement of water in carbon nanotubes by electron microscopy and a lot of other things.

After rewarding Professor Hohotsi addressed the audience with a short nomination lecture devoted to the past and prospects of Igor Sikorsky KPI development as the leading institution of higher technical education in Ukraine.