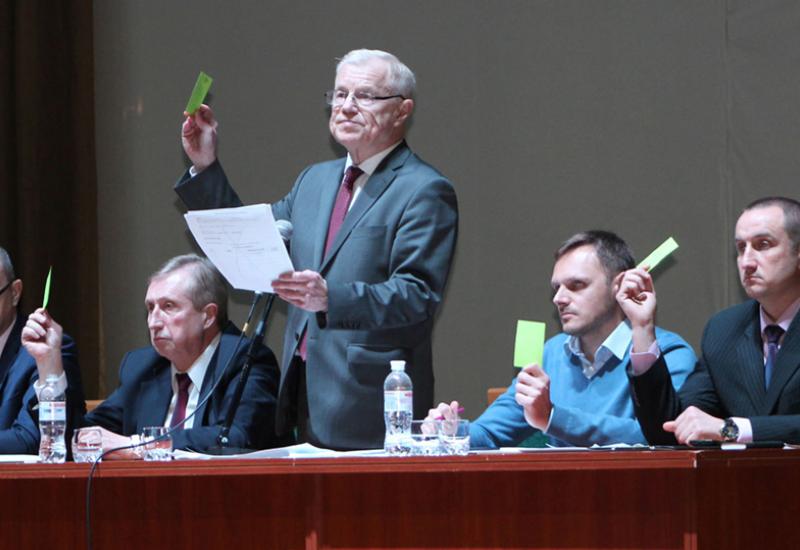 University rector M.Z. Zgurovskyi made a report to the administration on the implementation of the Collective Agreement for the period from April 2017 to April 2018. He described in detail the activity of the University in all major areas: educational work, research and innovation activities, projects of perspective development, international relations, administrative and economic work. In the beginning of the speech, the rector greeted those present with the International Day of Astronautics, and noted that the first flight of human space into space was realized by a former KPI student Sergiy Korolyov. M.Z. Zgurovskyi recalled that the current conference of the labor collective of our university is the thirtieth, and that it is for the first time held without the initiator of these conferences, the long-term chairman of the trade union committee of employees V. I. Molchanov, who died in August last year. In the final part of his report, the rector analyzed the implementation of all eight sections of the Collective Agreement and its annexes and concluded that the contract was implemented as a whole.

O. M. Yatsun, head of the Kyiv city organization of trade union of education and science workers of Ukraine, in his speech, reported on the measures that the organization headed by it is taking and plans to use to abolish decisions of the Cabinet of Ministers of Ukraine, which worsen the financial position of university teachers. He did not rule out the possibility of entering a trade union in a labor dispute with the government.

Then the rector M.Z. Zgurovskyi, the first vice-rector Yu.I.Yakymenko, the chairman of the trade union committee of students A.Yu.Gavrushkevich, the director of the campus O.A.Ischenko gave answers to the written questions submitted to the presidium.

On the proposal of Deputy Chairman of the trade union committee V.O.Korsakov, the delegates approved the report of the rector and chairmen of the trade union committees and recognized that the Collective agreement for 2017 and the first quarter of 2018 was fulfilled in general. The delegates also approved and recognized the satisfactory performance of the rector for the reporting period.

Subsequently, under the chairmanship of Yu.I.Yakymenko, at the request of the representative of the drafting commission of the deputy chairman of the trade union committee, the conference considered and approved all sections of the Collective agreement and the Collective agreement for the period from April 2018 to April 2019 with editorial revisions , proposed by the working commission.

Finally, the conference approved the composition of the Commission for Labor Disputes and the Council on housing and social and household issues.