Visit of the Prime Minister of Ukraine Volodymyr Groisman (video) 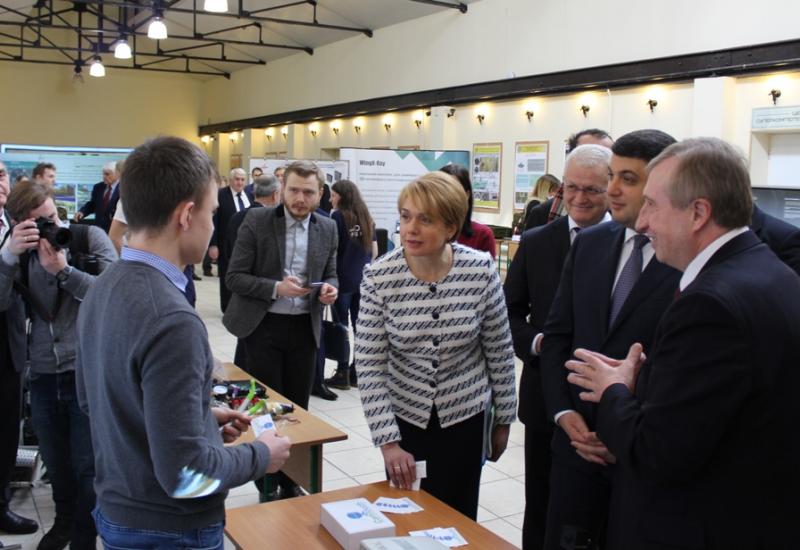 He was accompanied by Minister of Education and Science of Ukraine Liliia Grinevych, First Deputy Chairman of the Verkhovna Rada Committee on Science and Education, Oleksandr Spivakovskyi, Head of the Subcommittee on Higher Education, responsible staff of the Cabinet of Ministers of Ukraine and central bodies of executive power.
The visit began with the laying of flowers to the stand with photos of students, staff and university graduates who gave their lives for the independence of our Motherland during the Revolution of Dignity and in the unpardonable war on the Donbass.

After a brief excursion to the university and a review of the exposition of the State Polytechnic Museum of the KPI, the Prime Minister moved to the Center for Innovative Entrepreneurship, where he visited the exhibition of startups created in the Innovation Environment “Sikorsky Challenge” and talked with their authors. There were presented almost thirty innovations in various fields: space and aircraft, military-industrial complex, cybersecurity, education, water purification and water treatment, information technology, energy, transport, etc. These projects became a clear demonstration of the effectiveness of the model elected by Igor Sikorsky's KPI for organizing the interaction of education, science and business. Explanations on the peculiarities of individual developments were given by the rector of the KPI, Academician of the National Academy of Sciences of Ukraine Michael Zgurovskyi, Vice-Rector for Scientific Work, Academician of the National Academy of Sciences of Ukraine Myhailo Ilchenko and, of course, their authors. Additional evidence of the effectiveness of the policy of convergence of research and development teams and business entities operating in the real economy is the projects being implemented, or already implemented in the production of Ukrboronprom enterprises and the State Space Agency of Ukraine, which are part of the Innovative -production platform “Kyivska Polytechnica”.

Detailed information on the organization of innovation activities in the Igor Sikorsky KPI was given by Michael Zgurovskyi in a report “Igor Sikorsky KPI as a model of high-tech economy of Ukraine” during discussions with representatives of the authorities, industry, business and authors of innovative developments of mechanisms for accelerating the innovative development of the economy of our country. “The purpose of our innovative environment is to combine the talents and ideas that we have in the country with many, with the capabilities of high-tech businesses and to attract capital, mostly private, for the co-ordinating role of power,” he emphasized in his speech. And added that, according to Forsight's data of the Ukrainian economy, performed at the university, provided that such a model would be implemented throughout the country by 2025, Ukraine could raise high-tech exports from the current 3.5% to 20%, which, in turn, allowed it to increase its contribution to GDP of the country significantly (at times!). Having finished his speech, the rector lists a number of problems that hinder the activities of innovative structures and the development of the economy, and the solution of which depends on the decisions of the authorities. This, above all, overlapping the procedures for creating and closing startup companies – they need to be simplified. It is also an outdated principle of public funding for fundamental science and research - they need changes that take into account the real impact of such investments, and so on.

Volodymyr Groisman began his speech with the remark that it is very good that the representatives of all those institutions and structures that can influence the adoption of the necessary decisions for the country and ensure their successful implementation take part in the meeting. “We have to build a truly strong, modern state. The basis of this state should be modern, developed national economy, - he stressed. “And we will never be able to provide a qualitative breakthrough without proper support and opening up of opportunities for the development of science and innovation within our country.” He also dwells on the reasons for the containment of economic development. One of the most important of them, according to him, is the overregulation of all spheres of life. “We have to be more mobile. Time is important!”, - said the Head of the Cabinet of Ministers. In order to provide the necessary prerequisites for accelerating the development of science and technology, the Government creates new platforms for decision-making – the National Council for Science and Technology Development, the Council for the Development of Innovative Technologies, the Fund for the Support of Startups - and the financial mechanisms for supporting innovation. And this, according to the Prime Minister, is just the beginning. He also spoke about the need to make changes to the science financing system. However, from his point of view, it is not possible to propose appropriate changes to it without the participation of the scientists themselves. Therefore, the Head of Government initiated the convening of the Council of Science and Technology, which should discuss the transition of Ukrainian science from the model of retention to investment in development.

“We are interested in the development of the economy. Without you, without science, without innovation, it is impossible to do this. The capacity of this sphere is very high. I am ready to make system decisions as quickly as possible so that competition develops, and all have equal opportunities for receiving state support. I have a political will on this,” stressed Volodymyr Groisman.

In the photo: Minister of Education and Science of Ukraine Liliia Grinevych, Vice-Chairman of the Verkhovna Rada of Ukraine Committee on Science and Education Oleksandr Spivakovskyi, Prime Minister of Ukraine Volodymyr Groisman and Rector of the Igor Sikorsky KPI Michael Zgurovskyi near one of the stands of the exhibition