On the 150th anniversary of the birth of Nikolai Fedotovich Bilyashivsky 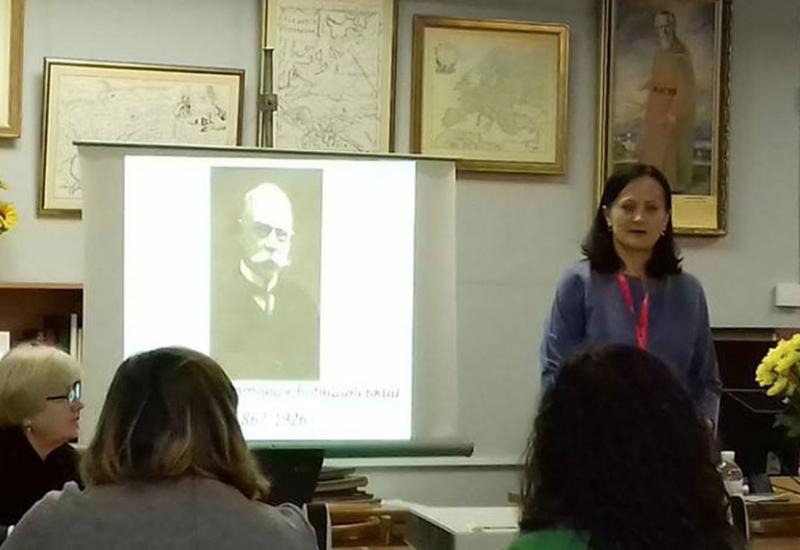 On October 17, the library hosted a round table discussion dedicated to the anniversary of Nikolai Fedotovich Bilyashivsky. On this day, came to us experts from the museum and library business from various Kyiv cultural and educational institutions. Among them was the grandson of Nikolai Fedotovich - Nikolai Nikolayevich Bilyashivsky, a member of the Taras Shevchenko National University Museum. His story about an outstanding grandfather was bright and full of many interesting family details.

Director of the State Polytechnic Museum N.V. Pisarevska told about the great importance of MF Bilyashivsky's activity for preserving the Ukrainian cultural heritage.

The main specialist of the State Archives of the Kiev Region R. Ya. Kovalenko became a participant of the round table, which examined the life and work of Nikolai Fedotovich through personal documents of the scientist (letters, questionnaires, applications) preserved in archival collections.

The story of the scientific secretary of the National Art Museum of Ukraine Yulia Zinoviyeva about the formation of the museum library was also interesting, it was one of the important tasks of Bilyashivsky when creating the Kiev Museum of Antiquities and Arts. A lot of literature was presented by various organizations and individuals: it is likely that the experience of encouraging donors, which the scientist received while working at the Polytechnic Institute, was useful here.

Researcher of the National Kiev-Pechersk Historical and Cultural Reserve Anastasia Cherednichenko acquainted the audience with the activities of the Museum Town on the territory of the Kiev-Pechersk Lavra in the early 20s of the 20th century, while Alexander Ischuk, the head of the history department of the National Historical Museum of Ukraine, 100 Years of the Ukrainian Revolution, the Restored State, "held in March this year in the halls of the museum and represented little-known artifacts from the times of the Ukrainian Revolution of 1917-1921.

Very interesting was the performance of the long-standing active user of the library of Kiev Polytechnics, the leading editor of the newspaper "Kiev Polytechnic", TN V.M. Ignatovich. He spoke about the importance of books on physics published during the second half of the XIX century. - the first third of the twentieth century. To solve its current problems. The study of these books makes it possible to get acquainted with the methodology of classical physics and to look at its modern problems with fresh eyes.

At the end of the meeting, the staff of Rare and Valuable Documents Department acquainted visitors with the historical collections of the university library - books from the libraries of Professor M.I. Konovalov, an outstanding engineer and organizer of railway business in Ukraine, AP. Borodin, professors and teachers of the Kiev Polytechnic XVIII - early XX century. demonstrated historical documents - the library's inventory books from 1898, reports on the activities of the institute in the first years of existence, lists of students and teaching staff by 1917.

University television studio KPItv has shot a short video in memory of an outstanding Ukrainian scientist.

The meeting in the library lasted a long time and was fruitful both for the guests and for the staff of the university library. And already there are plans for the future, because the next year will be a jubilee for our university and we have many interesting topics for historical research.

Marina Miroshnichenko, head of the department. Department of rare and valuable documents of NTV them. I. Denisenko