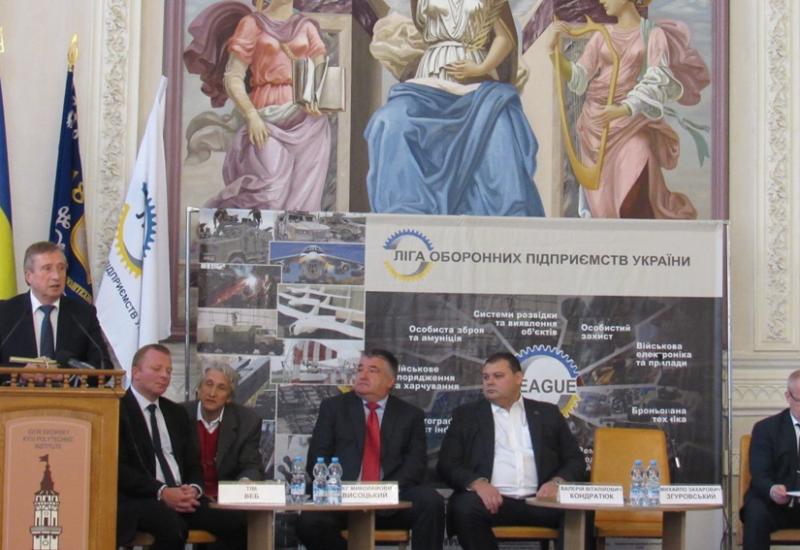 On September, 29, the KPI hosted the events devoted to I Ukrainian Forum of Private Military Industry Enterprises.

The opening of the Forum and acquaintance of the participants with the exhibition of full-scale samples of defense products, manufactured at enterprises of private ownership, as well as promising developments in military equipment, took place on the eve of the 28th of September. The events took place on the territory of Private Joint-Stock Company “SPA “Praktika” – an enterprise that produces military armored vehicles, which are already supplied to the Armed Forces of Ukraine and the National Guard. 36 enterprises and organizations presented their products. The National Technical University of Ukraine “Igor Sikorsky Kyiv Polytechnic Institute”, which, together with the League of Defense Enterprises of Ukraine, made the organizer of this Forum, presented nine of its designs at this exhibition, some of which are already in service. Participation in the opening ceremony of the Forum and exhibition was taken by Secretary of the National Security and Defense Council of Ukraine Oleksandr Turchynov, representatives of the Department of Defense Investment of the International Staff, Presidential Administration, Ministry of Defense of Ukraine, Ministry of Economic Development and Trade of Ukraine, heads of private defense enterprises and research and academic institutions.

The second day of the Forum, events of which were hosted by the Igor Sikorsky Kyiv Polytechnic Institute, was devoted to discussing the most urgent issues of the organization of the development and production of equipment and weapons. Therefore, the high-ranking officials of the Ministry of Defense took active part in it along with the other law enforcement agencies, the State concern “Ukroboronprom”, top managers of private defense enterprises, leading Ukrainian scientists and engineers.

On behalf of the President of Ukraine, the Forum’s participants congratulated the Deputy Head of the Presidential Administration Valery Kondratyuk. “Under conditions of Russian aggression, the provision of the Armed Forces of Ukraine and other military formations and law- enforcement agencies with modern weapons, military equipment, and ammunition is carried out not only by Ukroboronprom's enterprises, but also by private enterprises” he said. “Private defense companies, in close cooperation with leading scientific institutions, play an important role in the development of modern weapons”. The participants were also congratulated by Deputy Minister of Economic Development and Trade of Ukraine Yuriy Brovchenko, head of the Department of Defense Investment of the International Secretary Office of NATO Tim Web, chairman of the Board of the League of Defense Enterprises of Ukraine, Chairman of the Board of Directors of PJSC “Scientific Production Association “Praktyka” Oleg Vysotsky.

“The defense industry’s activities on the creation of modern weapons are impossible without the use of the achievements of advanced science and practical knowledge, without the support of such projects by scientists” said Michael Zgurovskyi, the academician of the National Academy of Sciences of Ukraine, rector of the Igor Sikorsky Kyiv Polytechnic Institute.

For these reasons in the first set of issues discussed in the scopes of the Forum program the organizers raised the question of using domestic scientific potential in the development of new types of weapons and products for the needs of security structures. This panel was called “DlC and Science”. The first at its meeting was the vice-rector for the scientific work of the KPI, academician of the National Academy of Sciences of Ukraine Myhailo Ilchenko. He spoke about the traditions, experience, current state and opportunities of cooperation of Igor Sikorsky Kiev Polytechnic Institute with enterprises of the military-industrial complex, as well as on the most important developments on the defensive themes of specialists of the KPI in recent years. Then the negotiations were directed to specific areas in which university researchers work, to their achievements, and the challenges they face when working on projects and implementing their results.

The problems, from which the defense capabilities of the state depend, were discussed in two sections-panels, “Stages of development (modernization) and acceptance (delivery) of samples of armaments and military equipment to the Armed Forces of Ukraine” (the participants were talking about the organization of development and production of the latest weapons from the preparation of a technical task to state tests and arming, etc.), “Export of defense products” (it referred not only to export procedures, but also to the creation of system of certification standards such as STANAG requirements for the transition to NATO standards). The moderator of the first of these meetings was the Chairman of the Supervisory Board of the League of Defense Enterprises of Ukraine, the eleventh Prime Minister of Ukraine (2005-2006), the ninth Minister of Defense of Ukraine (2007 - 2009) Yuriy Yekhanurov, the second was the Deputy Minister of Economic Development and trade of Ukraine Yuriy Brovchenko.

Consequently, the Forum became a platform where representatives of science, industry and government discussed ways to overcome common problems of scientific institutions and defense enterprises, both state and private, and to ensure their capacity at all levels inside and outside the country. This, in turn, will strengthen the potential of the domestic military-industrial complex and provide real prerequisites for establishing a public-private partnership in this vital area for Ukraine.

On the photo: Academician of the National Academy of Sciences of Ukraine Michael Zgurovskyi, Rector of the Igor Sikorsky Kyiv Polytechnic Institute congratulates the participants of the forum.