Lecture on the future of electronics by professor Rao Tummala 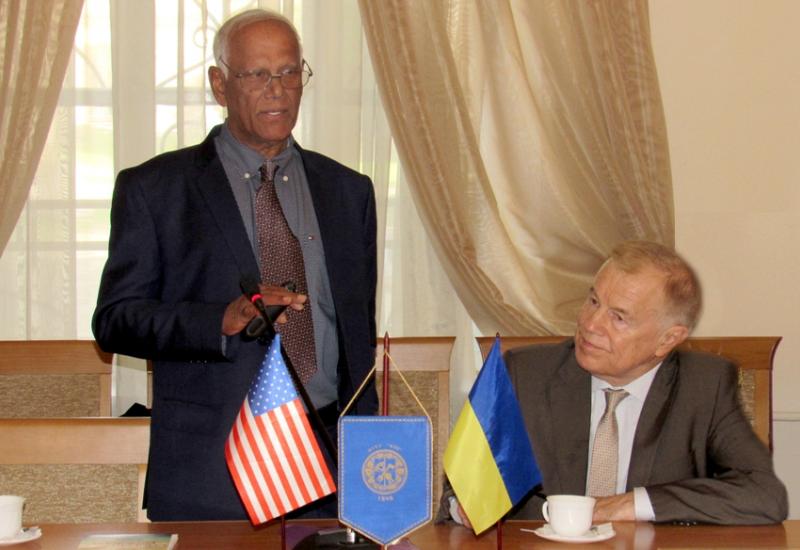 On September 14, Rao Tummala, a world-famous scientist, a professor at the Georgia Institute of Technology (Georgia Tech or GT, Atlanta, USA), a director of The Packaging Research Center (RRC) Georgia Tech, a member of the National Academy of Engineering Sciences of the United States, delivered a lecture to the students, postgraduates and teachers of the Faculty of Electronics in the framework of Summer School of the Igor Sikorsky KPI "Technology for Future" and scientific cooperation.

The activities of the Center, which is headed by Rao Tummala, focuses on solving complex, interdisciplinary problems of creating next-generation electronic systems and determining trends and development of roadmaps of relevant modern technologies. The Center works in two directions: research and design of new systems; training of specialists for working in the field of electronics.

Therefore, professor Tummala's lecture was devoted to the future of electronics and the training of engineers for this industry, which, according to the American researcher, has already become global. Rao Tummala built his lecture on the development of an idea formulated in 1966 in famous Moore's law. This law is based on an empirically discovered pattern according to which new models of microcircuits are developed through more or less the same periods (18-24 months) after the appearance of their predecessors. At the same time, their capacity grows every time approximately twice. This law is still valid today.

The American researcher said that nowadays the main trend in the development of electronics is the integration processes - both at the level of the electronic systems themselves, which combine elements for different purposes, and at the production (mostly dozens or even hundreds of different companies from different countries are involved in the development and production of new electronic devices) and educational levels. It should be noted that Georgia Tech approaches to the curricula of students, who will work in the field of electronics, overlap in many respects with the approaches to the engineers’ training in the Igor Sikorsky KPI, which is based on interdisciplinarity. After all, a modern specialist, especially one who will develop new electronic systems, must also understand mechanics, materials science, chemistry, etc. By the way, that is why the university introduced interdisciplinary master programs for students of the Faculty of Electronics and others.

Professor Tummala also visited the faculty laboratories and talked with his teachers and researchers.

In the photo: professor Rao Tummala and the first pro-rector of the Igor Sikorsky KPI of the National Academy of Sciences of Ukraine Yuri Yakimenko during the lecture