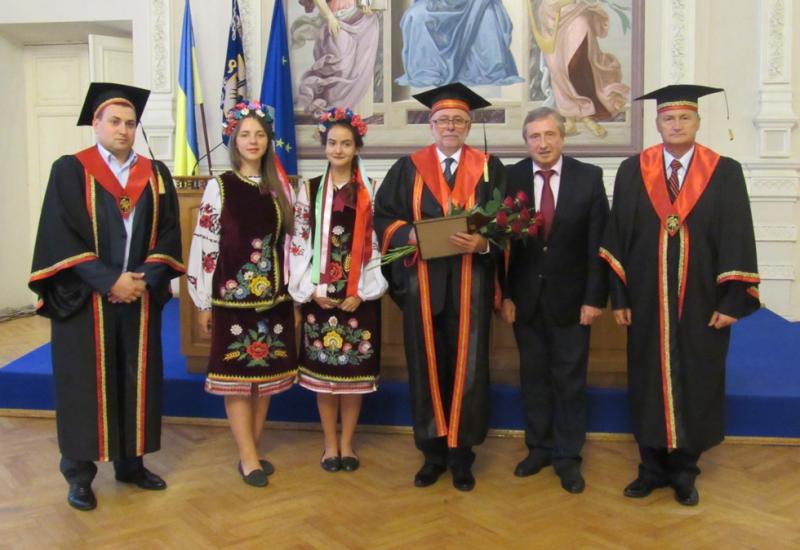 On September, 4 in the Hall of Meetings of the Academic Council of the KPI was held a solemn ceremony of awarding the diploma “Honorary Doctor of the National Technical University of Ukraine “Igor Sikorsky Kyiv Polytechnic Institute”, a mantle and a memorial sign to the famous Polish scientist, rector of the Warsaw Polytechnic Jan Schmidt.

The solemn meeting of the Academic Council of the University was attended not only by its members, but also by researchers participating in joint Polish projects. The number of such projects increases with every year. The rector of the Warsaw Polytechnic, Jan Schmidt, constantly contributes to this. Given that Jan Schmidt not only heads the Warsaw Polytechnic, but is also the President of the Conference of Rectors of the Academic Institutions of the Republic of Poland, his influence on the processes of rapprochement of the universities of both countries is very significant.

The story of life and achievements of Jan Schmidt was told by the rector of the KPI, academician of the National Academy of Sciences of Ukraine Michael Zgurovsky.

Jan Schmidt is not only a prominent organizer of educational and scientific activities, but also a renowned scientist in the field of microelectronics and optoelectronics. Upon graduating from the Faculty of Electronics and Information Technologies of Warsaw Polytechnic in 1976, he stayed there and came through all stages of the academic career, from a post-graduate student to a university head. In 1985 he received the title of PhD (corresponds to the degree of Candidate of Sciences in Ukraine). In 1995 he received the title of Doctor Habilitated (Doctor of Science). In 1999 he was appointed professor, 6 years later he received a professor's degree. He participated in many international research programs, trained at Carnegie Mellon University in Pittsburgh, USA. He was a secretary and member of the Bureau of the Electronics and Telecommunications Committee of the Polish Academy of Sciences. In Warsaw Polytechnic, he held the post of Head of the Laboratory and Optoelectronic and Hybrid Systems Division, Deputy Dean for Development (2002-2005), Head of the Department of Optoelectronic and Hybrid Systems, Department of Microsystem Technology and Electronic Materials and Dean (2008-2012), Department of Electronics and information technology. On March 14, 2012, he was elected as Rector of the Warsaw Polytechnic with a term of office of 4 years, and on March 16, 2016, he was re-elected for this position for the next four-year term. During all these years, he is doing a lot to establish and strengthen the scientific and cultural contacts of the university headed by him with the Igor Sikorsky Polytechnic Institute.

Therefore, given the outstanding scientific achievements and significant personal contribution of Jan Schmidt to the development of cooperation between the Warsaw Polytechnic University and the KPI and in general to the universities of the Republic of Poland and Ukraine on February 16, 2017 the Academic Council of the KPI “decided to celebrate his activity and to award him the title “Honorary Doctor of the National Technical University of Ukraine “Igor Sikorsky Kyiv Polytechnic Institute”. The Diploma of the Honorary Doctor, as well as the mantle, the bonus and the corresponding memorable sign were handed to him on September, the 4th.

After the ceremony, Professor Schmidt read a nominee lecture on reforming the system of science and higher education in Poland. Given the active cooperation between Ukrainian and Polish universities and joint work in a number of European projects, his arguments on this subject were not only interesting, but also relevant for Ukraine and for the KPI – in particular.