The 5th Economic Forum of Ukraine-Korea 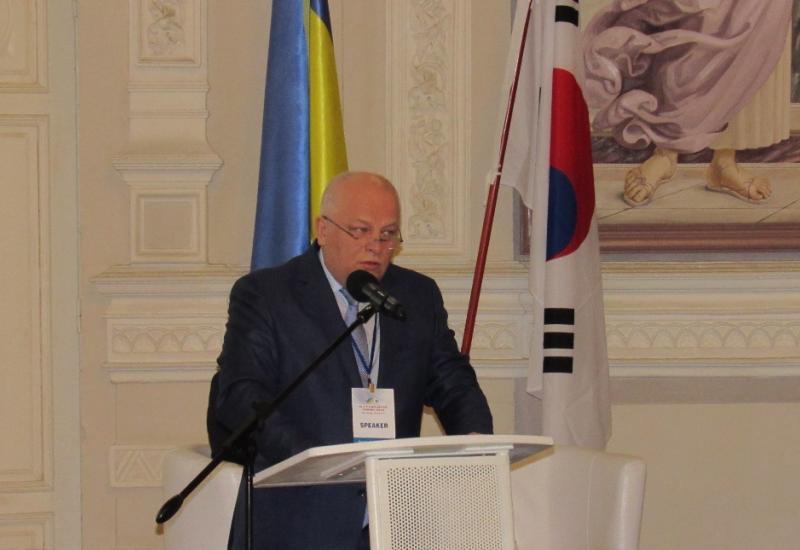 On July 28, the 5th Economic Forum of Ukraine-Korea "Economic Cooperation in the Context of Euro-Asian Integration" was held at the National Technical University of Ukraine "Kyiv Polytechnic Institute n.a. Igor Sikorsky".

The forum's organizers were the Embassy of the Republic of Korea in Ukraine, the SS “High-Tech Office Ukraine” and National Technical University of Ukraine "Igor Sikorsky Kiev Polytechnic Institute".

The Ministry of Economic Development and Trade of Ukraine, the State Innovation Finance and Credit Institution, the Ukrainian Chamber of Commerce and Industry, the U.S. -Ukraine Business Council also provided support and assistance.

The main purpose of the forum - to establish effective cooperation between Ukraine and Korea - was stated in the preamble to its program in the chapter "Goals of the Forum": Creation of a network for promoting bilateral economic cooperation between Korean and Ukrainian governments and business institutions; studying new ways of cooperation between Korea and Ukraine in various spheres of economy in the process of restructuring and reforming Ukraine. Therefore, this event has become a platform for representatives of the legislative and executive authorities of Ukraine, the diplomatic corps, as well as businessmen and key players of the Ukrainian and Korean markets for communication and access to specific projects.

A number of issues were discussed at the forum: bilateral economic cooperation between Korea and Ukraine: opportunities and perspectives in the context of Eurasian integration; the synergistic effect of Korea and Ukraine in the development of the Ukrainian agrarian sector; promotion of international cooperation in the field of ICT and support of global and multicultural start-ups between Korea and Ukraine; infrastructure and logistics of international economic communication and development, etc. The agenda was clarified during the preliminary discussion that took place on the eve of the official opening of the forum on the evening of July, 27. Its members were members of the organizing committee from South Korea and Ukraine, representatives of governmental structures, business and scientific organizations of both countries. They discussed ways and means of implementing the joint Ukrainian-Korean agricultural project, the implementation plan of the General Plan of Economic Cooperation, the problems of the development of "Digital Ukraine" in the context of cooperation between Ukraine and Korea, the issue of establishing a permanent platform for the Economic Cooperation Forum of Korea and Ukraine, etc.

However, the official work of the forum began the next morning. The First Vice Prime Minister of Ukraine, Minister of Economic Development and Trade of Ukraine Stepan Kubiv opened his opening speech emphasizing the very significance of this event for the development of bilateral relations: "I congratulate all the participants of the Fifth Economic Forum" Ukraine -Korea". It is a platform for dialogue, discussion, search of important decisions and the commencement of joint projects. For in the modern world the competitiveness of the economy depends on human capital, information, innovations, technologies and the level of infrastructure development. "

Michael Zgurovsky, the rector of the “Igor Sikorsky Kyiv Polytechnic Institute”, the academician of the National Academy of Sciences of Ukraine told about one of certain directions of deepening cooperation at the opening ceremony . "We have a certain, very positive experience of cooperation with the Republic of Korea. For eight years the Ukrainian-Korean IT Center has been working effectively on the basis of our university, "he said. "But at the initiative of the Ambassador of the Republic of Korea, Mr. Lee Young Gu, we are now expanding the Center's activities, and since September this year we are launching the creation of the Ukrainian-Korean Center for Education, Science and Innovation. This center should be a bridge between the two countries to expand bilateral cooperation. "

Participating in the opening ceremony and the first after the round-table discussion on "Economic cooperation" also took the deputy head of the Presidential Administration of Ukraine Dmytro Shymkiv Ambassador of Ukraine to the Republic of Korea Lee Young Gu, former Prime Minister of the Republic of Korea Chung Unchhan , Chairman of the Verkhovna Rada of Ukraine on Information and communication Alexander Danchenko, MP of Ukraine Sergey Larin, President of "Grant Thornton Ukraine" Alexander Chaly and others. Dmitry Shymkiv has also formulated the main directions in which it would focus in the discussion on the agenda of the forum, and, in general, when planning ways to deepen cooperation between our countries. It is an agrarian sector, high technology, military-technical cooperation and energy.

Actually, these key areas for cooperation were discussed at the events and the second part of the forum. It was held in sessions whose names were speaking for themselves: "Trade and Investment", "Agricultural cooperation", "ICT cooperation in the high technology sector."

The topics discussed by participants are important for both countries. In particular, the first discussed issues, not only trade and economic cooperation, but also the revitalization of investment activity in all areas of interest to business, posed challenges for the future, and even considered proposals for the establishment of a Master Plan for Korean-Ukrainian cooperation. The second proposed were the concepts and strategies for cooperation between Ukraine and Korea in the agrarian sector (note that such cooperation can be very productive and mutually beneficial). And, of course, the third panel session was extremely interesting and was dedicated to the development of cooperation in the field of information and communication technologies, in which the Republic of Korea is one of the recognized world leaders. By the way, in this session, in the context of the increasingly widespread introduction of ICTs into new spheres of life and new opportunities for the transition of entire states to the sustainable development model, the experience of KPI was considered in creating an innovative environment, or, more precisely, ecosystems, Known as the "Sikorsky Challenge", which performance has already been confirmed by life. Participation in all discussions was taken by representatives of public administration and business, as well as representatives of staff from Korean and Ukrainian universities. So, the organizers' expectations that the Forum at the KPI not only will help participants deepen their knowledge of Ukraine and Korea and establish direct business contacts, but will also launch new joint programs and projects, have very serious grounds for them..