The Success Of Electrochemists - Teachers And Students 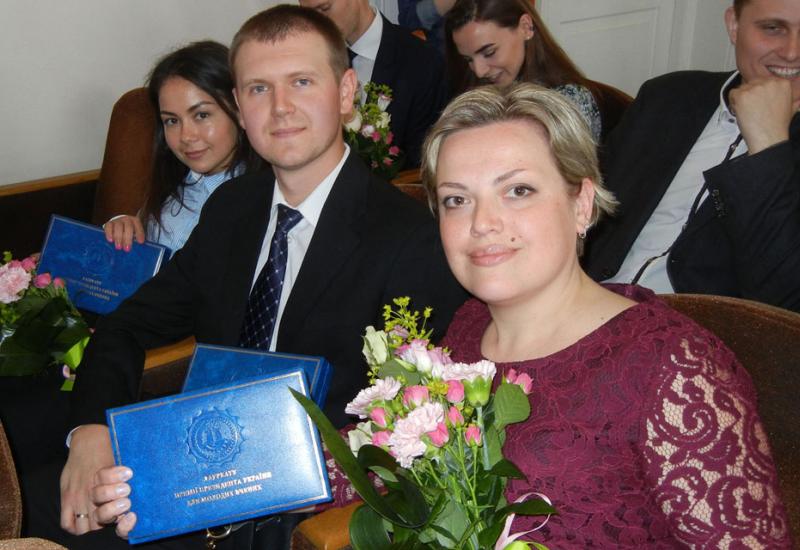 Two pleasant events took place on the eve of the Day of Science of Ukraine, which this year was celebrated on May 20at the Department of Electrochemical Productions Technology (EPT) of the Chemical Technology Faculty of the KPI

The President Of Ukraine Award For Young Scientists

The President Of Ukraine Award For Young Scientists 2016 was received by young scientists at EPT Department, Dr.-Ing. associate professor S.V. Frolenkova., Dr.-Ing. assistant G.S. Vasiliev, and also assistant of Faculty of Chemical Technology Dr.-Ing. V.I. Vorobyova for the work "New inhibitors to prevent corrosion." The important scientific and technical problem of the complex preservation of the metal fund of Ukraine, which is used in natural and man-made conditions - in water or air environments of various aggressiveness, was solved in the work.

The reward was held on 19th of May, 2017 and was timed to the Day of Science. The participants were greeted by the President of the National Academy of Sciences of Ukraine Academician B.E.Paton

From 16 till 19 May, 2017, the II stage of the Open All-Ukrainian Student Olympiad on the specialty "Technical Electrochemistry" was held on the basis of EPT department. The students from the NTU Kharkiv Polytechnic Institute (NTU "KhPI"), the Ukrainian State Chemical Technology University (USUCT), the Khmelnytsky National University (KhNU), the Belarusian State Technological University (BSTU) – Minsk, the Kiev National University of Technology and Design (KNUTD), the Igor Sikorsky KPI took part in the Olympiad.

Participants of Olympiad were solving the competition tasks in four sections: "Theoretical electrochemistry", "Galvanic", "Chemical current source", "Corrosion". The tasks were assessed by the jury, which consisted of representatives of all universities whose students took part in the Olympiad. According to the results of evaluation of competition works, winners and prizewinners were found.

For a high level of performance in a separate section of the Olympiad, the diplomas received:

Diplomas for the distinctive olympiad works were awarded:

Diploma "For the will to win" received Nataliya Novitskaya (KNU) for diligence and efforts to succeed.