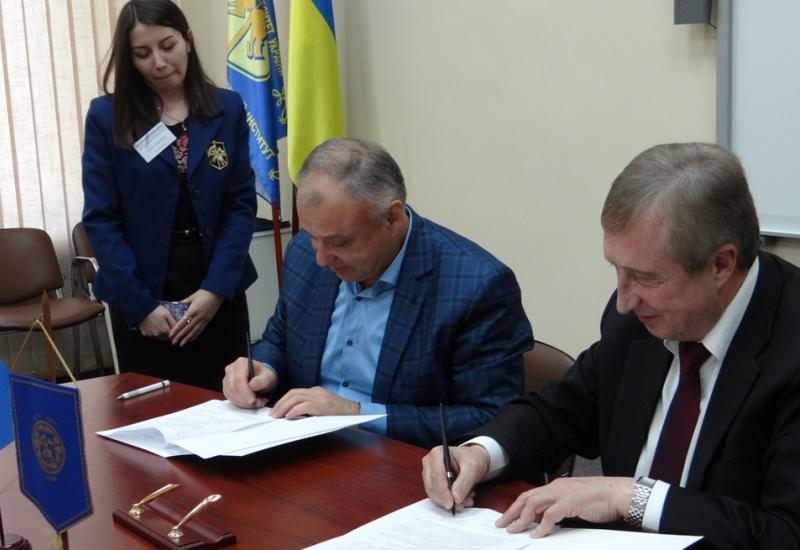 In May, 18 there was a Cooperation Agreement signed between the university and Institute of Space Research of National Academy of Science of Ukraine and State Space Agency of Ukraine.

Rector of Ukrainian NAS, Mykhailo Zgurovsky signed the agreement on behalf of the university, on behalf of Institute of Space Research – his director Oleg Fedorov.

Academic Center of space research and technologies (CSRTZ) is being created with the purpose of scientific and technical work organization and coordination between Igor Sikorsky Kyiv polytechnic institute and Institute of space research of NASU – SSAU in the field of research and space application. Pro-rector for research work, academician of Ukrainian NAS, Mykhailo Ilchenko is appointed its head on behalf of Igor Sikorsky Kyiv polytechnic institute and director of the institute Oleg Fedorov on behalf of Institute of space research. The activity coordinators are: pro-rector deputy for research work Vitalii Kotovskyi on behalf of the university, on behalf of Institute of space research of NASU – SSAU – senior research officer Lev Semenov. Composition of CSRTZ Board has been also appointed; it consists of eight and eight representatives from the university and institute. As a part of Center three working groups in the following fields of study will be formed: “Information technologies and systems”, “Scientific and service equipment of space vehicles, micro- and nano-satellites” and “Staff training and educational activities”.

Before document signing, ceremony participants – among them on behalf of ISR the heads of almost all its research subdivisions, on behalf of Igor Sikorsky Kyiv polytechnic institute – pro-rector for research work, academician of Ukrainian NAS, Mykhailo Ilchenko and heads and leading scientists of faculties and subdivisions the activity of which are connected with space –discussed cooperation lines, further common actions and specific projects and work on them.

One of the projects is «Horizon 2020 ERA-PLANET» was presented by the deputy head for research work of Institute of space research, Professor Nataliia Kussul. It aims at creating European Research Area in the field of Earth research by enhancing participation of European research structures in programs of Group on Earth Observation (GEO) and Copernicus – thus the programs of research and monitoring processes that appear on our planet by Earth remote sensing techniques. The project financing by European commission makes up 11 million Euros. Besides, the part relating to the area of particular countries has to be funded by participating countries. In general, 35 European scientific organizations take part in this project. Coordinator from Ukraine is Institute of space research of NASU – SSAU, at the same time European commission in our country allocates nearly 500 thousand Euros for the realization of this project
Thus, the main functions and activity lines of the Center will relate to: finding solution of research and applied tasks in terms of project realization that are part of Nation-wide target scientific and technical space program of Ukraine as well as other international, national and departmental programs; regular engagement of students and young scientists into realization of modern projects oriented towards international cooperation; realization of academic, educational and promotional space and technology programs; creation of laboratory and test base for perspective working load instruments and space vehicles support systems; development of new information technologies, information and communication means for perspective control stations and space information processing, staff training in the study area “Aerospace research and technologies” of mathematical and engineering sciences; finding solution to educational, scientific and technological priority tasks of space research and aerospace technology development etc.

The working meeting of CSST Board participants for discussion and defining particular work plans of newly created structure will take in the near future.