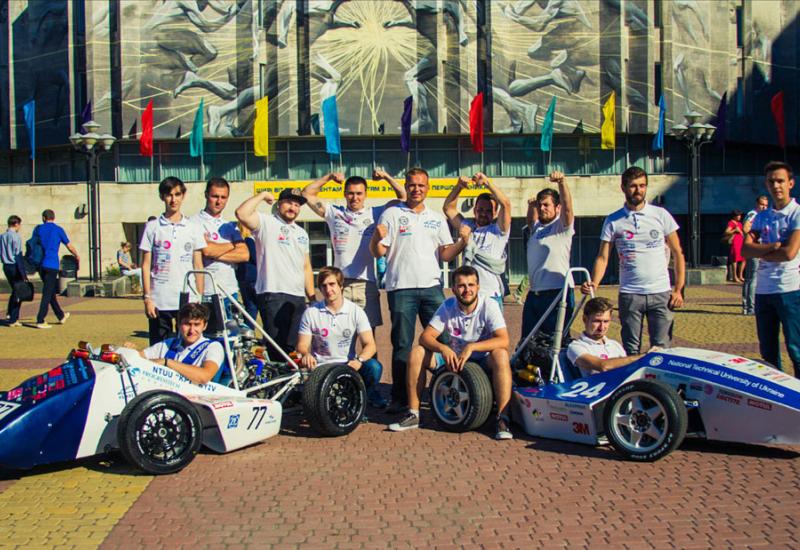 Two years ago in our university on the initiative of head of the department of Integrated Technology of Mechanical Engineering prof. V.A.Pasichnyka was created a student team under his leadership, that projected and manufactured car race of series "Formula Student" (Formula SAE). With this car the team participated in international competitions that took place in Czech city Most. This year's team is partially renewal of the composition projected and manufactured a new race car that is presented at the international competition, which presented at the international competition in the Hungarian city of Gyor. Says the team captain Cyril Teplyakov.

When designing a new race car the main objectives in a reduction of its weight, increase engine power and efficient use of new technologies. To reduce the weight of race car we have developed a new steering system and drive system, and a new chassis.

The new steering system was designed with fewer parts while maintaining of characteristics. This could not only reduce the weight, but also to facilitate installation. Reducing the weight of the differential to 1.2 kg achieved through the use of smaller satellites and processing technology on modern machines of company "Haas". The car became more powerful through the use of a new engine on a motorcycle Honda CBR 600 RR, with capacity of 144 hp and create its own electronic control unit on the basis of Megasquirt ECU.

The new chassis used tubes with walls with different thickness, allowing the frame to reduce weight by 15%. Pipes cut by laser on subenterprises Laser CWM; there has been created for new stocks frame. The frame is welded by TIG technology by the students themselves; welding equipment were presented the team by the company Binzel Abicor. Modernized a suspension bracket push-rod type: was modified layout of shock absorbers on the frame to enhance the ergonomic characteristics. Wheel Hubs made in Novokramatorsk machine-building factory part of the machining process was performed by the company Diacom.

When creating new instruments were used modern adhesive technology from the company Henkel, which have been tested on the equipment department of dynamics and durability of machines and resistance of materials Mechanical Engineering Institute and showed significantly better results on welded joints.

With new race car team went to the competition Formula Student East, which took place in the city Gyor (Hungary) from 28 to 31 July. At the competition were presented 30 teams from 10 European countries, the largest number of teams were from Russia - 8. According to the results of the competition, our team has won 28 th place overall. With the support of "Progrestech-Ukraine" team gained trailer-carriage to transport the of the race car, so that they solved the problem of transporting a of the race car across Ukraine and abroad.

One of the main problems of the team during the two years was the lack of a complete engineering creativity lab, where students could create not only cars, but also other products. In summer Formula Student KPI received building area of 310 m2, which is equipped with everything necessary – from plumbing tools for turning and milling and welding equipment. At the basis of laboratory is planned to create educational platform of engineering work, which will be open to all undergraduate and graduate KPI.

Kyrylo Teplyakov, captain of the team, a graduate student of MMI