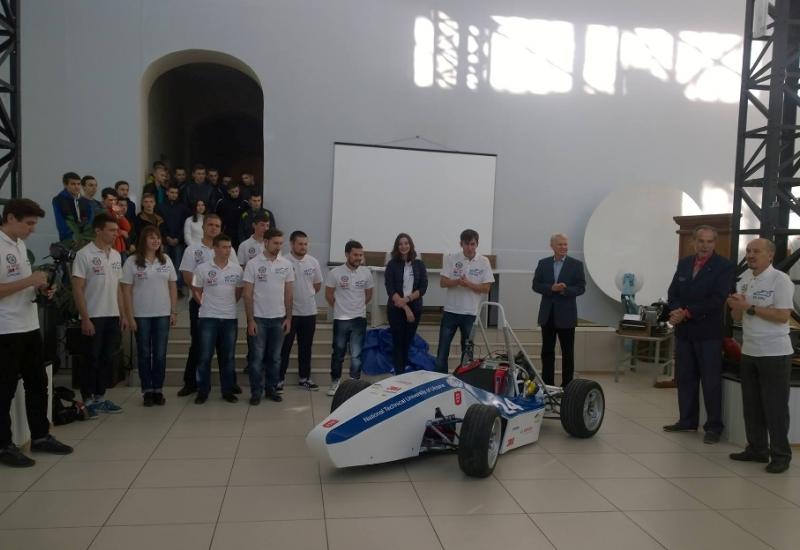 October 7, 2015 in NTUU "KPI" there was a presentation of the racing car class Formula SAE, which was designed and constructed by students NTUU "KPI" led by head of the integrated technology engineering department MMI Doctor of Technical Sciences Professor Vitalii Pasichnyk.

The creation bolide became possible due to grants won by Nescafe idea-X (www.ideax-nescafe.com.ua) and contest social projects of SUN InBev. In addition, materials and equipment necessary for the team helped the company Bosch, 3M, KDTU.

After a short welcoming speech pro-rector for educational work of Peter Kirichenko, which also significantly contributed to the team in the manufacture of bolide, for the audience was presented the car that is racing bolide with an engine capacity of 600 cc. The speed of 100 km / h bolide develops for 4 seconds. With this bolide the team was in September at one stage of competitions Formula SAE, that took place in the city Most, Czech Republic.

Formula SAE are the largest engineering competitions among technical universities in the world. They are held every year since 1981. Participants must themselves design, construct and then build a bolide. It is necessary to provide the whole package of documents for the project and prove that the adopted technical solutions are optimal. Also, it is necessary take into account the economic component of decisions.

2015 years, in a competition was attended by more than 500 universities of the world, including two from Ukraine. When present people inspected the bolide, he drove into the street Polytechnic, where demonstrated a ride in a straight line. Behind the wheel bolide was Stas Petin. Due to the limited size of the distance and standards of safety the speed not exceeded over 70 km / h, although the bolide can reach speeds of 130 km / h (higher speed is prohibited by rules Formula Student).

The team plans to continue improving the bolide and engage in the development of engineering creativity of students KPI. In the nearest future will set new members to the team. In plans for next year is creating the first open fablab engineering laboratory, organization educational platform for students and participate in international competitions Formula SAE.