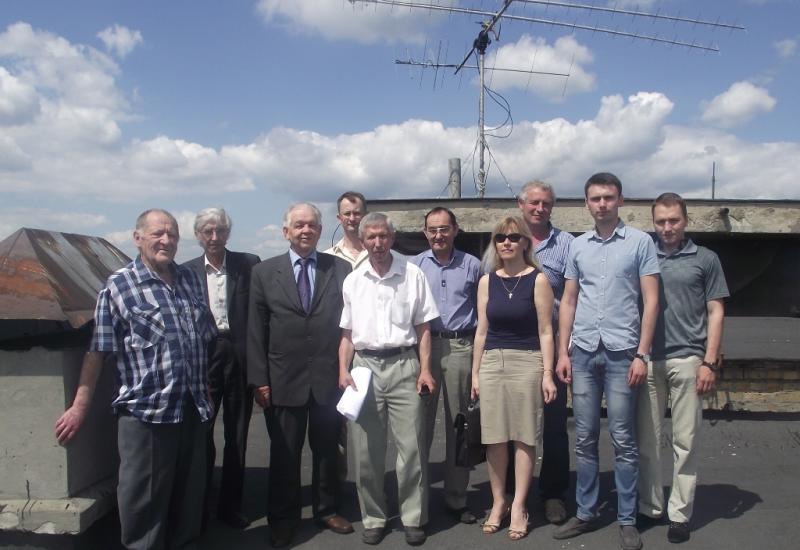 On June 19th one year passed since the first Ukrainian nanosatellite "PolyITAN-1" has been placed in orbit!
This spacecraft has a “Cubesat” format, weights 1 kg and has dimensions of 10x10x10 cm. It was created by a group of scientists, engineers and students of thermal engineering and radio engineering faculty, faculty of electronics as well as the Institute of telecommunication systems of NTUU "KPI" under the leadership of technical sciences candidate Boris Rassamakin. The mission control center with the necessary testing equipment was created at the university with the purpose of tracking spacecraft’s flight and conducting of planned researches.

The purposes of launching "PolyITAN-1" are: the optimization of technological modes; verification of energy developed at the University of Solar Power Sources; adaptation to the conditions of space and improvements for future missions digital channels of information transmission from the satellite to Earth and commands them; the study of the effects of outer space on the work of the satellite electronic subsystems and others.

After a year of "PolyITAN-1" launch nanosatellite developers and researchers who work in this project and on the development of the next device in the series "PolyITAN" gathered in the control centre. Actually, most of them meet each other every day because the first Ukrainian nanosatellite, unlike most spacecraft, which in the night from 19 to 20 June of the last year started along with him (the rocket "Dnepr” delivered in the space 33 satellites, developed by scientists in 17 countries of the world) is still in orbit, and its signals delivers valuable information about the work of its systems and subsystems. Therefore a lot of information was delivered during this year. Some of this information is taken into account in preparation for the launch of the next nanosatellite within the space program KPI. A part is already used to improve the control of the craft in orbit. In particular, some adjustments are made to the work of radio subsystems, software; placement, composition, operation of the antenna module and others.

"The surprise for us was the fact that in January of this year world-class experts put the "creation small “Cubesat” format satellites” on the ninth position in the list of ten most outstanding scientific and technological achievements of mankind which is annually published by the American magazine "Science". This is what “KPI” had been engaged in, - the pro-rector of scientific work university, academician of NAS of Ukraine Mikhail Ilchenko, who also participated in this meeting, said. It is also important that all these months there was a connection with the device and that the tasks that were set before "PolyITAN-1" (practical check of all satellites subsystems and its work in general) were successfully accomplished.
Therefore, it is logical to invite KPI to participate in the international project "Cube-50" that will be associated with the launch of the fifty nanosatellites. Development of one of these satellites is proposed to us. It will be included in the global information and research network that will explore the state of the thermosphere at altitudes of 350 km and lower."
Summarizing the activities of the project ""PolyITAN-1" during the last year, Boris Rassamakin told about the preparation of the flight; problems that had been solved by experienced specialists as well as undergraduate and graduate students; pressure of the first month of flight when adjustment of satellite subsystems were conducted; tasks that have been resolved and problems that are to be solved.

The undoubted success of the Kiev University of technology is high-efficiency solar panels that after a year of working in highly rigid space conditions have shoved significantly lower degradation than that of foreign analogues; a central processor; a telemetry system, the work of the external temperature sensors and others.

At 10:43 the conversation was interrupted, the satellite entered the visibility zone. The session has been started. The data received from the radio beacon and displayed on the computer screen were commented by Nazary Bendasuk. Today he is a second year post-graduate student, but started a project when he was a student. He was directly involved in the creation, configuration and operation of the ground control station. Continual information about the flight parameters, operation of the subsystems and the results of the experiments carried out by the researchers, continued until 10:49.
After the session, participants of the meeting examined 437 MHz antenna placed on the building #5 roof which provides connection with the satellite when it is at a distance of 2600 km from the management centre.

Communication among developers of "PolyITAN-1 has gradually turn in the format of a business meeting, because the start of “PolyITAN-2" is ahead. Taking into consideration that the second nanosatellite NTUU "KPI" have to solve a number of new tasks, the work on it is now very intensive. Because it will be used not only to obtain data for further development of the design, but also to obtain a very specific geophysical information that will be transmitted to the World data centre with the purpose of its further processing, preserving and providing access for scientists from different countries. While the experience gained in the process of preparing the launch of the first University nanosatellite and its flight is definitely useful for the preparation of the launch of not only "PolyITAN-2", but also other devices within the KPI space program.

On the photo: participants of the meeting near the antenna on the roof of building # 5.