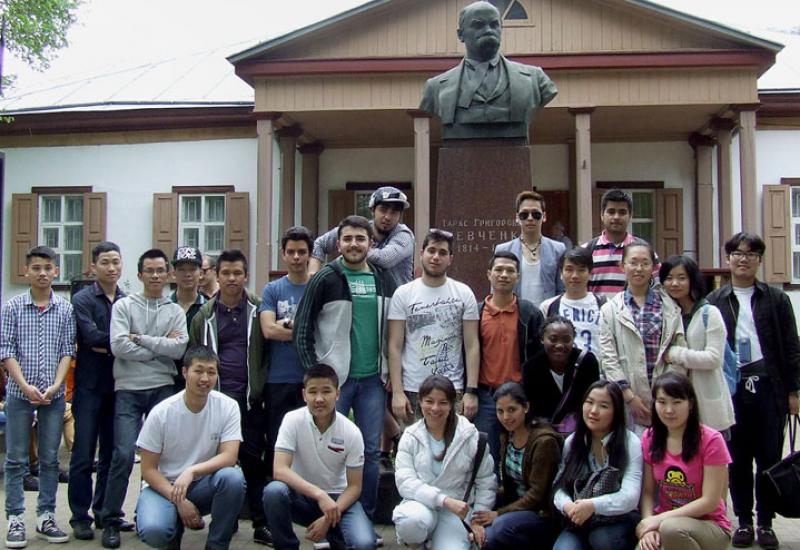 In 2014 Ukrainians of the whole world celebrate the 200th anniversary of the Great Poet birth. Preparatory office for foreigners listeners of the international education center  and foreign   students of NTUU “KPI”  joined to  this event: they became familiar with the poet bibliography, studied and recited his verses on the evening devoted to anniversary of the poet; watched movies about his life; laid on flowers to his  monument; visited T. Shevchenko's Literary and memorial house museum.

Unforgettable impressions with   foreign students and listeners of preparatory office remained from travel in places of the poet staying in Kyiv region. At the end of April they went a tourist route "Shevchenko in Kiyivshchina" which lies through Kiyiv, Boryspil, Baryshevk, Berezan, Yagotin and Pereyaslav-Khmelnytsky. In Boryspil T. Shevchenko was passing through. In   the poet’s honor staying in the city the memorable sign - one of the few monuments to little Taras is established.

From Boryspil went to Pereyaslav-Khmelnitsky. It  is rightly called the "city of museums" and architectural monuments. Students visited the National Historic and Ethnographic "Perejaslav" reserve, Museum of knowledge and space exploration,   the "Battle for the Dnipro” museum-diorama  near Pereyaslav-Khmelnitsky, the Shevchenko’s “Testament” museum  in  autumn 1943. Three times Taras Shevchenko stayed  in Pereyaslav at his  friend - the doctor Andriy Kozachkovsky. Here the poet created the unsurpassed poems "Caucasus" and "Biddy", and also world famous "Testament". Now in   this house is the   museum Shevchenko’s "Testament". Attendees were interested to look into the room where   the "Testament" immortal lines were born   - one of the brightest jewels of Poet creativity.  Tourists saw the original paintings dedicated Kozack’s period in the history of Ukraine, written by the poet; exhibits Kozack’s era. The living room has a piano and music which opened Shevchenko as a music lover and performer of Ukrainian songs. After the end of excursion students expressed desire to recite "Testament "  on the mother tongue. So, Tiako Chokonte Daniel from Cameroon declimed it in French. Therefore the preparatory department students and international students of "KPI" once again convinced of the genius Shevchenko, and the story of the poet expanded their knowledge of the Great Poet.

The students visited the Museum of National Architecture and Life of the Middle Dnipro, established in 1964. on 30 acres 185 sites located, including 104 monuments of  the seventeenth and nineteenth centuries folk architecture., Including 20 thousand works of folk art and tools , crafts items, collected in the forest-steppe zone of Ukraine.

During a tour of the National Historical and Ethnographic "Perejaslav" Reserve  Aviation and system department  students interested in a unique museum exhibit space exploration and cognition: an automatic layout device " Moon rover" the satellite device, a space suit and a parachute of the astronaut Yu. Gagarin, the devices used in spacecrafts etc.

Travelling   Ukraine combined youth from different countries, students expanded their knowledge of the Ukraine paths culture. Excursion made indelible impression on foreigners. Leaving home, they phoned to families and told about the seen. This day in thirteen countries of the world heard about picturesque, rich talented and ingenious people of Ukraine.