People and Universe by S. Voytsekhovsky 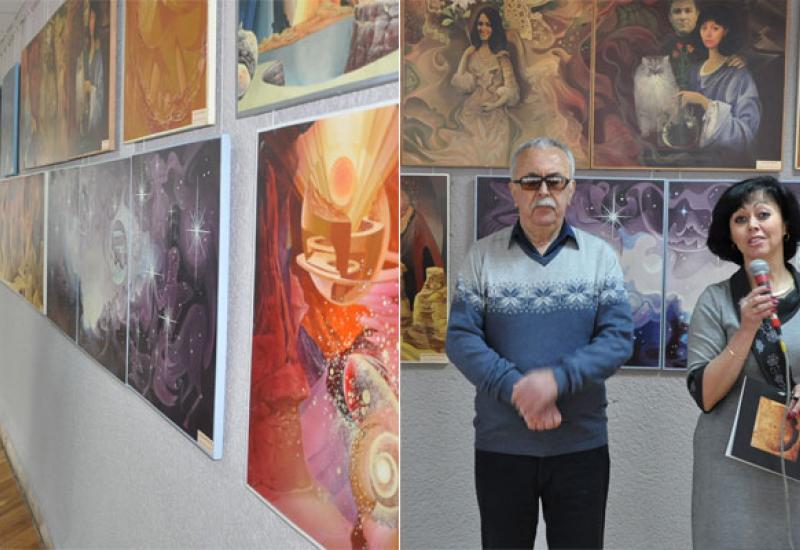 In the G. Synytsia Art Gallery of NTUU “KPI” the exhibition of the artist Stanislav Voytsekhovsky went off with great success.

It was peculiar works retrospection of well-known Ukrainian artist over the past decade. Generally speaking, his artistic legacy is great. He began his artistic career in early sixties and it will be impossible to show all his masterpieces using only one hall. Moreover, his artistic legacy includes not only easel paintings, but also great projects of interior design, in particular, buildings of National Aviation University (he devoted several years to this project), memorial to the Heroes of Lyutisky Bridgehead (together with V. Klymyk) in Novy Petryvtsy village. The church of Saint Jean the Baptist at the corner of Garmatna Street and Ivana Lepse Avenue in Kyiv, which is unique, is also his work.

Being the muralist, Stanislav Voytsekhovsky uses a lot of different techniques, such as indoor sculpture, chasing. But his favourite technique is marquetry. It is a mosaic, made of little pieces of veneer, which are stuck to the firm basis, and then they are grounded, polished and modified in color if necessary. With the help of this technique he creates man’s visual image of the world and universe.

Meaningful and extremely modern in forms, his works incite us to thoughts. Maybe it is one of the reasons why all his works are connected with Christian, historical and mythological themes.

S. Voytsekhovsky’s music also deserves our attention. It is worth mentioning that this great person received not only artistic but also music education. His compositions, especially half abstract, include difficult rhythms. It seems that they can create silent melodies in souls of the audience.

During all his life Stanislav Voytsekhovsky is not tired to learn something new, to look for new means, with the help of which he can bring into life all his plans. And the most important is that he always finds them. So now, at the age of 75, he has a lot of new works, among which there are pictures painted in technique he never used before. It is technique of acrylic painting and without doubt they are worth noticing. Among the latest Voytsekhovsky’s works we can see portraits of the members of his family, renowned artists of Ukrainian culture, religious-theme paintings and set of paintings called “Signs of the Zodiac” etc. There are also carved chess sets: “The Slavs”, “Spacemen”, “The Amazons” and “Monsters”. Every chess piece and chess table is a work of high art.

As well as the rest of works presented at the exhibition.