Awarding of the Winners of the Ukrainian contest «Samsung Developers' Academy» 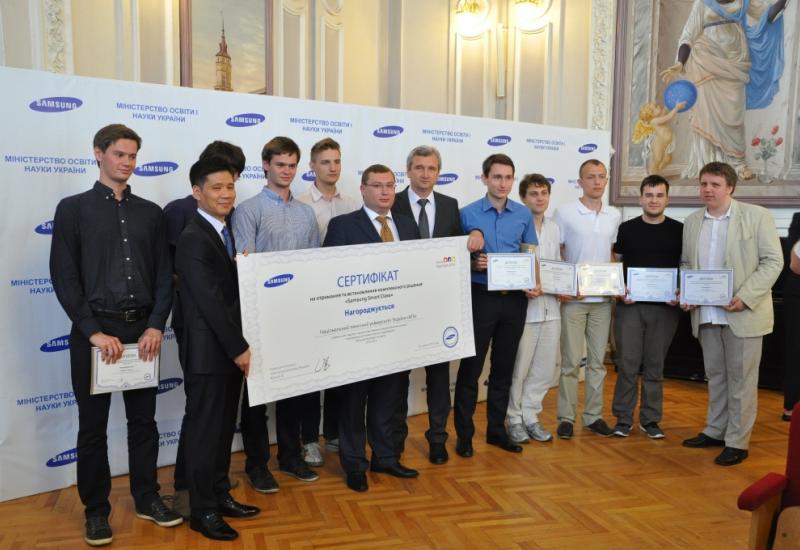 This ambitious project was launched in December 2013 and attracted great interest from the students of IT-specialties. The contest was held as part of a nationwide educational program «Samsung Developers' Academy» with support of the research and development (R & D) company «Samsung Electronics». The organizers aim to help talented Ukrainian youth to realize their knowledge, skills and aspirations. Therefore, the program is designed to attract the attention of the younger generation to the familiarization with technical specialities and help to update the technical base of Ukrainian universities. Company executives also make no secret that with this program they seek to replenish their ranks of promising young professionals.

The president of the Center research and development company «Samsung Electronics Ukraine" Kyong Chang Hung warmly congratulated contestants. He stressed that the success of any country is determined not only by its economic performance and foreign policy achievements, but also by achievements in the sphere of education and science. Today a significant role is played by information technologies. From the point of view «Samsung», education gives possibilities, so the company is helping to create new opportunities for Ukrainian students.

Top twenty participants were determined during the competition. Eight of them are students of NTUU "KPI", with five among the top ten winners.

"We think, that such initiatives and programs lead to rapprochement the quality of our higher education, in particular, technical, to the world standards - Deputy Minister of Education and Science of Ukraine Oleksiy Dneprov said at the ceremony. - And I am pleased to note that many students among the winners are from the Kiev Polytechnic Institute - one of the best technical universities in our country, and in my opinion, in Eastern Europe."

According to the rules the university that prepared the most number of the best young programmers is also awarded. Consequently KPI received equipment for arrangement «Samsung Smart Class». It includes a number of innovative products «Samsung», including interactive whiteboard, tablets and so on.

It is worth noting that two modern laboratories in the university were equipped already with a help of «Samsung Electronics». And, as reported in his speech director of the Center research and development company, Andrey Fisunenko, they performed 14 joint projects with a total budget of more than half a million dollars. Two of such laboratories exist in the Taras Shevchenko Kiev National University and this year there will be appiered in another four universities - the National Technical University "Kharkiv Polytechnic Institute", Kharkov National University of Radio Electronics, National Aerospace University and the National Aviation University.

"The new« Samsung Smart Class »will be equipped on the basis of the IPT, but also students from other faculties and related specialties, of course, will be able to work there and to solve certain problems," - Vice Rector of NTUU "KPI", director of the Institute of Physics and Technology Professor Alexei Novikov said, welcoming the winners.

After greetings from the rostrum the Deputy Minister of Education and Science of Ukraine Oleksiy Dnieper and president of the Center research and development company «Samsung Electronics Ukraine" Kyong Chang Hung presented the winners with certificates and prizes from the company - Tablets «Samsung Galaxy Note».