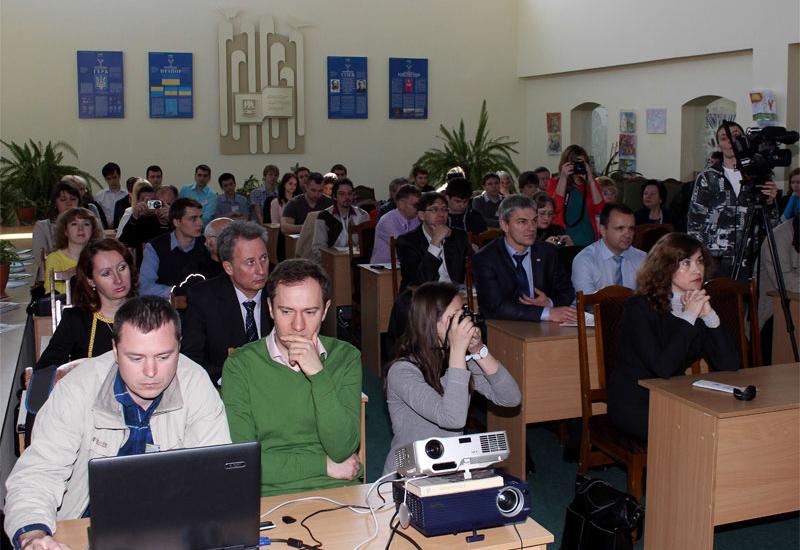 First International Research and Practice Seminar of Students, Scientists and Entrepreneurs „Smart city technologies in XXI century ” was held in Slavutych on 25th April, 2014. The initiators were «ICONICS» and «ПРОСОФТ-Україна», also a direct organisator was the Slavytich branch of National Technical University of Ukraine „Kyiv Polytechnic Institute”.

Students, master students, postgraduates, scientists, the officials of government and local government, research and design organizations, commercial firms and other companies which activities are concerned with seminar subject were invited to take part in the seminar.

The seminar was opened by the Mayor of Slavutych Volodymyr Petrovych Udovychenko, who pointed out the necessity and feasibility of such events for the youth of our city, and praised the activities of the branch Slavutych "KPI" in the sphere of advanced computer and information technologies not only in the educational process but also in terms of its students’ usage for the benefit of hometown.

The senior teacher of the branch Saveliev M.V. announced about the opening of "KPI" training centre on the base of the Slavutych branch for training specialists in the new generation sphere of 64-bit software applications in the field of APCS - package GENESIS64 ™ of U.S. corporation «ICONICS». The system GENESIS64 ™, which is implemented on the platform. NET and contains in its core technology support OPC and 3D-visualization, is a leader in its class. This software package is designed and certified for the latest 64-bit Microsoft Windows ® platforms and is fully compatible with the technology Silverlight ® and SharePoint ®. This project would have been impossible without close cooperation between Slavutych Branch "KPI",the corporation «ICONICS» and the company «ProSoft-Ukraine" which is a leading provider of hardware and software for industrial automation and embedded systems.

The seminar was attended by representatives of the main university, the vice-principal of scientific and educational work at "KPI" P. A. Kirichek and the rector assistant, CEO of "Science Park" Kyiv Polytechnic "" A. P.Shysholin, the head of the city department of education O. B.Lynkevych, the representatives of the Chernobyl nuclear power plant, SUE "PB" company "Atomremontservis"; the representatives of international companies and organizations - SP "Novarka", SIP-PMU, Galaktika Corporation; teachers, students and graduates of SF "KPI", faculty and graduate students CHNTU.

The laureate of the State Prize of the USSR and Ukraine, Doctor of Engineering, Professor Vitaly Litvinov delivered a speech about the problems of higher education in Ukraine in the context of globalization and the integration of Ukraine into the international division of labor, and also about the concepts of overcoming these problems. He also noted the high potential of Slavutych in the part of higher education and research development.

We also should mark the presentation of solutions in the sphere of automation tasks of maintenance and repair of complex infrastructural facilities and enterprises, made by "Galaxy" which is an undisputed market leader in Ukraine in this area. This report was particularly interesting and useful for professionals Chernobyl nuclear power plant and PMU in the context of the need to address similar problems on the Chernobyl site.

An interesting report "Electronic City - the practical implementation in Slavutych" was presented by Udovychenko Alexander, a deputy of Slavutych City Council,the chairman of the Standing Committee of Youth and Sports of the information technology issues, the head of "Infoklas". Not less interesting and important from the point of practical application view was a presention of Yevgeny Antonov, a business analyst «JBS», a teacher of the branch "How to Build" Electronic City ". From concept to implementation" . The report sparked a lively discussion that took place in the spirit of full scientific conferences. It should be noted the work of former students of the branch in this workshop.There are Buruk Svetlana, a graduate of the branch, who is currently studying for a 2nd course of MA Department of Electronics and Information Technology of Warsaw Polytechnic University ("features for modeling objects GOOGLE EARTH"), Vitaly Kirpel,a graduate of faculty BCI HPI, director of "Taurus Quadra "(" The implementation of projects aimed at improving life in the city "), Maxim Pantin, an engineer of SP" Novarka "(" Monitoring of computer and network hardware platform GENESIS64 ™ using protocol SNMP », Maksim Demidov, a graduate of FIVT" KPI "(" Modern information technology in Slavutych health care system. Forming a patient' outpatient medical card”).

The seminar was also actively involved with students of branch, not only graduate who have already had some personal achievements and developments in information technology, but also students of the first and second courses for whom this scientific workshop was the first in their lives.

Among the students' works we should mark a presentation based on diploma of Alexander Petrov "Design of Monitoring and Control of fire safety building Slavutych City Council on GENESIS64 ™" and mutual graduate students work of Yaroslav Kravchenko and Alexander Shcherbakov, "Automation System event management", its result was the development of web site for the annual Environmental Forum which is held in Slavutych. Participation in this event for students has become a good opportunity to practice in public speaking and preparing to protect their graduation projects.