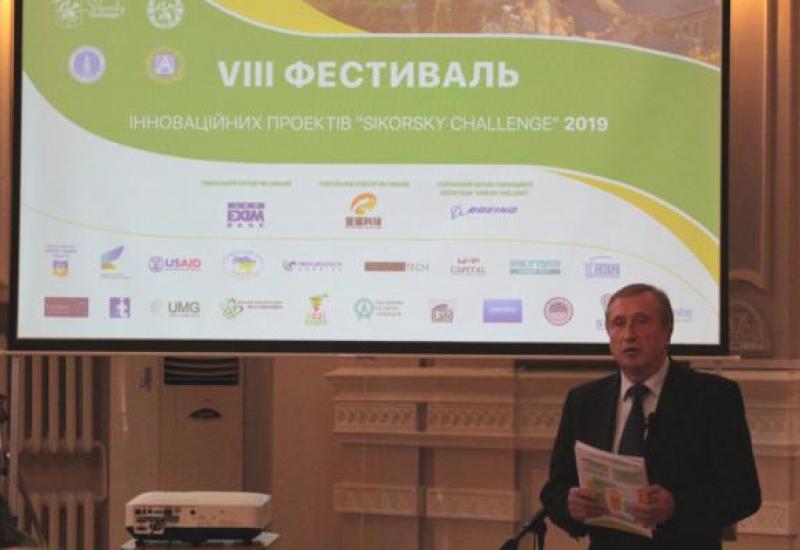 “The aim of this festival is to find talented inventors and help them become innovative entrepreneurs. However, experienced inventors and innovators from 10 countries of the world and practically from all regions of Ukraine take part in the festival, – said the rector of Igor Sikorsky Kyiv Polytechnic Institute, academician of the National Academy of Sciences of Ukraine Michael Zgurovsky in his welcoming speech at the opening ceremony of the festival. – I want to express special gratitude to the international expert jury led by Vic Korsun (USA) for the very hard work of selecting finalists among startups submitted to the first round of the festival. Now, over the next two days, review of these projects will take place, but the jury will evaluate the final projects with investors – 23 large investors from the USA, Israel, China, Hong Kong, European countries and, of course, from Ukraine will take part in the festival”.

The participants of the festival were also congratulated by the First Deputy Minister of Education and Science of Ukraine Yurii Poliukhovych, head of the international jury of start-ups competition Vic Korsun, president of the Boeing Ukraine company, the festival’s general partner, Oleksii Stopin, founder and president of Yau Lee Group (Hong Kong) Rozana Wong, Director General of Progresstech-Ukraine Andrii Fialkovskyi and others.

On the first day of the festival, as part of its program, the International Forum “Sikorsky Challenge” as a model of innovative development of Ukraine” was held. It was opened by a speech of the rector of Igor Sikorsky Kyiv Polytechnic Institute, academician of the National Academy of Sciences of Ukraine Michael Zgurovsky “Sikorsky Challenge as a center of crystallization of innovative development of the Ukrainian economy”. Deputy Minister of Digital Transformation of Ukraine Oleksandr Borniakov told the audience about new mechanisms to support the innovation movement and domestic startups, and Igor Peier (Israel), managing partner of the “Sikorsky Challenge” Innovation Holding, informed about new approaches and tools for launching innovation projects. The forum ended with a speech by the representative of the Chinese company “Golden Egg Technology” Bohdan Andriushchenko, “Joint Ukrainian-Chinese competition of startups: steps to support and bring scientific and technical to international markets.”

Participants of the festival’s opening also had the opportunity to get acquainted with the innovative projects of schoolchildren at the exhibition-presentation of the All-Ukrainian scientific and technical exhibition-competition of youth innovative projects “The Future of Ukraine”, which was arranged right in the Hall of the Academic Council of the university, where the festivities were held.

After the plenary meeting of the forum, two panel discussions took place as a part of it: “Development of innovative entrepreneurship at local, regional and national levels” and “Ukrainian and foreign investments and international grant support”. Representatives of universities participating in the “Sikorsky Challenge” Startup Schools network, Ukrainian investment companies and foundations, foreign investors from China, Israel, Poland, Hong Kong, Azerbaijan, the UK, representatives of international foundations and programs, and, of course, startuppers took part in them.

The startup competition, or rather its final, began in the afternoon. Now, the events of the festival, until determining and awarding the winners, will take place in the Hall of Innovative Entrepreneurship.

The festival presents a wide variety of projects – “Contactless charging of smartphones at a distance of two meters”, “Manhole + hatch + lock. Protect the manhole hatches and cables in them”, “Robotic arm for capturing non-operated spacecraft”, “Pneumatic firefighting systems”, “Production of details for medical purposes with a laser 3D printer”, “Radioprotective products for the correction of food rations”, “Acoustic vision” – a navigation system for the blind” and many others. Admission of projects for the All-Ukrainian startup competition “Sikorsky Challenge 2018” began at the end of April. According to Michael Zgurovsky, after a preselection of more than 170 inventions sent at the first round of the competition, 67 of them were selected for the final. These are projects in the fields of information and telecommunication technologies, alternative energy, the agricultural sector, the Internet of things etc. Creators and teams-creators who win will have the opportunity to implement their developments in the environment of the Science Park “Kyiv Polytechnic” with the help of grants and venture funds. Moreover, the main prize for the winners of the 2019 competition will be the participation of the authors of the five best of them in the Chinese startup competition in Hangzhou in November this year.

The winners will be announced on October 10 at the Center for Innovative Entrepreneurship of Igor Sikorsky Kyiv Polytechnic Institute at 16:30.

The “Sikorsky Challenge” Festival is one of the most important annual events in the field of innovation in Ukraine. It was first held in 2012 and immediately gained great popularity among students and entrepreneurs. The festival-competition of startup projects in the university was the first among a number of similar events that are being held now in Ukraine, and one of the most famous.

Among the traditional partners and investors of the Sikorsky Challenge festival are the Leonid Kuchma Presidential Fund, the Ukrainian Scientific and Technical Development Fund of V.S. Mykhalevych, Venture Fund “USP Capital”, Center of Anti-Crisis Initiatives, Progresstech Ukraine, Venture Fund of Kostiantyn Kalinin, Business Incubator “Eazi Start” and others. Representatives of companies will choose between projects participating in the competition the most interesting for themselves, and sign financial support agreements with their teams.

The full program of the festival and the list of finalist projects can be found on its website https://www.sikorskychallenge.com/fest/.

On the photo: participants of the festival are welcomed by the rector of Igor Sikorsky Kyiv Polytechnic Institute, academician of the National Academy of Sciences of Ukraine Michael Zgurovsky