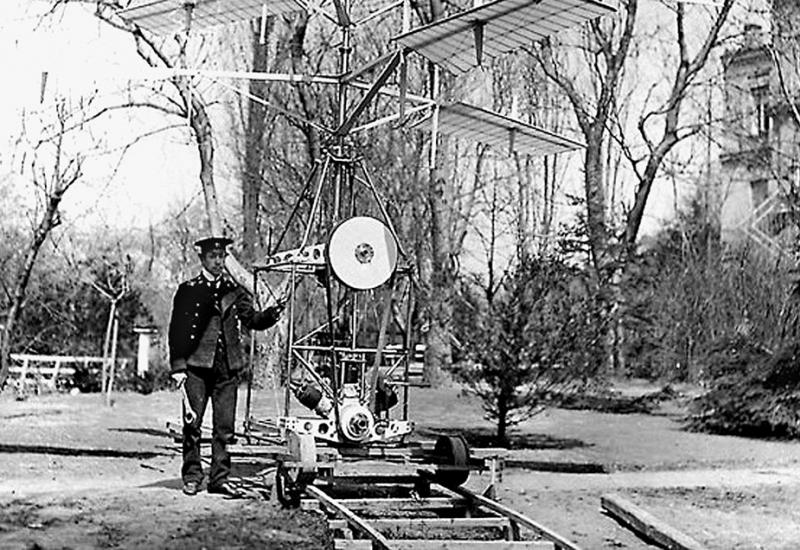 Our university carries the name of Igor Sikorsky- the aircraft designer, Ukrainian, well known in the world. Biographers investigated in detail historical facts about his American period of life. But some events in 1889-1918 have free interpretations. The manager of department of scientifically-educational work L.Perelygin investigated some unknown facts and debunked myths in a magazine "East European Science journal" about Ukrainian period of his life

She told the correspondent: "Igor went with a father to Germany in summer 1908, where became interested with demonstration flights of the American airman Y.Rait and decided to build safer vehicle for an airplane - helicopter. He chose a construction on a chart, with two spirally that was revolved in opposite directions".

Igor went to Paris in December 1908 for the purchase of engine and study of aviation business. In February 1909 he entered the aviation schools of F.Ferbera. He went back to Kyiv In May with the engine of "Anzany" by materials for future helicopter and began to build in the court of domestic house. In July the machine was ready. An engine worked to capacity, but rotorcraft did not rise, but only twirled. A construction required refinement.

Igor Sikorsky again visited Paris in autumn 1909 and brought two engines. Helicopter №2 was built in spring 1910. It was able to heave up only the own weight (180 kg) and became the first rotorcraft in Ukraine, that took off. In addition, these helicopters became the first in the world of helicopter aircraft vehicles. And they were built on Kyiv`s earth.

Igor met his first wife O.Synkevych in June 1914. Olga had only 15 years and she was his near relative- niece. Their marriage was not successful (A metrical book with the record about marriage is kept in funds the Central state historical archive of Kyiv, dated on the 6th November, 1915)

Igor Sikorsky worked as the manager of aviation department of the Russian-Baltic carriage factory and visited Kyiv not often. To make the life of wife with a baby – daughter Tatiana more comfortable he bought estate near Kyiv in 1916 near village Havrylivka.

A doctor М.Kovalevsky became the second O.Synkevych`s man, they had three daughters. Olga died in 1929 from tuberculosis in Luhansk. In 1924 Igor Sikorsky took the second marriage with Elisabeth Semion in New York, by Russian originally.

Igor Sikorsky`s estate was situated almost on 1000 tithe of earth. A large two-storey house adorned itself with white columns. At the back of the house there was an orchard, farther was a park. Children from both families arrived there to have a rest. Local peasants robbed and burned out an estate, in August 1918. Olga with child escaped through the forest.

The village Havrylivka now exists in Vyshhorodsy region, for 40 km from Kyiv. After remembrances of old-people, the last surname of owner was Sikorsky, but it may refer to Igor Sikorsky`s father.