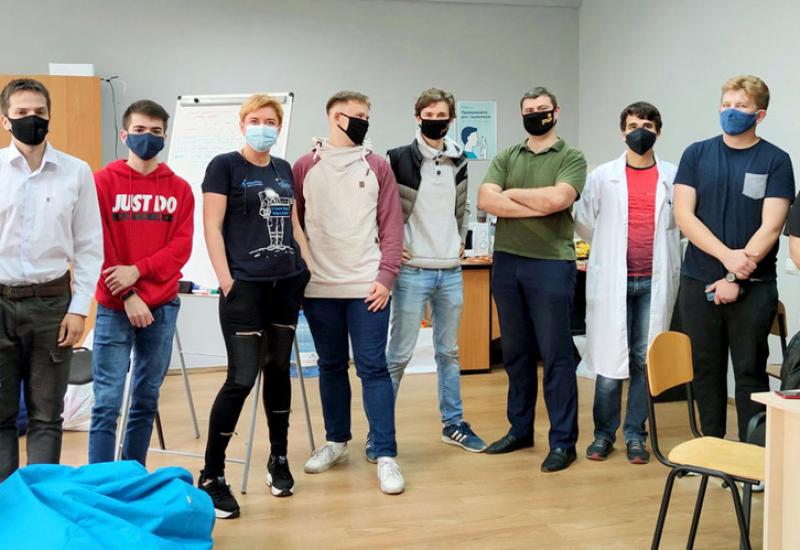 NASA Space Apps Challenge is the largest international space hackathon, organized with the support of the NASA (US National Aeronautics and Space Administration). Participants of more than 70 countries take part in the NASA hackathon. They form teams and solve practical problems within 48 hours, generating really interesting ideas.

On October 3-4, a 48-hour NASA hackathon took place in Dnipro. The “Noosphere Association” held it for the fourth time in this city. In light of the COVID-19 pandemic and quarantine restrictions, this year's hackathon was an all-virtual event. The Igor Sikorsky Polytechnic Institute students-participants can be found in the list of the best among other 16 teams.

According to the hackathon mentor, Senior Lecturer of the Department of Electronic Devices and Systems, Scientific Director of the Training and Research Center "Engineering School Noosphere KPI", Hanna Saryboha the winners presented the project "In-Space Assembly Platform" (ISAP) within the challenge Create, the task – Let's Connect. The students proposed to create a special space dock-module with which astronauts can create massive and pre-assembled component structures in-space. The jury highly commended the development and chose the team as one of the two winners of the local selection.
The teams: "DreamMakers" (chose the challenge Sustain, task – Sleep Shift Scheduling Tool), "Code'n'Klystrone" (challenge - Information, task - Automated Detection of Hazards) and "Cyclone" (challenge Create, task - Let's Connect) also represented our university.

The "DreamMakers" theme study was "Smart International Space Station", which is an analogue of "Smart house". The team developed a system of "smart" lighting using the technology of the Internet of things on the space station, studied and solved the problems of human sleep in space by changing the lighting spectrum. The team included students of the Faculty of Electronics, the Institute of Aerospace Technologies, a representative of the Medical University and a schoolgirl from the Department of Technical Sciences of Kyiv Junior Academy of Sciences of Ukraine.

The team "Code'n'Klystrone" became the third on the team ranking table. The team has developed a software package for rapid detection and notification of fires based on satellite data. The team included the students of the Faculty of Radio Engineering: Nikita Renhevych, Mykyta Krasnytskyi, Maksym Kot, Demid Strukov, Ivan Tomchuk, Oleksandr Myronchuk, Oleksandr Varvanskyi. The team mentor is Andriy Novosad, Senior Lecturer at the Department of Design and Production of Radio Electronic Equipment.
The “Cyclone” team proposed an efficient spacecraft docking system - the Hybrid Docking System, which was a combination of a mechanical and electromagnetic components; the team included the students of the Faculty of Electronics.

The hackathon organizers invited the two teams from Igor Sikorsky Polytechnic Institute - "DreamMakers" and "Code'n'Klystrone" to develop joint and new projects within the Training and Research Center of "Noosphere Engineering School KPI" and “Engineering School DNU”.