The Conference of the labor collective NTUU "KPI" 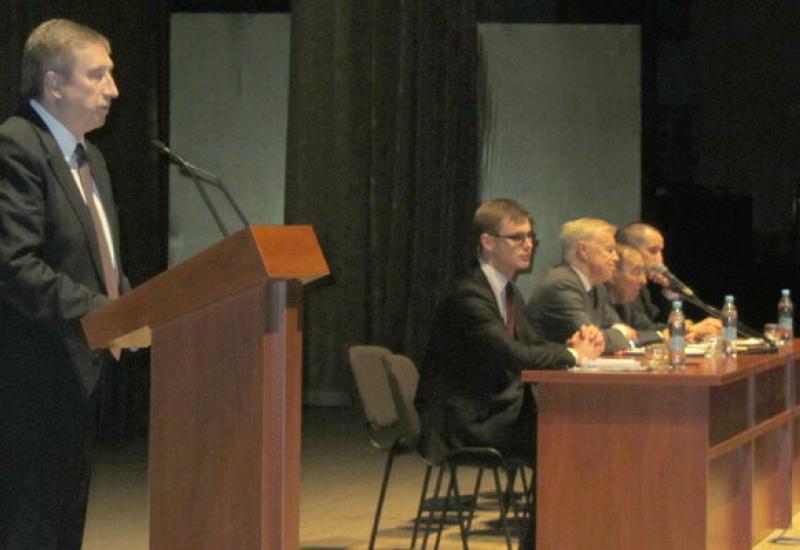 April 9, 2015  the Center for Culture and Arts University hosted the Conference of the labor collective NTUU "KPI", which reviewed the implementation of the Collective Agreement for the period from April 2014 to April 2015 and approved the collective agreement of the University for a new term.

In the report on the administration’s work rector M.Z.Zgurovsky told about all the components University’s activities during the reporting period - training activities, research and innovation, economic activity, cultural and mass work. 2014 proved to be very difficult for the university. Political instability, economic crisis, war in the east of the country negatively affected the position of the university. But in spite of all, the collective worked and carried out their responsibilities for the training of specialists for the national economy. At the end of his report, the rector said that the sections relating to improvement of the management system, social security, social insurance, medical care, spa treatment,  life working conditions of women, catering ensuring cultural needs of the collective agreement between the administration and the students fully implemented. Sections relating to health and safety and ensuring legal guarantees trade union and trade union activists were mostly carried out.

Chairman of the trade union committee of employees V.I.Molchanov spoke about the trade union’s work on the rights of employees of the university. Particular emphasis is placed on providing immediate and sustained response to the decision of the government and parliament, which significantly impair the rights and interests of teachers, including working pensioners. Protests, press conferences, appeals and negotiations – the last year was saturated with them for the entire trade union activists. In most areas the unions managed to defend the interests of workers, and the issue of pension "scissors" for working pensioners now is actively working and collecting signatures to cancel the accepted norms. Summing up speech, Chairman of the Union informed the delegates of the decision extended meeting of the Presidium of the proposal a positive evaluation of the Rector for the period and a collective agreement the University for the next period in the proposed working committee version.

Chairman of the trade union committee of students NTUU "KPI" A.Yu.Gavrushkevich reported on the activities of his organization to protect the interests of students and graduates of the University, in particular its active participation in solving the problems that students are turning to the trade union. He also made a number of proposals to improve sports and recreational and cultural activities. The Chairman of the Student Council D.V.Afanasev reported on a variety of events organized by the Student Council, aimed at the comprehensive development of students.

The delegates voted unanimously for a resolution approving the report of the rector and the chairman of the trade union, as well as an assessment Rector of the University for the period.

Further, the Conference considered and approved the sections of the Collective Agreement for the period from April 2015 to April 2016 with some editorial changes are proposed to the Working Committee.

The Conference decided to extend for one year the current mandate of the Commission on labor disputes and the University Council for housing and domestic issues.

Finally, delegates reviewed and approved the Code of Honor of the University, the main provisions of which were reported by the scientific secretary NTUU "KPI" AA Melnichenko, and the commission on ethics and academic integrity NTUU "KPI", approved by the Academic Council.