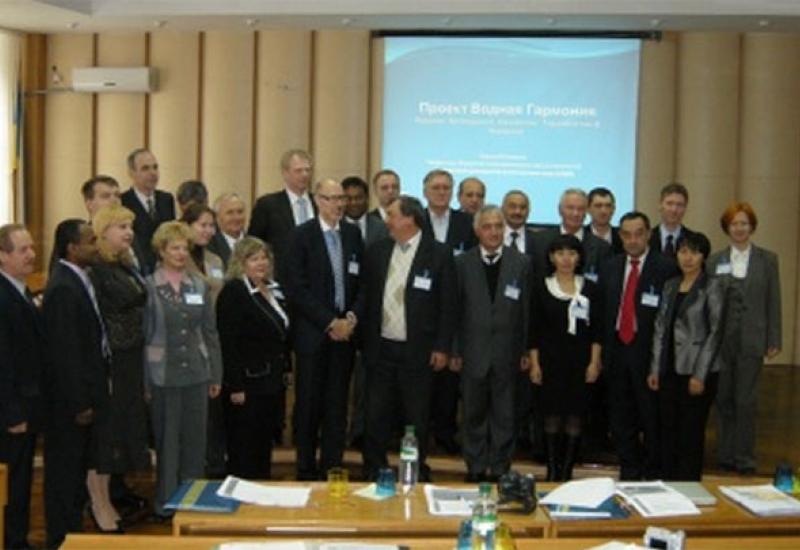 Eurasian training project "Water Harmony" started its activities in 2011 through collaboration between the Norwegian University of Life Sciences (NMBU) and NTUU"KPI". The project involves 6 more universities, which were invited by NTUU"KPI": Ukrainian State University of Chemical Technology (Dnepropetrovsk); Cherkassy State TU; National University of Water Resources and Environmental Management (Rivne); Belarusian State TU (Minsk); South Kazakhstan State University (Shymkent); Mining and Metallurgical Institute of Tajikistan (Hudzhand). Funding for the project included in the program of EURASIA, is provided by the Ministry of Foreign Affairs of Norway, through grants, and for 2011-2014 this is 5 million Norwegian Krones.

The main objective of the project is to improve the existing water protection technologies of states - members of the consortium on the basis of the experience of Norway using the scientific and educational base NMBU. Thus, in frame of the project a single methodological basis for training and qualification level "master" in the field of water supply, wastewater treatment and water resource management has been developed. For this purpose, the curricula of partner universities were harmonized, the improving of the quality assurance system, based on the recommendations of European Association for Quality Assurance in Higher Education (ENQA) is continued.

The project provides the training of students and masters of partner universities in Norway. Already two summer session were held (2012, 2013), where during two weeks the students received theoretical knowledge supported by practical and laboratory classes on the basis of NMBU. Students also get free access to the international database of scientific resources, to enhance the quality of scientific components of courseworks, as a result of the internship, students perform, as well as master's and post-graduate theses. Topics of student work reflect the current state of drinking water and wastewater treatment in Scandinavian countries, what the students learned during a tour of the water treatment plant in the city of Oslo and treatment facilities in western and northern Norway.

In accordance with the project, the work on writing a textbook that will reflect the latest scientific insights on water treatment and water conservation measures, physico-chemical basis of the methods of preparation and purification of water, is at the stage of completing. The first two sections of the textbook (all planned 6 chapters divided into 2 volumes) are ready, and contain information on the properties of water and the role of water in the biosphere, human activity; particular attention paid to the state and level of development of water technologies in the participating countries, taking into account geographical features, the location of industrial facilities, etc. There are plans to publish the textbook in official languages, and later - in English. NTUU"KPI" is the main coordinator and editor of the textbook.

Another point of the project - to provide the universities with laboratory equipment. For example, the Faculty of Chemical Technology has received a facility for studying the coagulation process of water impurities and ultrafiltration water purification. FCT also received equipment for the classroom - an interactive whiteboard, multimedia techniques, etc.

Educational, methodical and scientific issues with water protection problems and their solutions are discussed by the project participants at conferences and seminars. As part of the planning meetings of the working group, a meeting was held in May of this year, which began with a visit to the international exhibition in Munich (Germany) on the problems of water treatment technologies. During the exhibition the President of the European Water Association (EWA) met with the project participants. They discussed the importance and effectiveness of the project "Water Harmony"; noted that the educational and scientific goal of the project coincides with the principal activity of EWA to ensure Europe's population with quality drinking water. Further meetings were held at the Norwegian University of Life Sciences. Representatives of administration NMBU, ambassadors to Norway - from Ukraine Yu.V.Onischenko from Kazakhstan A.Tazhiev met with the members of the delegation. They under-stressed the importance and purpose of the project.

Further meetings were held in Oslo. The main issues discussed at the meeting with the participation of students, graduate and post-graduate students were the reports on the results of their research. Among those who now performs science work at NMBU, three representatives NTUU"KPI" - Masters A.Oliynik and V.Garkusha and the graduate student N.Sivchenko. Much attention has been paid to the state of readiness of the textbook, the possibility of introducing in the educational process of distance education system with water protection technologies.

Issues of further cooperation of partner universities in teaching methods and research activities on water protection issues were discussed also.