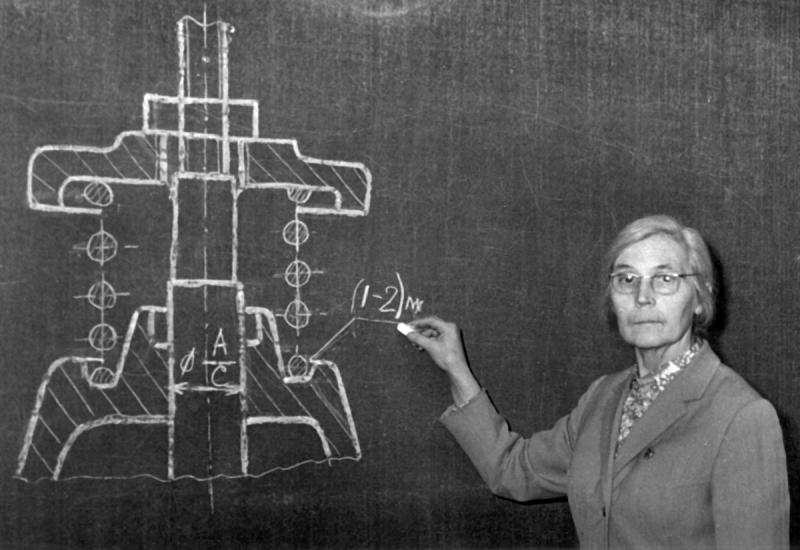 In the autumn of 2015 celebrated 100 years since the birth of Nadezhdy Konstantinovny Vitkup, former assistant professor of descriptive geometry, engineering and computer graphics, many years trade union leader of KPI.

Nadezhda was born in the city Samara in a large family of secondary school physics teacher. In 1934 entered into the  Moscow State University of the faculty of mathematics. Her teachers were known mathematics A.M.Kolmohorov, P.S.Aleksandrov, M.S.Piskunov.

After graduation, Nadezhda worked at the Central Institute of aerodynamic, which united the best at that time, scientists in the laboratory, created A.M.Tupolyevym. She performed calculations of aerodynamics aircraft. Continued to work at the institute during the war, for which he was awarded a medal.

After the war, the family moved to Kyiv N.K.Vitkup. Nadezhda entered in graduate school at the Department of Engineering Graphics Kiev Civil Engineering Institute. In 1953 he defends her candidate dissertation entitled "Method of converting figures in descriptive geometry." One of the reviewers describing its scientific work, wrote: "In the thesis the new geometries for descriptive method that can be successfully used in solving problems of position. The method of image spatial forms on the plane is important as a basis for building engineering drawings and study space forms of flat images. "

Since 1951 Nadezhda worked as a senior lecturer at the Institute filmengineers, and since 1954, after its merger with the KPI, the department of descriptive geometry and engineering graphics KPI first teacher, and later associate professor. As good specialist Nadezhda attracted to teaching at the faculty for teachers of universities, where it transferred its experience teaching graphic disciplines. Nadezhda work of teaching combined with research. She led the research seminar chair.

In the KPI  Nadezhda is also known for her social activities. Nearly twenty years of staff of the institute elected a member of the local committee. She headed the trade union committee of social insurance. With the hard work Nadezhda was awarded the medal "For active in trade unions."