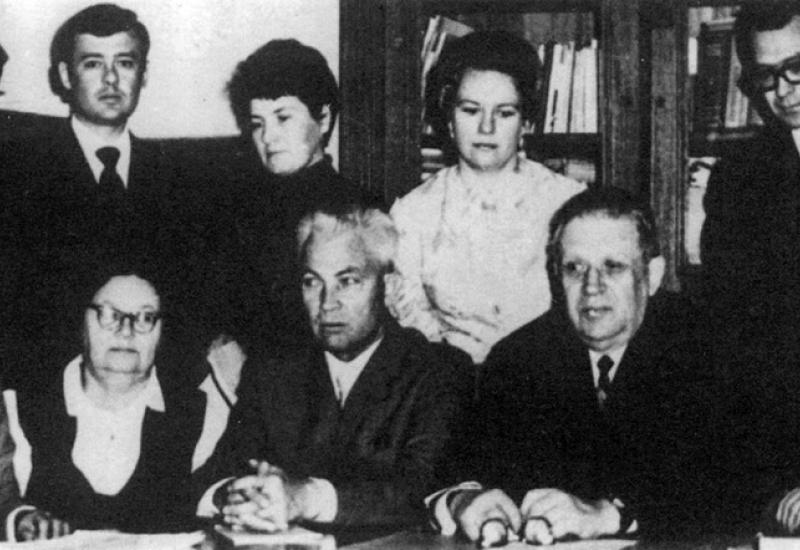 The history of Kyiv Polytechnic Institute has 120 years full of events of exciting life. But the main in this life is to preserve and to increase the traditions of the previous generation of polytechnicians. We mustn’t forget the heritage from our great predecessors whose experience may be useful in future.

A lot of students and teachers of Kyiv Polytechnic Institute laid down their lives on the altar of victory during the Great Patriotic War. The pedestal of eternal glory in the University Park keeps their memory. Not only the best Institute personnel but also their scientific works are gone.

Kyiv Polytechnic Institute’s revival during the post-war years was connected with dedication and hard work of the Institute staff. In the vanguard there were the frontiersmen, who came back to destroyed alma-mater after the war. Among them Alla Bondar, Vasyl Vynoslavsky, Vasyl Hnatovsky, Anthon Ornatsky, Ivan Chizhenko and many-many others.

Post-war Kyiv Polytechnic Institute is indebted to its rector Oleksandr Plygunov for speedy recovery, reintegration into the atmosphere of high academic culture and pedagogical excellence. He made a great contribution to the Institute’s development in hard after-war years. He had been leading Kyiv Polytechnic Institute for 25 years (1943–1952 1955–1971) and the Department of Inorganic Substances Technology – for 30 years.

Since September 1941 Plygunov had been working as Associate Professor of Central Asian Industrial Institute in Tashkent. Kyiv Industrial Institute (Kyiv Polytechnic Institute was called in such way) was included to it after evacuation from Kyiv. Plygunov was a Dean of Chemical and Technological Faculty, Acting Deputy Executive Director and temporarily acted as the Director of the Institute there, in 1943 led the Department of Inorganic Substances. Upon liberation of Kyiv of German-fascist invaders in December 1943 an outstanding scientist in the field of Chemical Technology Oleksandr Plygunov was appointed director of Kyiv Industrial Institute. In January 1944 he led the works of reconstruction the destroyed Institute’s premises.

Until the return of the main body from Tashkent in the Institute 3 faculties were formed: of Mechanics, of Chemical Technology (each of them had 4 departments), of Electrotechnics (had 1 department). Five departments of whole Institute were founded at the educational part.

At the suggestion of director O. Plyugunov and public organizations in July 1944 the institute was returned its historical name - Kiev Polytechnic Institute.

Arrangement of teachers had been prioritized by O. Plygunov throughout all the years of his rector’s work. At that time in institute such outstanding scientists worked: the academicians K. Khrenov, M. Dobrokhotov, V. Sveshnikov, F Belyankin, B. Lysin, V. Shaposhnikov; the corresponding members of the Academy of Sciences of USSR V. Vasiliev, V. Izbeckov, S. Tetelbaum, A. Kovalenko; the professors I. Shvets, V. Tolubinsky, A. Nesterenko, K. Vashchenko, S. Rudnyk, G. Pysarenko, A. Orlovsky, O. Smorgozhevsky, M. Kilchevsky, M. Kondak, V. Kuzmin, O. Kudra, M. Nekrasov, V. Grydnev, I. Postnykov, V. Yavoysky and others. It is significant that most of them were the graduators of the Institute. They were the heads of the departments, conducted scientific-pedagogical work.

The expanding of postgraduate contributed to improvint the training of the scientific-pedagogical staff. In 1945-1946 13 aspirants, teachers and workers defended their Candidates Thesis. Among them – a legendary Borys Pathon, who defended his Candidate Thesis on problems of welding process in 1945. O. Plygunov paid special attention the talented youth and their pedagogical and scientific activity. From the first post-war proms such students were left at the departments and in the postgraduate: V. Taranenko, K. Samofalov, M. Ilchenko, Y. Trokhymenko, O. Trubenyuk, I. Trush, O. Bookrynska, V. Vynoslavsky, O. Kolchenko, V. Kostiuk, O. Pyrsky, G. Serdyuk, V. Khilchevsky, V. Khrystych and others. Later they became professors, Heads of the Chairs, Deans, Vice Rectors of Kyiv Polytechnic Institute.

The research work and the involvement of the students in it were of great importance for the quality of specialists’ training. In the first post-war years this work was mainly focused on solving of the tasks of national economy’s restoration. The polytechnicians of Kyiv worked on solving of such problems: the improvement of technological processes in Mechanical Engineering (Professor S. Rudnik), th improvement of technical level of electric appliances’ building (Professor A. Nesterenko), electric control of the metal-cutting machine tools (Professor M. Vasiliev), automatization issues ( Professor Y .Greben), scientific substantiation of the development of the local electro stations of the Ukrainian SSR (Professor A. Orlovsky), the electricity’s transmission without wires (Professor S. Tetelbaum), the improvement of radio receiving equipment with the aim of reducing radio interference (Professor .P. Vollerner), the improvement of qualitative indicators of heat engineering equipment (Professors M. Kondak and M. Kichigin), thermal processes in jet engines (Professor I. Shvets), the study of local ceramic commodities and the use of it as the building materials (Professor B. Lysin), the improvement of the  technology of electro technical production (Professor M. Voronin),the  increase of the efficiency of burning equipment of industrial enterprises (Professor M. Dobrokhotov) and others. The technical help to the enterprises and organizations in the form of consultations, surveys, expert assessments, analyzes, development of methods for solving important scientific tasks put forward by the industry, were systemic. 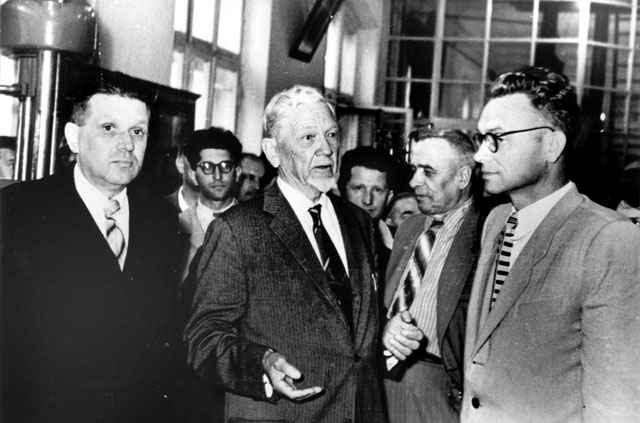 The students, especially of the senior courses, were involved in the scientific-and-technic creativity at the general-education and special departments. The main forms of their participation in the research works in the post-war years were scientific circles, on the basis of which a student scientific-and-technical society was formed at the institute in April 1946. At the moment of its creation it included nine sections, which combined 30 groups according to the specialities and about 500 students. The leading scientists of the institute controlled the sections.

The work of popularization of the achievements of the national science and technology was carried out: the course of the history of technics was introduced. The Associate Professor A. Golian-Nikolsky took charge of it. The department was performing considerable work on preparation to publishing the works dedicated to the national scientists and their contribution to the world science.

In 1948 the team of Kyiv Polytechnicians celebrated its fiftieth anniversary. The scientific achievements and the Institute were awarded with the highest civilian prize – Lenin’s Medal for the great contribution to the training of the highly qualified specialists. More than 50 Kyiv Polytechnic Institute workers received high awards. Among them the Director of the Institute, Professor O. Plygunov, the Professors V. Vasiliev, K. Vaschenko, S. Rudnik and others.

In 1950 the more than 500 engineers graduated from the Institute. And for the post-war five years the institute has trained almost 2000 specialists for the national economy.

In 1949-1951 the reconstruction of the institute premises was completely finished. The laboratories of machine details, of agglomeration, of Physics of metals, of X-ray, of electromagnetic field, of physicochemical composition of dielectric were equipped. The special laboratories at the department of the central power stations, the cabinet of the organization of production and technical safety and others were reconstructed too. 104 laboratories, 29 cabinets; 3 workshops which served for 56 departments of 10 faculties, functioned in the Institute. The number of the students significantly exceeded the pre-war level - more than 4500 people studied at the institute. A significant increase of the number of the students led to the   expansion of the institute’s training and production facilities. In 1951 1200 m2 of new educational space were commissioned. The boiler room of the Chemical building, control gas distribution station, gas substation of low pressure became operational. The works on the equipment of the fume vent and the replacement of central steam heating with a water one began. The construction of the Building of Radio technical Faculty, of the dormitory №1 and new student’s dormitory for 550 people, of housing units for the personnel and others began.

A.Plygunov has been a Director until September 1952. For a while he focused on the scientific work. But in December 1955 he was reappointed as Director Kyiv Polytechnic Institute as he had reach experience in the field of higher technic education.

In 1954 – 1955 the reconstruction works at all facilities of the Institute were finished. Educational process and especially scientific-research work demanded new laboratories and cabinets. The laboratory of isotopes and KINOLAB of theoretical frameworks of electrical engineering, measuring technics, counting machines and others. In 1958-1959 the laboratory base of the Institute was expanded, two research laboratories were founded at the Faculty of Chemical Engineering, one at the Mining Faculty, and four at the Faculty of Mechanical Engineering.

Kyiv Polytechnic Institute was expanding quickly. New faculties, departments, specialties were opened, the teaching staff and the number of students were significantly increased. 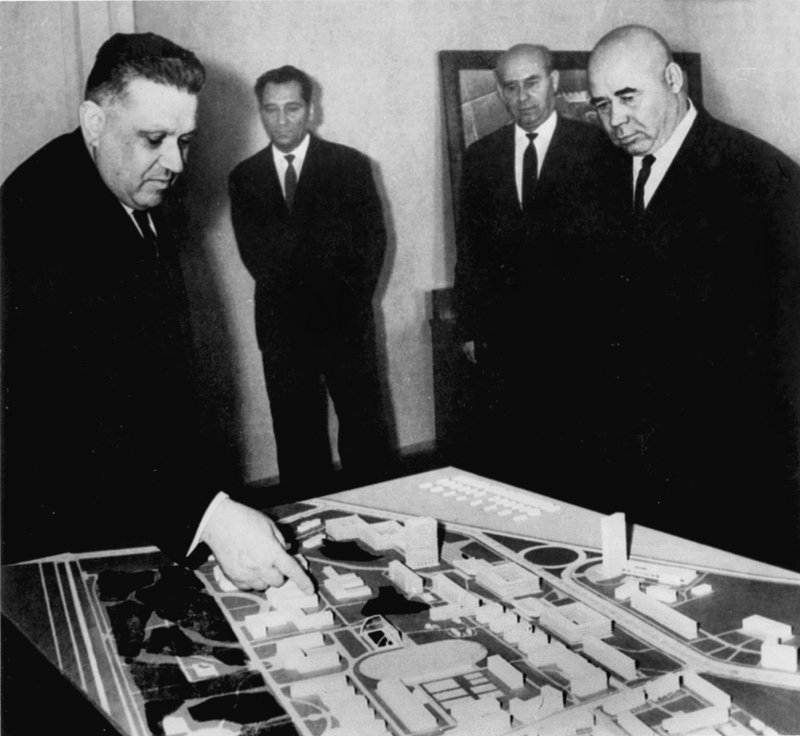 The teaching staff expanded with famous scientists in those years. Among them professors I. Fedorchenko (Metallurgy and Powder Metallurgy), G. Samsonov (Metallurgy), I. Plotnikov (Electrical machines), S. Svechnikov (Physics) and others. Among graduators of the postgraduate studies of the early 50's were Y. Lukach, O. Alabovsky, V. Gnatovsky, V. Vinoslavsky, M.V.Novikov, V.O. Khristich. The teaching staff had almost doubled. Almost half of the departments were headed by the lecturers with degrees of doctors and candidates of sciences.

Professor O. Plygunov was literally an outstanding organizer of higher technical education in Ukraine and the former USSR in the XX century. Kyiv Polytechnic Institute has become one of the biggest higher technical institutions in Soviet Union, world-famous educational-scientific center of advanced technical intelligentsia for a quarter of century of his rector’s work. A brilliant corps of prominent figures – scientists, creators of new technologies, artists, athletes statesmen – graduated from Kyiv Polytechnic Institute in those days. Among them the academicians of the Academy of Sciences of Ukrainian SSR: V. Trefilov (vice-president of the Academy of Sciences of Ukrainian SSR), I. Pokhodnia, M. Novikov, V. Nemoshkalenko, O. Gorodysky, V. Troshchenko; the Corresponding Members of the Academy of Sciences of USSR: K. Samofalov, O. Dolynsky, A. Lebedev, O. Polyankevych; the composer Mykola Dremlyuga, a national artist of USSR and long-term artistic director of the National Opera Anatoliy Mokrenko, Olympic champions Larisa Latynina and Yuriy Titov, an outstanding footballer and coach Valery Lobanovsky, Mayor of Kiev (1979-1990) V. Zgursky, the leader the Ukrainian government of the time of the USSR and independent Ukraine Vitaliy Masol, the Minister of Culture of the Ukrainian SSR Y. Yelchenko and many other gifted people. By the decision of the Academic Council, the series ‘Biobibliography of Kyiv Polytechnics scientists’ dedicated to the 120th Birthday of  Igor Sikorsky Kyiv Polytechnic Institute were founded. Boibibliographic guides would show the main stages of life, scientific, institutional, pedagogical and social activities of the scientists. The second issue of these series was dedicated to the Rector of Kyiv Polytechnic Institute, the professor Oleksandr Plygunov.