Meeting with the Deputy Head of The Office of the President of Ukraine: special attention - to the development of defense 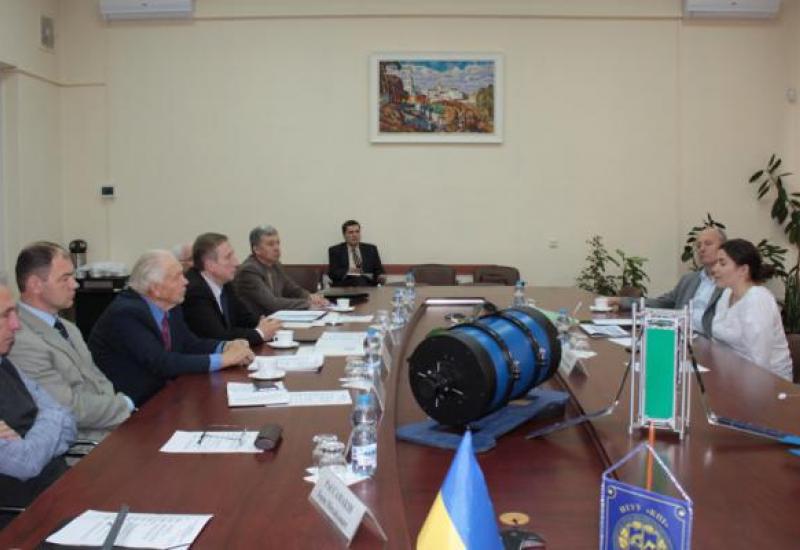 On the 26th of September, Deputy Head of The Office of the President of Ukraine Anna Kovalenko and Head of the Main Department on Security and Defense Policy of the Ukraine Presidents Office Serhiy Tykhonov attended the Igor Sikorsky Kyiv Polytechnic Institute

There were a lot of people who took part in the meeting. They were Rector of the university  academician of the National Ukrainian Academy of Sciences Michael Zgurovsky and the Head of the University’s Academic Council, Director of The Institute of Telecommunication Systems,  academician of the National Ukrainian Academy of Sciences, Mykhailo Ilchenko, the Vice-rector for International Relations Serhiy Sydorenko, Corresponding member of National Academy of Sciences of Ukraine Vice-Rector for International Relations and Deputy Vice-Rector of the Science work Yuriy Sydorenko, Director of the Institute of Aerospace Technologies of Igor Sikorsky Kyiv Polytechnic Institute Ivan Korobko, Chief Engineer of the Special Design Bureau "STORM" Serhiy Pukha, the head of the laboratory of nanosatellite technologies of the Heat and Power Faculty Boris Rassamakin and others.

At the beginning of the meeting, the guests were informed about innovative projects of the experts of defense and dual-use technologies University. As Michael Zgurovskiy has said, today Kyiv polytechnicians are working on more than 40 developments related to this topic.

Five of them are already commercially produced by domestic enterprises. Further negotiations concerning the implementation of the Igor Sikorsky Kyiv Polytechnic Institute projects related to the defense field extended beyond the University. Its participants discussed some general problems of Military–industrial complex management, which retard the implementation of domestic engineers’ modern developments into production and armament settings. In particular, the speed of project advancement, from concept to product,  significantly slows down by some bureaucratic procedures, which require changes, as well as the budget financing conditions of necessary for our country researches.

Also there was discussed the Igor Sikorsky Kyiv Polytechnic Institute experience of Nanosatellite launching into the orbit on an investment basis which involved the Foundation for Scientific and Technological Development named after Academician V. Mykhalevych, Venture Fund of Kostiantyn Kalinin, “Boeing” corporation and others, and also for account of the Igor Sikorsky Kyiv Polytechnic Institute participation in joint international research programs.

Deputy Vice-rector on the Science work Yuriy Sydorenko presented to the Igor Sikorsky Kyiv Polytechnic Institute a space program. In particular, he thoroughly described design features and mission of the PolyITAN-1, PolyITAN-2-SAU nanosatellites which were launched into space in 2014 and 2017. Also he described PolyITAN-3, PolyITAN-4 and PolyITAN-5 nanosatellites on which university’s scientists and students are working.

But guests found the most interesting a project of creation of the first domestic satellite constellation for the Earth remote sensing with high distinct ability. Such systems exist in only three countries today - in the US, China and Israel. It must include six microsatellites, which are equipped with optical scanners developed in the Igor Sikorsky Kyiv Polytechnic Institute (by the way, during the meeting guests were able to see the prototype of such scanner - in the auditorium where the meeting was held it was standing on the table along with engineering models of nanosatellites.) More than 30% of the technical solutions, which have been already tested using university’s nanosatellites, will be used in microsatellites along with new composite materials, which were developed in the Igor Sikorsky Kyiv Polytechnic Institute and which will significantly reduce microsatellites mass, therefore reduce the cost of its launch.  By the way, according to prior evaluations, the total cost of the system should be much less than in similar satellite constellations established abroad.

It is also planned, that the university’s microsatellite constellations will be completely manufactured on the domestic industrial basis, in particular on the basis of the Igor Sikorsky Kyiv Polytechnic Institute and a group of high-tech enterprises, which are members of the the Innovative and manufacturing platform ‘Kyiv Politekhnika Union’

Another Igor Sikorsky Kyiv Polytechnic Institute development, which attracted the attention of representatives of the Office of the President of Ukraine, became a security system and equipment for monitoring maritime entitlements, as well as land and air space. That  equipment was developed by specialists of Special Design Bureau "STORM" and the Chief Engineer of the Bureau Serhiy Pukha told about it.

Such systems are established to detect unsanctioned ingress to protected objects and to prevent illegal border crossings. As Anna Kovalenko noted, that it  is extremely necessary for Ukraine, so she will facilitate the promotion of the necessary communications with the agencies interested in that, especially with the Ministry of Defence (Ukraine).

As a result of the negotiations, implementation plans of a number of defence developments were agreed upon with the assistance of the Office of the President of Ukraine.