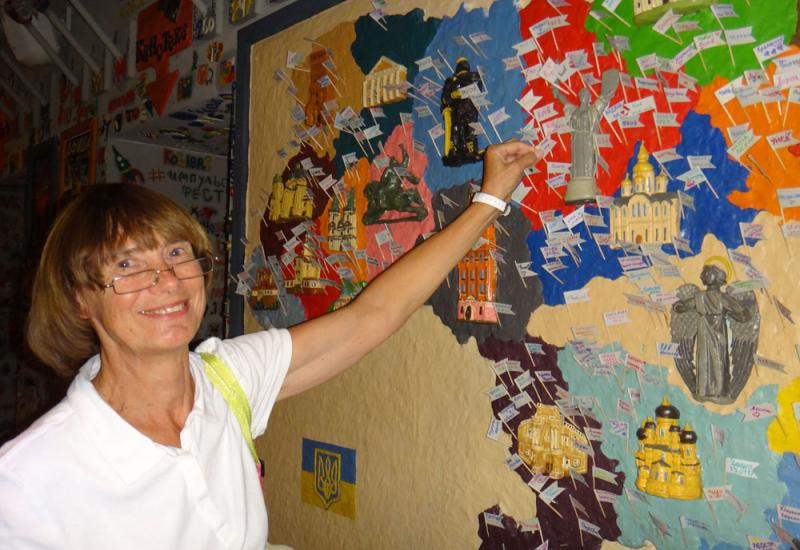 Tourists are always looking for interesting things in new cities. Art cafe "Plasticine crow" in Harkiv tend to be so. The place is very atmospheric, in the style of the eponymous cartoon. Visitors, besides really delicious dishes,are offered plasticine, and everyone can place their creature on the wall / ceiling. And then come to visit it (joke). The establishment has been working for more than 2 years; as a result, it’s hard to find non-molded place.

The most usual doors on the central street. We open the door, the stairs conduct us down. There are old skis, Soviet baby carriage and bicycle along the walls. Below, there is the door with a window. We knock down. The janitor from the cartoon “Plasticine crow” looks out, asking a password. We were prompted on the eve:” А u vas syogodni lipytsya chy ne lipytsya?" We are skipped.

The first room is a hallway or a janitorium. The atmosphere of the Soviet Union is restored. Here is a plush rug, a small TV "Youth" (remember?), skates and more.

There is a plasticine map in the hall on a wall on the right. Guests tick with flags their regions. Above the map there are figures,which indicate the number of visitors from those or other places and additional fasteners for flags that do not fit on the map. We left a tag with the inscription "KPI" in the center of the card too (on the photo). On the left there is a dressing-room in the style of the "Berizka" store and a bunch of souvenirs with playful inscriptions that are actively sold out.

The cafe has five rooms, rich in interesting details and decorations, which add a special charm. For example, fixtures made-up from glasses and bottles.In the afternoon the Soviet cartoons are broadcasted at the wide screens, and in the evening films of 70-80s are broadcasted. On the walls there are shelves for products made of plasticine and stairs to adorn the results of their plastic artwork, even on the ceiling.

The next hall is a playroom. There are chess,checkers, loto on the tables.Play as much as you want. The 3rd hall is a concert hall. Usually, the hits of 70-80s are played. Clips and fragments of films, which were popular in this time, are broadcasted on the big screen. The walls are decorated with a multitude of plasticine paintings, real masterpieces! Under the ceiling is a plastic globe globally, with foreigners flagging their country with flags.

The fourth hall is called "Raven's Nest", where “nest” chairs are suspended to the ceiling, in which it is possible to fit comfortably. Whatever you promise your child you won’t be able to lure him. On the opposite wall is a bookcase. It is with a secret.
If you push it a little, you will get into the room of huckster. There are scarce and forbidden things of that time, for example, the Playboy’s cover on the wall.

The food in the café is very delicious. Hotplates are served on thick ceramic plates, which keep warm for a long time. The menu includes Carpathian dishes. Prices are indicated in dollars, at the rate of 80s - everything should be multiplied by 0.6. If you visit this café for the first time, you will be arranged an excursion. About toilets. There are four of them in different styles: car, music, cinema and sewing( have you ever been in toilets with dummy? and with cinematograph?)

On the way out the janitor says goodbye with jokes and humorous catchphrases, he also wishes good luck and gives you paper balls with seeds ‘for a path’. Just believe, the lips themselves stretch in a smile, and the mood is noticeably improved when you remember this place.