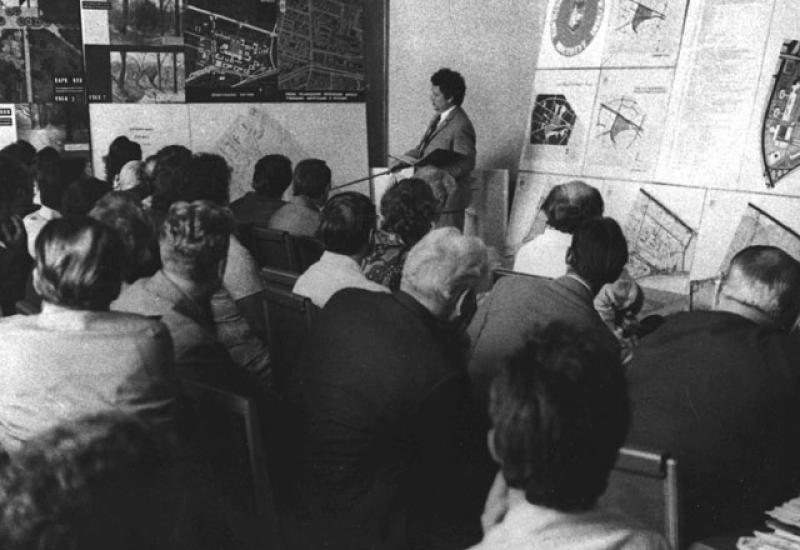 The jubilee chief architect NTUU "KPI" coincided with the full bloom of his creative powers, boundless energy, the epitome of good ideas in the works to further improve our university.

V.I.Lihovodov is the heir to a noble family Pokhitonov, which was eminent, illustrious, including works by famous Peredvizhnik middle of the XIX century Ivan Pohitonov whose miniature paintings adorn the best Ukrainian and international museums. Among the ancestors V.I.Lihovodov there are pianist-accompanist Chaliapina, the intendant of the Mariinsky Theatre in St. Petersburg, diplomats, military leaders.

The hero of the day was born in the city Makiyivka, Donetsk region, where his father headed the mine. The childhood of the future architect passed in this city. In 1942, during the German occupation, twelve years old, he was wounded by police in helping Soviet prisoners of war. After the family moved to Mariupol V.I.Lihovodov, experiencing hardship and hunger, studied, and from the age of 15 started working at the plant of Lenin, participating in his recovery.

With a penchant for drawing, after graduating from high school he applied to the Kiev Institute of Civil Engineering. In 1947, he successfully passed exams and was enrolled to the faculty of architecture.

Next, his creative and social way went through from the architect to the project manager of large-scale urban complexes, featuring the work of a large project organizations Kiev as STI "Promstroiproekt" (1953-1959), KievZNIIEP (1959-1995), as well as NTUU "KPI" (from 1995 to the present day).

Creatively developing, being a talented organizer and a man of great performance, he became the head of the creative workshop, leading a team of prominent experts. In the initial design work carried out by him as the head of a group of authors, there are included a number of industrial buildings in Ukraine, as well as public facilities in neighboring countries, namely: Youth House "Young Guard" in the city Krasnodon, Music and Drama Theatre in the city Grozny (Chechnya-Ingushetia), House of Trade in Kiev, shopping malls, buildings in Tashkent.

V.I.Lihovodov and his creative team great achievement was the creation of the perspective Master Plan NTUU "KPI" (1973-1975). Under the plan, the territory was divided into a number of areas: academic, residential, park, sports, economic, scientific and experimental. Planned facilities should provide training institute areas at international standards and the required amount of housing. Design of structures was carried out KievZNIIEP general designer and more than a dozen major design organizations Kiev, Moscow, Leningrad, Kharkov. In 1974, the plan was considered by the architectural community of Kyiv and the Union of Architects of the USSR State Construction Committee and approved by the Government of Ukraine, and in 1975 in the KPI it was began large-scale construction.

During the period of construction educational and industrial areas of KPI tripled and consisted of more than 320 thousand m2. It was built more than 20 new sites, including educational and laboratory buildings, made the initial core of the complex, Science and Technology Library, Cultural Arts Center, Sports Complex, dormitories №№18-20. The general plan "KPI" has become a model of planning complex large educational institution in the middle of a big city. In studying the experience of leaded by V.I.Lihovodov architectural workshop the representatives of Minsk, Moscow, Leningrad, Chisinau, Tbilisi, Tashkent, Berlin and Beijing are participated. Design and construction of the KPI were discussed in leading professional publications.

V.I.Lihovodov creative activity was highly appreciated by both the Union and the Ukrainian government, which noted his outstanding services to the country by the State Prize of the USSR Council of Ministers and the State Prize of Ukraine in the field of architecture.

For fruitful work as the chief architect of NTUU "KPI" he was awarded the title of Honored Worker of Culture of Ukraine. Since 1959 V.I.Lihovodov is the member of the Union of Architects of Ukraine.

Creative talent V.I.Lihovodov was showed during writing the books on the history of the revival of the university, dedicated to the 100-m and 110-m anniversaries KPI. These publications are valuable collections of rare historical documents, archival research and the author's conclusions. Among the books V.I.Lihovodov there are "KPI - from the first step to the first issue," "KPI - through the years", "KPI - first century."

Today V.I.Lihovodov together with the university management actively develops and refines architectural complex NTUU "KPI", strengthens its material base. He is implementing new promising projects (planned for construction in the area of university training for 2010-2015), They are as follows : Training Buildings of the Institute for Applied Systems Analysis, Faculty of Management and Marketing, mini sports complex, Faculty of aerospace systems, hotels, hostels for guests "Euro 2012", Ukrainian-Korean Educational Center of Information Technologies and others.

In addition to his multi-faceted professional activity V.I.Lihovodov is preparing to publish his collection of poems, shows another facet of his work.