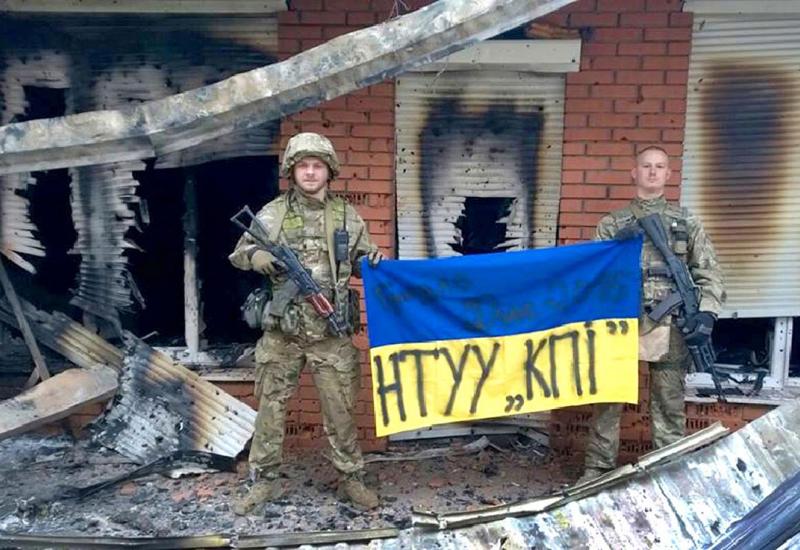 - We studied at the same faculty with Vlad, lived in the same dorm room. Both of us were at the same age of 21. We also fought side by side. On that day, during a special mission the explosion of the  shell tore off his leg below the knee and damaged other parts of the body. We took him by turns to a safe place and quickly provided the first aid. It seems everything had been done in such a situation, but the heart didn’t cope with the stress and Vlad died on the way to hospital. My best friend and brother has passed away. Vlad and I were going to join the Masters of the Faculty of Sociology and Law NTUU "KPI". And only I was the one who has joined ...

- Bogdan as you get into the zone ATO?

I was taking part in the revolution on Maidan (as Vlad, by the way). And before our victory, I was sure there wil be aggression of a neighboring state, as it will not allow Ukraine to be independent. So, after Maidan, I didn’t  think much time. I took a backpack and enrolled for "Azov" as a volunteer. At that time, "Azov" was on the stage of forming. If we take into account the short preparation I have been in a combat zone for 1 year and 3 months. Currently I am in the assault motorized infantry company.

- What hot spots in Eastern Ukraine  have you been to?

Marjinka, suburbs of Donetsk, Ilovaisk, Shyrokyne. The day before the fight in Ilovaisky we managed to get out of the city with losses.

- Bogdan, can you compare the state of military units - in general: MAT, Natshvardiya, volunteer battalions – before the outbreak of hostilities and now? Are thereany positive improvements?

For example: during my first fight my  colleagues I and were wearing simple shorts, no pouches, no pockets, which could hold spare ammunition. Everything else was in the same condition... Now we are much better equipped, though many things are bought for our money or with the help of volunteers. At first glance, the organization and discipline are improved, but, perhaps, it seems so, because there are no large-scale operations. Discipline in "Azov" is stricter than in the army units. Alcohol is forbiden. But still I believe that there is no proper organization. Unfortunately, some cadre officers measure their work by drinking vodka. The bribery is present among the people there. To me, the hands of those people who want to impose discipline in the army are tied up.

Despite all the difficulties that we are experiencing in the area of ATO I believe that our military forces will be getting stronger in all aspects and we will overcome the enemy.

V. Shkolny on the issue in Donbas
Bogdan Kushnir (left) - Vladislav Dyusov. The village of Shyrokyne, May 29, 2015