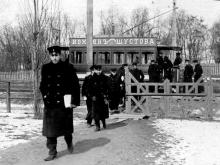 According to the social status student environment was heterogeneous. In prerevolutionary Russia, the door of high school, as well as all the way to education, was opened primarily for the wealthy. Educational qualification, high tuition, lack of student dormitories and scholarships have been a significant obstacle for the majority of the population. The rapid development of industry and the growing socio-democratic movement contributed to the democratization of the students, especially in technical colleges. As the technical universities trained people to work directly in production, and it is not always attracted wealthy people, the number of representatives of different ranks of the intelligentsia, who came from the workers and peasants, gradually increased in these institutions [28, p. 15].

Material and living conditions of these students were heavy, each of them annually had to pay 100 rubles for tuition, pay rent, food, buying textbooks and the necessary accessories. Note that the scholarship fund of the Institute was only 15 thousand rubles. So less than 5% of the students got the meager stipend [26, p. 13]. However, the Articles of Association of the Institute, at the suggestion of a member of the Commission on Institutions of Higher Technical Mendeleev, a clause was inserted on the right of the board of the institute exempt from tuition fees of about half of the students, but the situation was not changed essentially. The report on the first set of students noted the extreme poverty of significant numbers of students. Therefore, the administration of the university appealed to the public to support the needy [10, p. 27]. To help students there were used a variety of sources, but the flow of funds was scanty and unsystematic. To improve the situation in the spring of 1903 it was created the "Company assistance to poor students KPI", which fund included contributions and donations from members of the public receipts for signature sheets, income from charitable performances and parties, trade school supplies and the like. 1904, for example, the fund amounted to 10,402 rubles. Hence they were allocated funds for students to pay for tuition, clothing, books, tutorials, free meals, etc. [29, p. 7]. Substantial financial aid provided to students progressively minded professors of the Institute, who took part in charity events, public lectures, the proceeds of which went to fund student aid.

After the revolution of 1905-1907 the situation with disadvantaged students has deteriorated significantly. According to the student census conducted in November 1909, only rent pay took up half of their budget. Many students could not pay the fees. For example, from 2452 to 1909 students in 1036 had requested an exemption from payment. Of these 399 completely released and 261 -partially [12, p. 27]. In February 1910 it was created "Society of fast help to starving university students of Kiev ". However, this did not change the situation, because society had not at its disposal considerable funds. Since 1912 financial aid was totaling 614 rubles. Only 83 students of the city received the money from this fund.

The legal press was writing on the difficult financial situation of the student. Especially wide repercussions published in 1912 an article by M. Gorky, where he called on to help students, especially those from the democratic sections of the population, whose life was unbearable.

The need both to learn and to earn their livelihoods, as well as some lessons congestion caused by the fact that the training at the institute stretched to six - eight years or more, many students from poverty left high school, and only part of them ended up in four years (mean age, graduates reached 27 to 28 years). For example, in the Chemistry Department in the 1898-1912 was taken 1,155 people, and completed the course only 615, ie 53%; for engineering - 1520, and finished - 678 people, or 46.6% [12, p. 41].

Students who have successfully passed the final exams, awards the title: a mechanical and chemical departments – Industrial Engineer, Engineering - Civil Engineering, Agronomy - scientist agronomist. Rank industrial engineer gave the right to manage enterprises, to manage the construction of the factory, the factory and residential buildings, engage in construction work, and create designs of buildings. Civil engineers were able to draft and carry out construction work, scientists agronomists - manage farms, stations, factories, hold positions in the public service. Besides, Institute’s diploma opened the way to teaching in special education. Graduates have the right to wear a special sign of the sample [30, p. 7].

Graduate engineers had a good knowledge of practical experience. D.I. Medeleev gave a high assessment to the graduates of the institute in the report on the results of the first state examinations in the KPI: "With 35 years of experience in certification in higher education, I take the liberty to say that such a common set of special works of graduate students I saw at the students of the first issue of the Kiev Polytechnic, can not be found in any universities and technical institutes. Because there, most of these theses has presented a theoretical character and is not accompanied, as here, with their own laboratory tests which occur only as a special exception "[9. 157].

Institute graduates work not only in Ukraine, but also in the Caucasus, Central Russia, the Urals, Siberia, etc. [32, p. 102]. They won authority in enterprises and institutions engaged in responsible positions [2, p. 399]. KPI graduates were following outstanding scientists: in the field of metallurgy Acad. I.Sh. Bardin, builder Shaturskay and Dnieper HPP Acad. A. Winter, the first director of the Kuznetsk Metallurgical Factory D. Bilan, prof. Moscow Power Engineering Institute E. Romm, designer of aircraft engines Acad. A.A. Mikulin, the founder of the science of colloidal chemistry, director of the Institute of General and Inorganic Chemistry of the Ukrainian Academy of Sciences Acad. A. Dumansky, prof. the Department of Hydraulic KPI, Director of the Institute of Hydrology Ukrainian Academy of Sciences Acad. G.I. Suhomel, a distinguished metallurgist Acad. MP Chizhevsky and others.

So, Kyiv Polytechnic Institute from the very beginning of its existence became a prominent center for the training of highly qualified engineers, scientists and teachers.