FEL developed a device for screening the hearing of the newborn 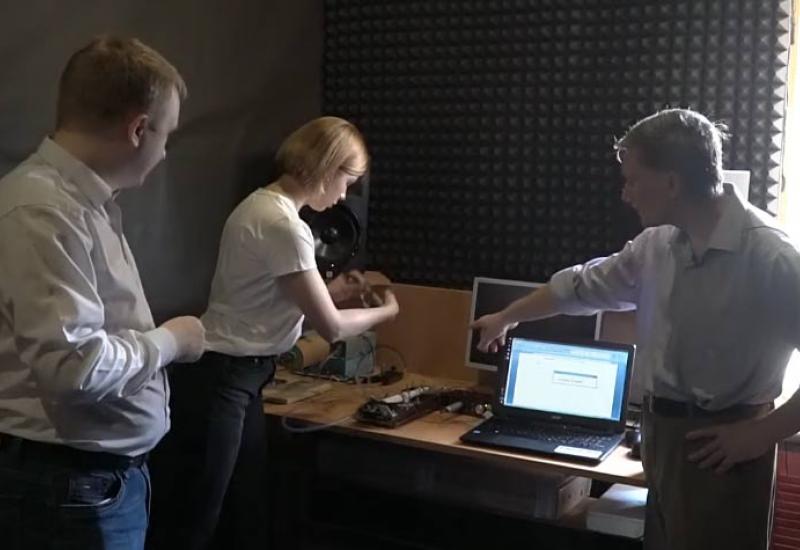 The device for screening the hearing of the newborn was developed by the students and postgraduates of the Faculty of Electronics at Igor Sikorsky Kyiv Polytechnic Institute. The echoscope was designed on the basis of Medical Acoustic study group. Young scientists worked under the guidance of Serhiy Naida, the head of the Department of Acoustic and Multimedia Electronic Systems.

“This is a pressing concern, because one baby in every thousand of the newborn is hard-of-hearing. If a special hearing aid for children is not used at the age of 6 months, the child will grow with hearing problems. If the problem and location of the injury (middle or inner ear) are diagnosed timely, the appropriate development of a child can be arranged”, - Sergiy Naida says.

The Department in cooperation with O. S. Kolomiychenko Institute of Otolaryngology of the National Academy of Medical Sciences of Ukraine have been working on the problem of early diagnosis of hearing problems for 25 years already. During those years, collaborative patents and journals were established.

The first prototype models of the echoscope were complicated in usage and manufacturing. The reason is that they required both design of analog part and the development of a computer with special software. Instead, a new model of an echoscope designed at Igor Sikorsky Kyiv Polytechnic Institute can work with help of a standard computer which is available in every health clinic.

The echoscope designed at FEL is absolutely safe, it doesn’t require high qualification of the doctors and it is cheaper than foreign analogues (the approximate price after entering production is 10 thousand UAH, whereas foreign device is ten times more expensive). What is more, it has far better performance, because it quantifies the diagnostics: the quality of hearing is calculated in percents and the results are demonstrated immediately after the procedure.

“The designed model uses already available computer and the outer sound card. Only acoustic part of this device is developed on the basis of an auscultoscope. The device is based on a comfortably loud short impulse which is generated into an ear of a newborn child. Then we record an echo signal which came through the whole auditory system, and then the signal is processed”, - Serhiy Naida explains how the echoscope works.

Now the device exists as a functioning laboratory model. The engineers plan to finish the work by creating an autonomous portable fully digital device, which would give a doctor the answer on the question “Does a child have hearing problems or not?” However, Medical Acoustic is in need of financing to develop a device in a variant that would be appropriate for maternity homes.

The articles about the echoscope are published in international and Ukrainian academic journals and medical publications. In November 2019 the device was presented at the international exhibition in China. However, the echoscope is not the only medical project of electronic engineers which is worth attention.

An acoustic thermometer for determining the internal temperature of human’s body was designed at Medical Acoustic (this device is used for diagnostics of tumors, and for control of the device for diathermy of tissues to avoid heat shock); suprasonic broad-band therapeutic device for physiotherapy (used for diathermy of tissues, due to broad-band regime it is absolutely safe); musical therapy method based on the functioning of complicated audio signals (the device controls psychic state of a person with help of music chosen on purpose; for example, calms a person down).

Unfortunately, there is often lack of money for finishing the experimental models which could draw attention of medical establishments.

Despite there are no investors, the engineers work on new projects that definitely will be useful for doctors and patients.