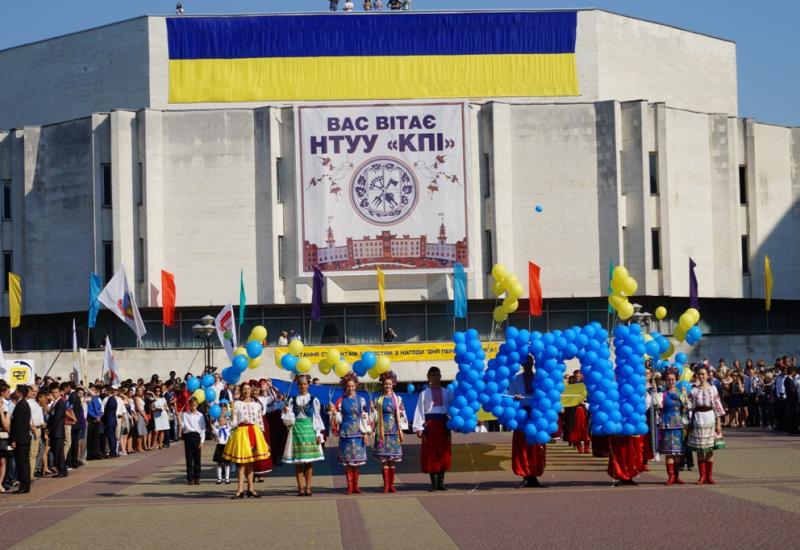 Traditionally, immediately before the new academic year, students and lecturers of the universi-ty celebrated first year student Day on the square of Knowledge of NTUU “KPI”

Almost 4 thousand young people from throughout of Ukraine and other countries this year be-came the members of an expanded and famous for its traditions family of Kyiv polytechnics. The last year graduates as well as renowned predecessors of current student generation – famous state and public figures, scientists, industrial people were there to congratulate novice students. Among these people were the Prime Minister of Ukraine for the period of 1987-1990 and 1994-1995 Vitalii Masol, deputy of Ukraine Dmytro Andriievskyi, the chairperson of Kyiv local branch of education and science of Ukraine trade union Olexandr Yatsun’, the chairperson of graduates department of KPI in Poland Yanush Fuksa etc.

To start celebrations, the national flag of Ukraine has been brought in and hoisted over the square of Knowledge.

«On behalf of multi-thousand collective of Kyiv polytechnics we solemnly congratulate the new addition. We as their older colleagues believe that first-year students made the right choice, since Ukraine is in anticipation of breakthroughs in science, technology and the youth has to be the first to advance these spheres. You have already heard the names of those famous people who changed the world, being the students and fellow workers of Kyiv polytechnics. KPI opened doors to more than 3 thousand specialists, who worked and work throughout the world”, - the rector of university, academician of NAS of Ukraine, Mychailo Zgurovskyi addressed to first year students. But KPI - it is more than just university. It is a great Ukrainian youth academic, innovative and educational center. And that is why it stands for development different talents. Our graduates were not only renowned scientists and engineers but also famous musicians, writers, sportspeople …. Dear first year students, all opportunities of our university are available for you. Use them. Use everything that gives you extremely creative atmosphere of KPI. I wish you to be worthy of your predecessors, be the patriots of Ukraine and real people!”

After the congratulations, the parade of students – the winners of international and all Ukrainian student Olympiads, champions and prize winners of sport competitions followed the celebra-tions.

But the parade was preceded by solemn march of the youngest participants – first-grade students of primary school “The future of polytech” of Polytechnic lyceum of NTUU “KPI”, holding firmly with hands of their older fellow students - the winners of all Ukrainian student Olympiad and competitions of scientific student works in 2014-2015. Kyiv polytechnics received 48 awards in such Olympiads for the last academic year, they also represented honorably the university at the scientific works competitions.

After all solemn marches, the student of Institute of Printing and Publishing, Valeriia Andreieva delivered a welcoming speech to the first year students.

The culmination point of celebrations was setting up “The fire of knowledge” – the symbol of abiding desire to knowledge, studying and creation. The first year student of faculty of Instru-mentation engineering, the prize winner of scientific competition of Junior Academy of Science Bogdan Melnychuk set fire in cup over the square of Knowledge.

Many-colored balloons together with letters “KPI” soared into air over the university thereby surmounting the ceremony.

An official part of celebration continued in classrooms of institutes and faculties, where first year students had possibility to get acquainted closely with their lectures and each other and get student ID cards as well.