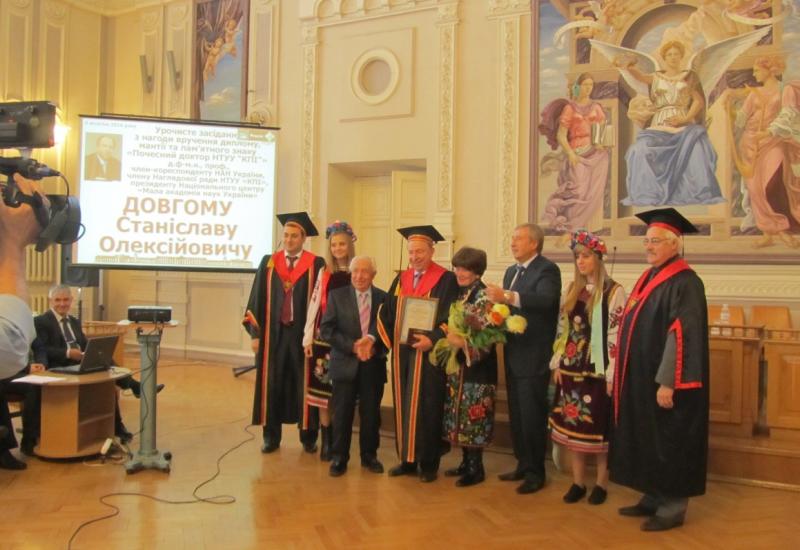 October 6, the Honorary degree Doctor of the University was confeered at the meeting of the Academic Council of NTUU"KPI" to the well-known scholar, public and political figure, President of the Minor Academy of Sciences of Ukraine, member of the National Academy of Sciences of Ukraine Stanislav Dovgiy.
The Honorary degree Stanislav Dovgiy was approved by Academic Council NTUU"KPI" decision for his significant contribution to the development of national education and science, forming a system of support for talented young people and promotion of the spiritual education Kyiv Polytechnic students.
Rector of the University Michael Zgurovsky and Scientific Secretary of the University Anatoly Melnichenko handed diploma, gown, bonnet and sign of the Honorary Doctor to Stanislav Dovgiy.
The solemn meeting of the Academic Council of NTUU "KPI" was attended by distinguished guests - Academician of the National Academy of Sciences of Ukraine Hero of Ukraine Viktor Bar'yakhtar, director of the Institute of Hydrodynamics of NASU, Academician of NAS of Ukraine Viktor Hrinchenko, Honorary Consul of Montenegro in Ukraine Predrag Milović, known Ukrainian poet, translator, and a public figure Dmitro Pavlychko, director of the Institute of Cybernetics named after V.M. Glushkov NAS of Urkaine, NAS academician Ivan Sergienko, famous Ukrainian specialist in art, culture and religious studies professor Dmitry Stepovik, family members S.Dovgiy and others.
Stanislav O. Dovgiy was born in Kirovograd July 23 1954 After graduating the Mechanics and Mathematics Faculty of Taras Shevchenko State (now National) University of Kyiv S.O.Dovgiy begun to work at the Institute of Hydromechanics of NAS of Ukraine. He started there as a graduate student and passed all the way till the head of the department.
Under his leadership, the organizational and technical system OTS "Inform-Chernobyl" was established, which later became the base for Minchernobyl of Ukraine.
From 1991 to 1997 S.Dovgy was the General Director of the Scientific and Production Association "Topaz-Inform". Later he became the director of the Ukrainian Research Institute of Environment and Resources of the Council of National Security and Defense of Ukraine (1997-1998), Minister of Science and Technology of Ukraine (1998-1999), a member of the Council of the Intellectual Property and Technology Transfer under the President of Ukraine (1999-2000), Chairman of the State Committee on Science and Intellectual Property (1999-2000), Chairman of the Board of JSC "Ukrtelecom" (2000-2001), Chairman of the State Committee of Communications and Informatization of Ukraine (2001-2002), Chairman of the Supervisory Board of "Ukrtelecom" (2001-2003), first Deputy Chairman of the Verkhovna Rada Committee on Construction, housing and Utilities of transport and communication, the Secretary of the Special Committee of the Verkhovna Rada of Ukraine on the future, co-chairman of the Party of Industrialists and Entrepreneurs of Ukraine (2002-2006) , a member of the Verkhovna Rada Committee on Budget (2006-2007), director of the Institute of telecommunications and Global Information space of the NAS of Ukraine (since 2001). Since 2007 S.O.Dovgy is a member of the Presidium of the National Academy of Sciences of Ukraine.
S.Dovgiy has authored more than 240 scientific works, including 40 inventions, 28 monographs and textbooks. Among his students there are about 20 PhDs.
From his student years S.Dovgiy actively engaged in educational and pedagogical work. Since 2000 he is the President of the National Center for "Minor Academy of Sciences of Ukraine", whose main task is to find and support talented students, the creation of conditions for their development and individual work with them.
He was awarded the Order "For Merit" III degree, Diploma of the Cabinet of Ministers of Ukraine, Honorary Diploma of the Verkhovna Rada of Ukraine.
Stanislav Dovgiy activities closely linked to the NTUU "KPI". He is a member of the Supervisory Board of the University. As a long standing president of the National Center "Minor Academy of Sciences of Ukraine," he strongly promotes the integration of its sections of natural and technological trends in the work of relevant departments and laboratories of the KPI. So the students interested in modern science and technology have the opportunity to work side by side with recognized experts in their fields, adult researchers and students. The teachers of the university, in turn will get really motivated by potential applicants and possibly future colleagues. Fruitful co-operation of the Minor Academy of Sciences of Ukraine with the University also allows young researchers to participate in research activities conducted at the university, round table discussions on the history of art, etc. .. At the S.Dovgiy initiative to restore the traditions interfaith university church was built and consecrated in the name of St. Nicholas at the territory of KPI. A public presentation of scientific and educational "Portal Shevchenko", created on the S.Dovgiy initiative for the 200th anniversary of Taras Shevchenko, was held in NTUU"KPI" with the direct participation of MAS of Ukraine.
After the award ceremony, Stanislav Dovgiy read a lecture "Nonlinear nonstationary dynamics of the environment" in which he spoke not only of purely theoretical aspects of a wide range of complex problems and mathematical modeling of natural phenomena and operation of technical systems, but also on the practical application of the results of that research, particularly in the design of aircraft, wind power energy, urban planning etc .. However, at the beginning of his lecture, he remembered his teachers in science and life, and sincerely thanked the members of the Academic Council and employees of the University for the continued cooperation and assistance in his activities and work of the Minor Academy of Sciences of Ukraine.
The last point, or rather, am exclamation mark in the celebrations was pointed by Dmitry Pavlychko in emotional speech, which he ended with the words: "I ​bow to this holy temple of science, your temple, and my friends who today are highly honored."