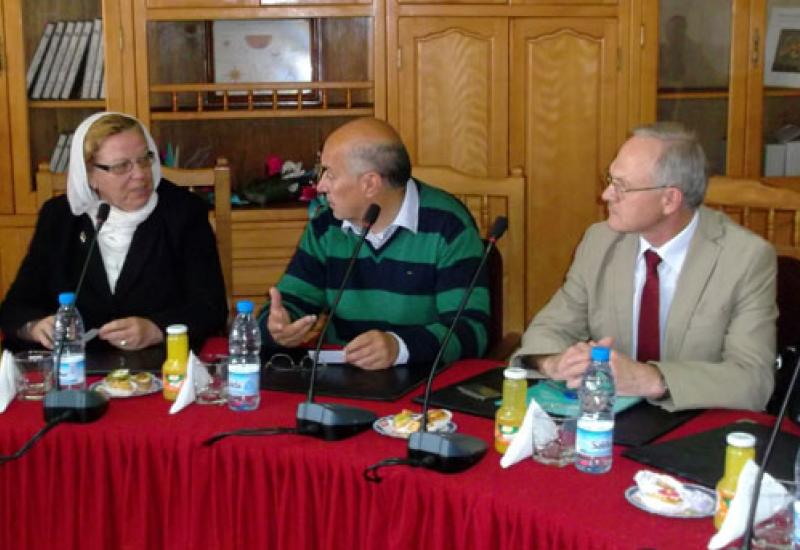 The delegation of "KPI" consisting of FASS Dean Professor O.Zbrutsky, Assistant of University principal B.Duda, coordinator of international projects, FASS engineer L.Stetsyuk, this November visited Algeria. The purpose of the visit was the signing of an agreement, educational and scientific cooperation with another university - Science and Technology of Oran - the second largest and economically important city of Algeria, and familiarity with one of the universities in Western Sahara.

At the beginning we visited Saad Dahlab University of satellite town of the capital of Algeria - Blidy, with which we are united by existing of collaboration agreement. This university has recently opened its first training in Algeria Aviation Institute, which increases interaction with our faculty of aviation and space systems for the organization of training for Algeria. The university supported the proposal of "KPI" on the establishment of common scientific and educational and cultural Algerian-Ukrainian center that would integrate work with our universities in Algeria. Work on its creation moved into its final phase. Saad Dahlab University is interested in opening a branch for our preparatory department in it. By the way, aviation Institute of the University consistently has one of the highest competition entrants. Together with the head of one of the 4 research laboratories of the Saad Dahlab University is subordinated to the Ministry of Education of Algeria,  M.Rahmuni - in the recent past he was our graduate student, delegation was received at the Embassy of Ukraine in Algeria, where the discussion was held between Ukrainian and Algerian universities and was expressed approval of the work of the University.

The University of Science and Technology of Oran, which is situated as capital of the city Algiers, on the Mediterranean coast, there a party to the Algiers Agreement on cooperation between the two universities was held. Principal of University of Science and Technology Prof. Mrs. Aicha Derdour emphasizes readiness to develop cooperation in the field of aeronautics and unmanned aircraft, for what the university created a new science lab (supervisor Prof. Imine Bachir), and also foundry and mining. Power economy of Algeria has long been built on coal, which continues to produce the large reserves of oil and gas. The country widely uses local granite and marble. Wishes to involve universities in the south of Algeria to collaboration to jointly solve the issues of creating renewable energy, optimizing the thermal regime and increase comfort homes using local materials, drinking water supply of settlements in the desert, monitoring of highways and pipelines in the state border sparsely populated areas were expressed.

These problems and possible participation of specialists of the University in their resolution were discussed at the University of Beshar in Western Sahara. The University has modern laboratories for research, which, along with the teachers who are masters on the implementation of projects. Principal of the University, Professor Abdellah Laoufi invited us to mutual work, which is made with universities in France and Japan, adding that this peripheral state universities have some preferences.

Signed agreements with our university and our attention to the visit of the delegation from the Algerian media show Algerian interest in such participation. Signing the agreement on cooperation in Oran was highlighted in "Unmanned Aerial Vehicles: Algerian and Ukrainian Universities cooperation " in one of the central Algerian newspapers.