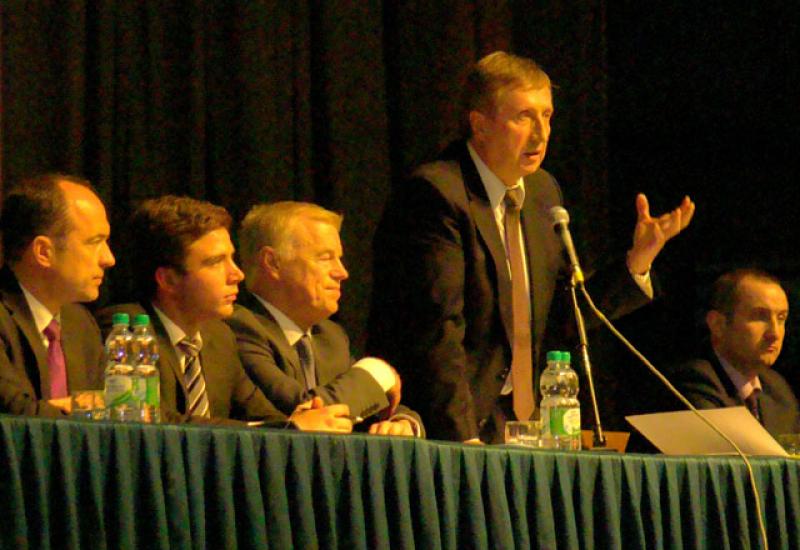 On April 10, 2014, the NTUU “KPI” Staff Conference took place in the University Culture and Arts Centre.

656 delegates took part in the conference – over 80% of those elected at the faculties, institutes and departments, and over 30 guests. Great interest and concern over the university's life allowed to organize and conduct the conference smoothly and constructively this year. This was made possible by the productive work of the all-university commission of execution of the last year's Collective Contract and development of the next period's Contract, created jointly by the administration and the staff's trade union committee.

In an extensive report, Rector M.Z. Zgurovsky covered all aspects of the university's life in 2013. The questions, posed again and again to the staff and the students of KPI by modern times, were described in the report by V.I. Molchanov, the trade union committee head.

Pursuit of research and innovation venues, effective training of scientific and educational personnel, engagement of the KPI community in financially important project both at home and abroad, increasing the representation of the polytechnics' scientific papers in scientometric databases, together with gradual strengthening of the materiel and technical base in the hard economic realities of today's Ukrainian state, and securing the socio-economic guarantees for the university's staff – it's but an incomplete list of goals the administration, with the support of staff and student committees, will be striving to accomplish in the following year.

The delegates unanimously voted to approve the Act of the commission for the complete execution of the last year's Collective Contract, the Rector's and trade union committee head's reports, and the satisfactory assessment of the Rector's work during the last period.

Following the discussion of the April 2014 – April 2015 Collective Contract project it was approved as a basis and in general.

In the end, in accordance with current legislation, the Conference elected the Commission for University Labour Disputes and the Council for Housing and Welfare Issues for a term of one year.