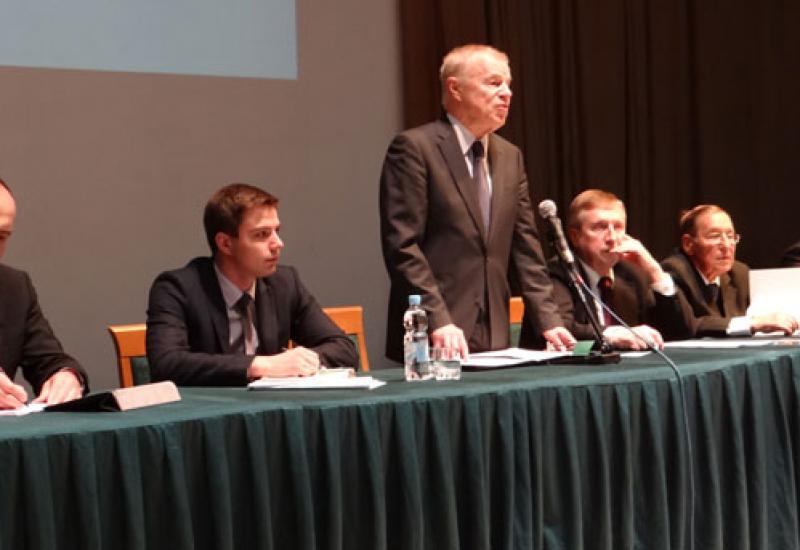 April 24, 2013 in the center of culture of art of NTUU “KPI took place the conference of working staff of the university.

Thorough rectors’ report on the main streams of university work was augmented by quantitative and qualitative indicators, were showed by all the delegates of conference. Boundary events have working staff and students living this year in KPI for the last year, found their reflection in labor union heads’ reports. Conference’ delegates had considerable position, and so all the public and during the valuation of administration work and trade union organization, was encouraged.

Results of work of university commission on checking execution of Collective agreement of the period since April 2012 till April 2013 were formed if the form of the augmented act, confirms that the last year collective agreement was totally executed. The exception were some separate points of the 3d part which are about particular execution of ground loop and quality of electric cabels isolation in subsection rooms of university, unfinished events in preparing for exploitation in winter boiler and heat points of the university, and also incomplete security of timely roof cleaning of snow, ice corks in the discharge systems.

.Somewhat different was the discussion of the collective agreement on the new term. All parts which were connected with the staff, were considered and unanimously accepted in redaction, that work commission had worked out.

Students’ part, part 9 was under stormy discussion. Agreement between administration and persons who are studying. This agreement was concluded between administration and labor organization of students from 1993, in 2009 the Students council of NTUU “KPI” also signed this agreement. Before beginning of the conference the students’ council told about impossibility to be the part signing the new collective agreement. Though, the law says that it is not important for the students’ organization organs to be presented on the process of collective agreement discussion. Administration of NTUU “KPI” weight in Students’ council mind and expressed unavailability to sing the collective agreement only with the labor organization of students. In such way students council got right to put a veto on agreement.

In the result of numerous students and staff came outs, rector proposed unprecedented solving the problem – administration would undertake all, without exception, obligations before students and student organizations, which are wrote down in all the projects of collective agreement, don’t demanding any requests from students. Also rector guaranteed to pay special attention on the question of communication between department of educational and science work and students organizations of the university”

In the end of the conference, the complement of Housing council and social questions and commission on labor arguments were elected. Also appeal about cancelling the part 39.2 of national plan of work on 2013, approved by the edict of President from 12.03.2013 №128/2013 about normative and legal acts for showing the number of students on one teacher to 18 persons, to state organs was approved by the work collective.