Mathematicians on the Ukrainian coins 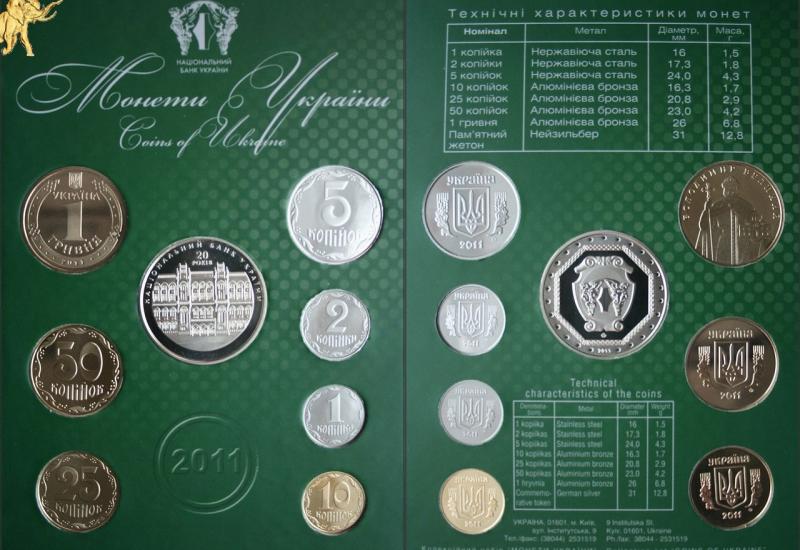 For ten years existing of the Mint of the National Bank of Ukraine issued three hundred jubilee and commemorative coins, combined in 23 thematic series, one of the most significant of which is the series "Outstanding Personalities of Ukraine". The coins of this series dedicated to prominent public figures, scientists, artists. Among the famous personalities, there are some  representatives of mathematics - science, which in the words of the famous Carl Gauss, is the queen of sciences. The first such coin denomination of UAH 2 was released in 2001 – to the 200 - th anniversary of outstanding mathematician Michael Ostrogradsky (1801-1862). The obverse of the coin in the centre shows a stream of integral curves in rectangular coordinate system, the small State Emblem of Ukraine, inscriptions in four lines: UKRAINE, 2001, 2 hryvnia and the logo of Mint of the National Bank of Ukraine. On the reverse of the coin, there is a portrait of M.V. Ostrogradskiy, from the left - integral fractional rational functions (integration method of such functions  named after him), from the right side - the inscription in two lines in a semicircle, 1801-1862, Michael Ostrogradsky. 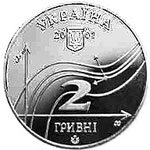 M.V. Ostrogradsky born in 24 of September, 1801 in the village Pashenivka of Kobelyatsky district in Poltava region. His main scientific works relating to mathematical analysis, theoretical mechanics, mathematical physics, probability theory. In addition, he has written a number of excellent textbooks in elementary and higher mathematics. M.V. Ostrogradsky was a member of five academies - Paris, St. Petersburg, Rome, Turin and the American. Curiously, but M.V. Ostrogradsky had not received Russian scientist degree: in 1820 reactionary ambivalent professors of Kharkov University deprive talented young man of graduation diploma and certificate Ph.D., explaining their decision to "free-thinking" of Ostrogradskiy and not attending his lectures on theology. And just in six years the renowned French mathematician Cauchy had wrote about M.V.Ostorgradsky "This young Russian man has great insight and highly educated." The same opinion about him were other teachers of Ostrogradskiy in Paris Collège de France, where after Kharkiv he continued studing of mathematics: Laplace, Fourier, Ampere, Poisson. 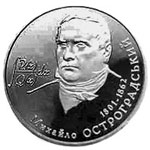 Commemorative coin "Alexander Lyapunov” denomination 2 hryvnia was released in 2007, made of nickel silver and is dedicated to the 150th anniversary of the birth of the notable mathematics and mechanics, academician of Petersburg Academy of Sciences Alexander Mikhailovich Lyapunov (1857-1918), whose works refers to celestial mechanics, mathematics physics and probability theories. On the coin obverse above there is the Small State Emblem of Ukraine, under which the inscription in two lines - NATIONAL BANK OF UKRAINE, geometric image problem of celestial mechanics , and below - the inscription: 2 UAH / 2007 and the logo of Mint of the National Bank of Ukraine, and right semicircular is placed inscriptions: Alexander Lyapunov / 1857-1918. 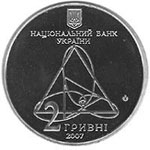 One of the most prominent works O.M.Lyapunova was his doctoral dissertation "The general matter of stability of motion", where at length discussed the problem of stability of motion systems with finite number of degrees of freedom. Thesis held on 30 September in1892 at Moscow University, and one of the opponents was made by the founder of modern aerodynamics professor M.Ye.Zhukovskyy, who once continued on a study on the integration dynamics equations, which were started by MV Ostrogradsky. 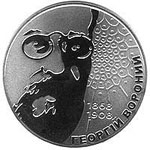 Jubilee coin "George Voronoi" 2 hryvnia denomination released in 2008, made of nickel silver and is dedicated to the 140th anniversary of the birth of one of the world's most famous mathematicians George Feodosiyovych Voronoï (1868-1908) - one of the founders of geometry of numbers, of several new directions in analytical number theory and geometry. In the obverse of the coin is stylized pictured a Voronoi diagram - the Small National Emblem of Ukraine with inscriptions: 2008/2 HRYVNIAS, left in a semicircular - NATIONAL BANK OF UKRAINE and the logo of Mint of the National Bank of Ukraine. On the reverse is a portrait of George Voronoï (left), and from the right - Voronoi diagram, years of life 1868/1908, and below semicircular inscription - George Voronoi. 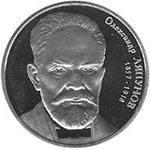 Works of Georgy Voronoi have particularly important meaning in the last twenty years. This is due to the development of computer graphics, molecular biology, radiation physics, cosmology, creation of artificial intelligence. During his short (40 years) life H.F.Voronyy wrote around 12 scientific works, but 8 of it are now successfully used in almost all European countries, the US, Canada, Japan, Australia, Hong Kong, New Zealand ... This is - unique phenomenon in mathematics, where the funding is usually within a few years are considered obsolete. 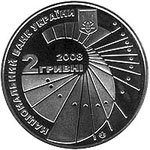 In Seoul (South Korea) operates Research Center on Voronoi Diagrams, in 2004 year in Tokyo (Japan) were launched annual International Conference on Voronoi diagrams, and Institute of Mathematics of the National Academy of Sciences of Ukraine, since 1993, ones at five years conducts international conferences, dedicated to the current state of development of science fields, embodied in the works of Voronoi.

I'd like to hope that not a one representative of the "Queen of Sciences" will be dedicated national coins that remind us words of the American philosopher D.Santayany (1863-1952): " Just as all arts aspire to the music, so eager sciences reach out for mathematics. "