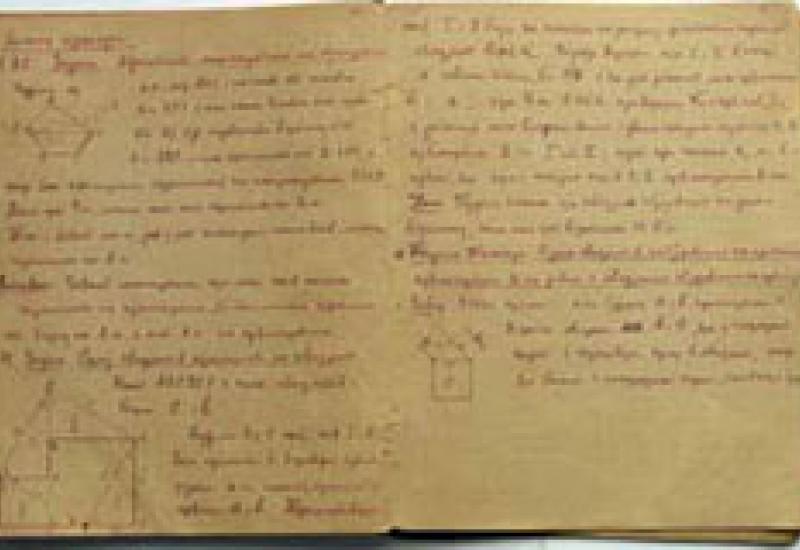 "Manuscripts do not burn ..." - and sometimes it is still true!.. Village Savarka on Bohuslavschyni. Shed, where the teacher Maria Ishchenko and spouses Chalyh lived in the twenties of the twentieth century... And in November 2005, the village headman Alexander Krivoruchko found a bag full of papers, books in the attic of the hut ... Yellowing, gnawed by mice notebook sheets were the summaries of the teachers working in Savarskiy school in those days.

And among them was Kravchuk’s handwritten textbook!

A notebook with 96 pages, stating the following in the front page:

Quite unknown and unpublished textbook! At least it was in no list of scientific and methodological works of M.Kravchuk (we mean even if considering his recently published works in Kiev, "Science-fiction work" (2000), "Selected mathematical work" (2002 g.), "The development of mathematical ideas Kravchuk" (2004) and others.). 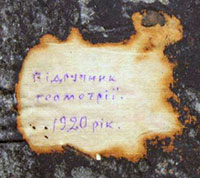 Mikhail Filippovich Kravchuk (1892-1942) - the most well-known Ukrainian mathematician of the twentieth century, world-renowned scientist, educator, social activist. His scientific works from various fields of mathematics (algebra and higher mathematical analysis, probability theory and mathematical statistics, etc.) reached the entire world of science. Kravchuk’s polynomials, Kravchuk’s moments, Kravchuk’s formulas, Kravchuk’s oscillators have long existed on the pages of research, and in 2001 due to the search of the scientist I.Kachanovsky (USA) it was figured out that M.Kravchuk took part in the invention of the the world's first electronic computer !

Throughout his unfortunately short and dramatic life (it ended up in camps in Kolyma) M.Kravchuk successfully combined great scientific work of social and cultural work, in particular - in the educational field. In the 20 years he publishes a series of books, manuals, programs for secondary schools, colleges and universities. Later he concludes the program of the course "Elements of Mathematics in the adaptation to agricultural professional schools." His works "Introduction to Higher Mathematics" (1932), "Elements of the theory of determinants" (1933), "Selected questions the foundations of infinitesimal analysis" and others played an important role as propaedeutic courses in higher mathematics.

And now you’re flipping through the pages of this manuscript!.. Young talented mathematician already in the first years of his professional work didn’t stand aside the issues of general education. He who has not only taught mathematics in secondary schools (I, II Ukrainian schools, electrical school, etc.), but also at the university, other institutions of Kyiv, being desperate about financial difficulties (which our entire intelligence experienced in that times) in the village Savarka (1920-1921.), painfully feeling the lack of textbooks, undertook to conclude this book.

He is working hard in the evenings and night hours, alternating between the research on higher mathematics (the theory of variable matrix transformations of quadratic forms, the theory of correlation, interpolation theory of functions of a real variable, etc.) and the best ways to apply elementary mathematics for students in grades 5-7. 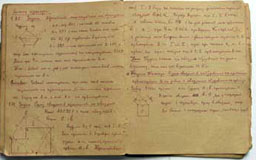 Once again you’re convinced that Kravchuk’s mathematical language is like Mighty Ukrainian scientific-mathematical style. Vigilance and depth research study of Kravchuk’s works, linguistic and terminological point of view today would serve relevant in such matters as further development and improvement of Ukrainian mathematical terminology.

Rereading again and again this manuscript ... amazing ability to capture the author's brief, deep and yet simple and easy course exchange living language of geometry within seven-year school.

Also interesting to read about problems and methods resolutions, submitted in the manuscript, they do require the student to have flexibility in thinking, virtuoso thinking work, tenacity, perseverance ...

Thus, M.Kravchuk’s scientific and technical work again and again highlights the need for education reform, including mathematics in our country (fundamental changes in existing programs, the content of textbooks, manuals, etc.).