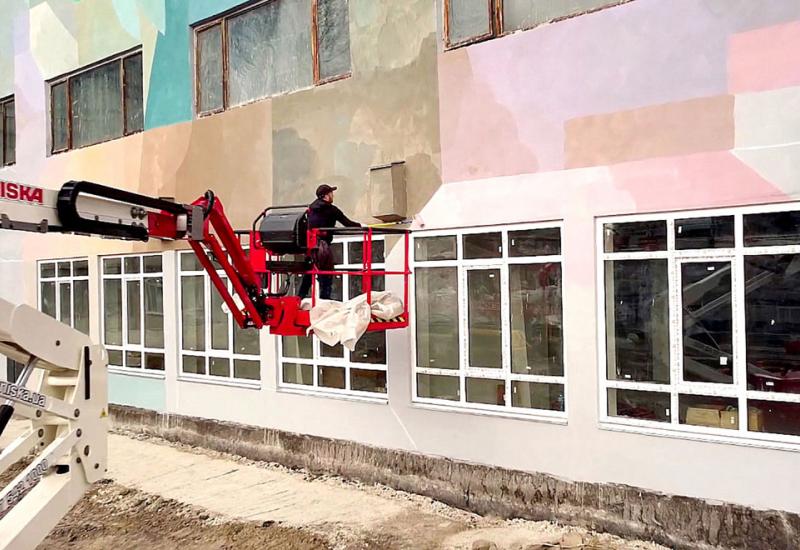 There is a new mural on campus wall #18 on the side of Borshchahivska Street. The mural did not show itself up on the concrete wall: a famous French artist and a master of street art from Lyon Nelio created it. Some experts say Nelio's style is at the intersection of figurativeness and abstraction. That is why his works usually combine a single collage of colored geometric shapes and almost three-dimensional elements. Just like in real life, where the opposites belonging to the macro-and microworlds build the real world around us.

The artist worked on this painting as part of the French Spring Festival in Kyiv. It is traditionally held in April and supported by the Embassy of France, the French Institute, and the Alliance Français network in Ukraine. Nelio comments on the project website, ‘While working on this mural, I wanted to stay within the limits of abstraction but at the same time convey nature, science, and technology ... You can interpret the graffiti as a combination of atoms and molecules, and as a distant landscape.’

‘Urban art, or street mural art, is quite popular in the world. It is developing in our country today because, unfortunately, we inherited the Soviet-style of building. Soviet buildings are of a rather strict architecture and somewhat barracks type. We can find such buildings on the University campus territory and along the rapid tram line. Mural paintings are designed to dilute the urban surroundings with such colorful splashes and fill the urban space with humanistic ideas. You can notice that this mural destroys the strict rectangular architecture of administrative buildings, which is a very wise decision,’ said Honored Artist of Ukraine Associate Professor of the Department of Graphic Arts Oleksii Rudenko, ‘As far as I know, the French partners helped us, and it's very nice. In France, mural street painting is very popular…’

On 19 April, Advisor on cooperation and cultural activity of the Embassy of France in Ukraine, Director of the Institut français d'Ukraine Natalie Beras and Curator of art projects at the Embassy Oleg Sosnov, jointly with the author, presented the mural to the University.

According to Oleg Sosnov, the artist made the painting within a week, but preparation for this work lasted several months.

MEMO ITEM: Nelio was born in 1982 in eastern France. He is a self-taught painter. In his art, he combines symbols, letters, landscapes, and primitive forms. His style is inspired by a wide range of artistic phenomena - from Pablo Picasso to graphic design, illustration, art history, and architecture.

The University Doesn’t Want to Remove the Panel