Institute of Physics and Technology Celebrates the 25th Anniversary! 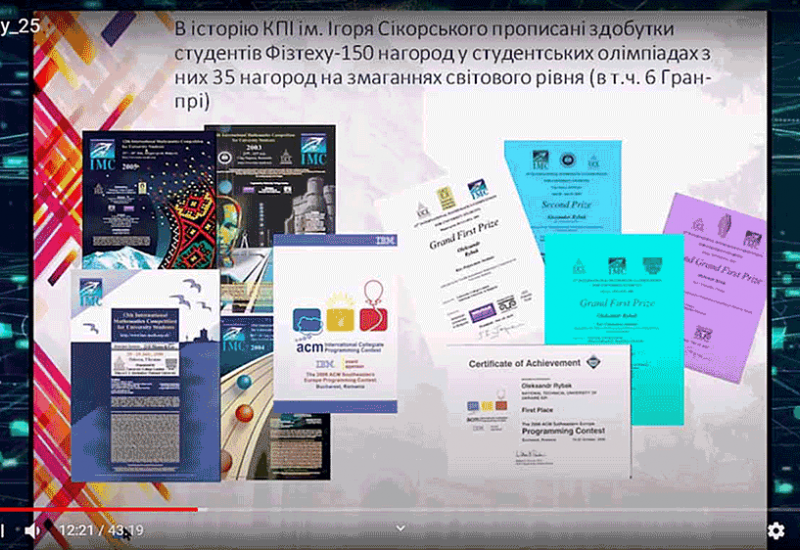 The Institute of Physics and Technology of Igor Sikorsky Kyiv Polytechnic Institute has celebrated its 25th anniversary.  On November 23-28, a holiday week dedicated to the Institute anniversary was held through distance mode.  The celebration program included a demonstration of several fascinating videos from the life of the IPT (ФТІ), acquaintance with its history, fun student activities - cyber games, quizzes, student streams.  Links to interactive events or certain videos appeared just before the time specified in the program. These links are now posted on the official YouTube channel of the IPT.

While the IPT faculty was streaming and partying many colleagues and friends congratulated them with warm words and wished the very best.  Recor of Igor Sikorsky Kyiv Polytechnic Institute, IPT Founder Mykhailo Zgurovsky was the first to congratulate his colleagues, ‘Our IPT is celebrating the 25th anniversary and, nevertheless, a lot has been done during this period of time. In fact, the fundamental principles of physical and technical training have been established.’  Director of the IPT Oleksii Novikov recalled the history of the IPT, thanked all those involved in its creation, expressed special gratitude to teachers who today demonstrate a commitment professionalism and dedication to their work.  He also mentioned enthusiastic students who put a lot of effort into making the holiday happen.  Oleksii Mykolaiovych named the main achievements of the faculty: strengthening the physical and technical system of higher education in our country in the field of natural and technical sciences, growing demand for all specialties, increasing the state order in recent years, scientific achievements, students victories in international competitions, establishing the “Techno-Ukraine” international pre-college science competition.

When the Institute of Physics and Technology solemnly received commendations and diplomas from the Academic Council of Igor Sikorsky Kyiv Polytechnic Institute, a famous scientist who helps a lot in organizing a global competition of scientific and technical projects “Intel-Techno Ukraine” (now – “Eco-Techno Ukraine”), Doctor of Biological Sciences, Corresponding Member of the NAS of Ukraine, Director of M.G. Kholodny Institute of Botany, National Academy of Sciences of Ukraine Sergei Mosyakin took the word to congratulate the IPT.

Colleagues from the Institute of Mechanical Engineering, particularly Director of the IME (MMI) of Igor Sikorsky Kyiv Polytechnic Institute, Corresponding Member of the NAS of Ukraine Mykola Bobyr and Director of the Lyceum “Leader” Dmytro Kravchenko and Director of Kyiv Natural-Scientific Lyceum No. 145 Mykola Levtyk joined in the congratulations.

On behalf of the alma mater graduates Director and Co-owner of “Infosafe IT”, a member of the Board of the Non-Governmental Organization “Ukrainian Information Security Group” (NGO UISG), an information security specialist Viktor Zhora greeted the IPT with its anniverssary.

The anniversary festive program also included online meetings of students with IPT graduates, on which they discussed opportunities provided by the IPT, applying for a successful job and the best skills to include on applicants’ resume.

The team of students and teachers of the IPT did everything possible to make the holiday week amusing, informative and useful.