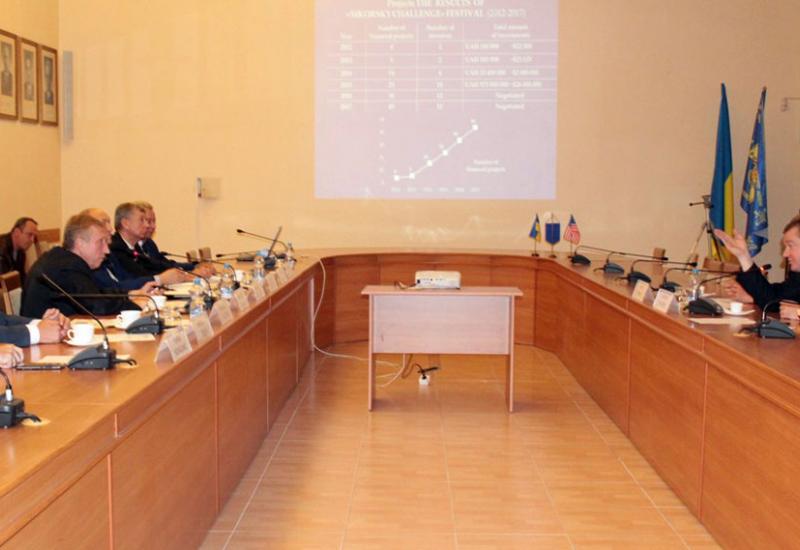 On September 18, the wide range of issues discussed by the participants of the meeting with the famous businessman, owner and manager of the aerospace company "Firefly Aerospace" (USA) Maxim Polyakov and his legal assistant Igor Spodin during their visit to Igor Sikorsky Kyiv Polytechnic Institute included the organization of training of qualified specialists for the space industry of Ukraine in Igor Sikorsky Kyiv Polytechnic Institute, the revival of research and development work in the industry, the regulatory and legal support for innovation activities of higher education institutions, etc.

The "Firefly Aerospace" Company, headed by Maxim Polyakov, is a private aerospace enterprise. Its headquarters are in Texas (USA), but the company also has offices in Washington and Tokyo. Since May 2018, its Ukrainian branch in Dnipro (Firefly Airlines Ukraine LLC) has been operating. The company develops light launch vehicles for small and medium satellites. Its slogan is "Making space for everyone" because the company professes and promotes the ideas of "New Space". They are to implement ideas of increasing space availability through technical innovations that reduce the cost of launch, as well as overcoming the administrative and logistical constraints associated with dependency on national space institutions. Thus, cooperation with Igor Sikorsky Kyiv Polytechnic Institute as one of the leading innovative Ukrainian universities for the company is one of the ways to fulfil these ideas.

Besides, the guest is the founder of the Public Organization "Noosphere Association", a non-governmental and non-profit organization established for research and knowledge sharing. The Association supports several technology companies working in various fields of the digital economy and developing space technologies.

After the first acquaintance with the guests, the leaders of the individual areas the university works in and the heads of its institutes and faculties, who provide training for aviation and rocket science, had a communication with the guests. The Chairman of the Academic Council of the University, Director of the Institute of Telecommunication Systems Academician of the NAS of Ukraine Mykhaylo Ilchenko, Vice-Rector for Scientific Work Vitaliy Pasichnyk, Vice-Rector for International Relations Corresponding Member of the NAS of Ukraine Serhiy Sidorenko, Director of the Institute of Aerospace Research and Technology aerospace and missile engineering department of the Aerospace Technology Institute Vitaliy Sukhov, the member of Nanosatellite Developer Group of Igor Sikorsky Kyiv Polytechnic Institute, Senior Lecturer of the Department of Industrial Electronics of Faculty of Electronics Yevhen Kovalenko and others took part in the meeting.

Michael Zgurovskiy told the guests about the Innovative Ecosystem of Igor Sikorsky Kyiv Polytechnic Institute, the purpose of its creation, components and principles of activity, as well as about some projects implemented in this environment. In this context, the issues of protection of intellectual property rights for products created within the university walls by their staff and the necessity for the creation of new and clear rules in this field were raised. Igor Spodin told about the work and experience of the company in the field.

Mykhaylo Ilchenko made a short presentation of the space program of Igor Sikorsky Kyiv Polytechnic Institute. He focused on the PolyITAN university nanosatellite line more specifically, the first of which PolyITAN-1 has been in Earth orbit since 2014, the second - PolyITAN-2-SAU was launched in 2017 (it has already completed its mission), and the third, development and the compilation of which is being completed, and the fourth and fifth, the work on which is just beginning. Maxim Polyakov was particularly interested in the project of grouping microsatellites, which is also being worked on by university designers and researchers, the specialties of the payloads of these devices and the prospects for their use.

A separate block of the meeting was devoted to the issues of cooperation between companies and Igor Sikorsky Kyiv Polytechnic Institute in educational, scientific and technical fields. The fact is that this year, at the end of June, the University signed an agreement on cooperation with the Public Organization "Noosphere Association" and the Limited Liability Company "Firefly Airlines Ukraine", as well as Oles Honchar Dnipropetrovsk National University. Its purpose is to prepare high-quality qualified personnel for work in the space industry of Ukraine and, in particular, at the company "Firefly Aerospace Space Ukraine". Following the agreements on the cooperation of Igor Sikorsky Kyiv Polytechnic Institute with the Public Organization "Noosphere Association" and LLC "Firefly Aerospace Space Ukraine" within the Institute of Aerospace Technologies (IAT) of the University, a Training Center for Space Technologies was created. This center will operate on the principle of dual education. The Institute has already enrolled six first-year students in the dual education master's program in the specialty 134 "Aviation and Rocket Engineering". Future masters will combine training with work at the Center of Firefly Aerospace Space Ukraine, working on real projects to develop light rocket carriers that will deliver cargo into space. Maxim Polyakov, by the way, told the participants of the meeting that soon "Firefly Airlines Ukraine LLC" would have not only design and research units in Ukraine but also its production base, where future masters will also be able to work.

Ivan Korobko, director of the Institute, told about some organizational aspects of this work and the program according to which future masters will study, as well as the students who have entered the bachelor's degree of IAT. According to his words, now in cooperation with Public Organization "Noosphere Association" and LLC "Firefly Aerospace Space Ukraine" the development and coordination of the dual education program are completed, the issues of placement of students in Dnipro city are solved, the topics of master's theses are being prepared, jobs are being prepared in the relevant fields, heads of master's theses from partner organizations of the university are determined. Besides, the tasks assigned to the Space Science and Technology Training Center are not limited to the training field. These include academic mobility, participation in collaborative innovation projects, and youth career guidance.

Finally, the participants of the meeting agreed on further steps in the extremely dynamic cooperation.