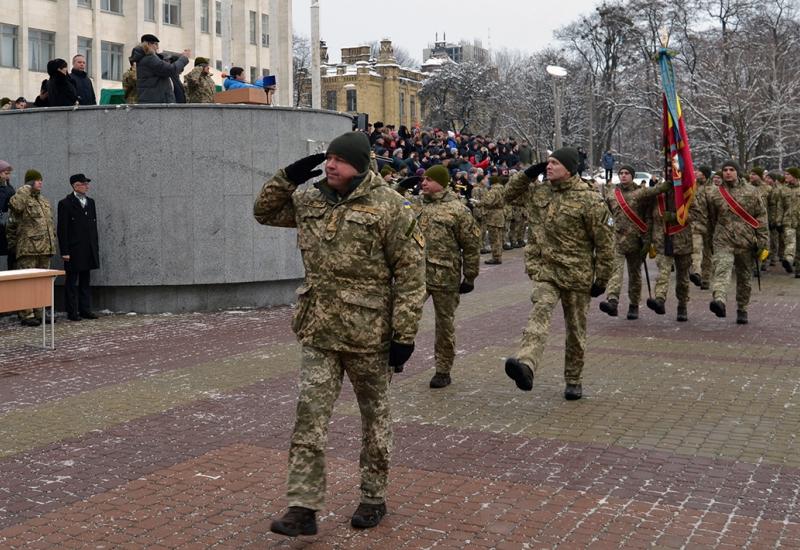 The celebrations of the graduation of the officers of the Institute of Special Communications and Information Protection of National Technic University of Ukraine ‘Igor Sikorsky Kyiv Polytechnic Institute’ occurred on the 22nd of December.

The Chairmans of State Service of Special Communications and Information Protection, of National Technic University of Ukraine ‘Igor Sikorsky Kyiv Polytechnic Institute’, the representatives of state and local governments, the ATF participants – Heroes of Ukraine and other respected guests took part in this commemorative event.

60 graduators were given Masters Degrees and first officers’ badges. The six of them were given honors degrees (one of them was admitted with a gold medal).

The Colonel Oleksandr Puchkov congratulated the personnel of the Institute with this event. He wished the graduators to serve our country honestly and selflessly and to be worthy heirs of spiritual values and successors of the rich military traditions of our ancestors.

The Chairman of State Service of Special Communications and Information Protection Lieutenant General Leonid Evdochenko also greeted the young lieutenants with this notable event. He wished the graduators of the Institute to be a model of faithful service to the homeland, high moral qualities, officer honor and responsibility.

The first Vice-Rector of Igor Sikorsky Kyiv Polytechnic Institute, the Academician of National Academy of Sciences of Ukraine Yury Yakymenko, People’s Deputy of Ukraine, the Chairman of the Committee of Verkhovna Rada of Ukraine on affairs of information and communications Oleksandr Danchenko, the President of the Association of graduators of Kyiv Polytechnic Institute Dmytro Andrievsky, The Chairman of Solomianskyi District Administration in Kyiv City Igor Dovban also acted with salutary words.

The graduators’ farewell with the Official Institute’s flag, which symbolizes the commencement of their service as officers, was a joyous moment.

The archpriest, the rector of the temple of St. John the Baptist Orthodox Church of Ukraine Pavlo Starodub blessed the young officers to independent life.

The ceremony of graduation finished on Personnel of the Institute passing a solemn march accompanied by the Honorary Guard Orchestra of a separate Presidential Regiment named after Bohdan Khmelnytsky.