Presidential scholarships for the cleverest and the smartest! 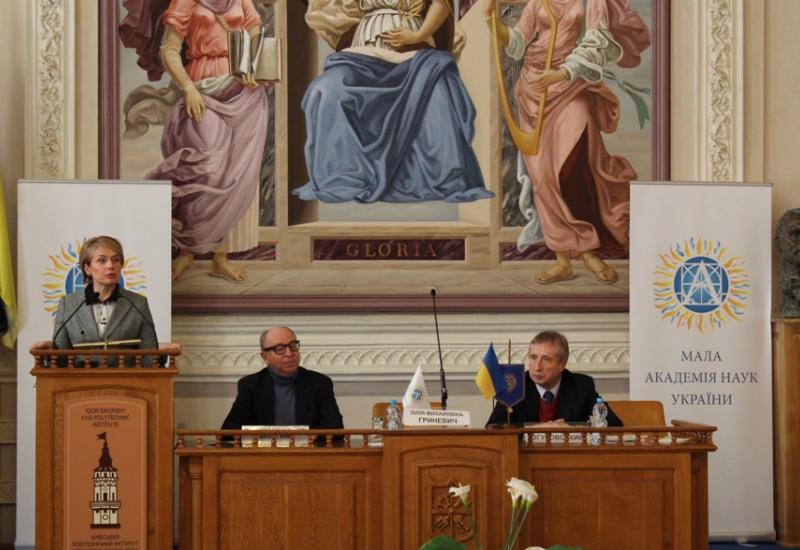 On November, 29, winners of the III stage of the All-Ukrainian competition for the protection of research works of students - members of the Small Academy of Sciences of Ukraine and IV stage of the All-Ukrainian student Olympiads on basic subjects were awarded the diplomas of laureates of the scholarship of the President of Ukraine in the Igor Sikorsky Kyiv Polytechnic Institute.

Diplomas and awards to young laureates were presented by Minister of Education and Science of Ukraine Liliia Grynevych. In addition, they were congratulated by the President of the Small Academy of Sciences, academician of the National Academy of Sciences of Ukraine Stanislav Dovgyi and others. Moreover, Yevhen Frunchko, the head of the First Kyiv Regional Directorate of PJSC “UkrSibbank”, presented a present from this bank to a pupil at a later time, and now a student of the first year of the Boris Grinchenko Kyiv Pedagogical University Danylo Chernenko, who took the 1st place in the Crimean Tatar Humanitarian section at the 3rd stage of the All-Ukrainian competition for the protection of research work of students - members of the Small Academy of Sciences of Ukraine.

“Realizing that you have a great chance to become the core of the country's construction, I want to give you a formula for success: the goal, correctly and successfully set for itself, multiplied by labor and perseverance, succeeds. And it does not happen otherwise, - said Liliia Grynevych. – Therefore, without doubting your talents, I want to wish you one thing: that you never lose the inspiration, perseverance and patience that is needed for a lot of work. And this will lead to success. And your success is Ukraine's success. This is our success!”

Scholarships of the President of Ukraine for their intellectual achievements will be received by two hundred seventy students and freshmen students. Moreover, as Liliia Grynevych noticed, thirty five of them won this reward a second time, and eight – the third time!

The first-year students of Ukrainian universities, who won their scholarship right in the status of senior pupils-members of the Small Academy of Sciences, were awarded by the Deputy Director of the State Research Institute “Institute for the Modernization of Educational Content” Yuriy Safonov and the leadership of the universities that they chose for further study. Some of them who joined the family of Kyiv Polytechnicians received their diplomas from the hands of the rector of the National Technical University “Igor Sikorsky Kyiv Polytechnic Insititute” Michael Zgurovskyi.

It should be added that perhaps the day of awarding diplomas will be remembered by the scholars as well as other interesting events planned by the organizers of the celebrations: a review of the exposition of the State Polytechnic Museum at Igor Sikorsky Kyiv Polytechnic Institute; the presentation of the popular Post It platform from its creators; acquaintance with the exhibition “Fate of the Twelve”, prepared for the 100th anniversary of the National Academy of Sciences of Ukraine, which is celebrated this month, and others.

On the photo: the Minister of Education and Science of Ukraine Liliya Grynevych