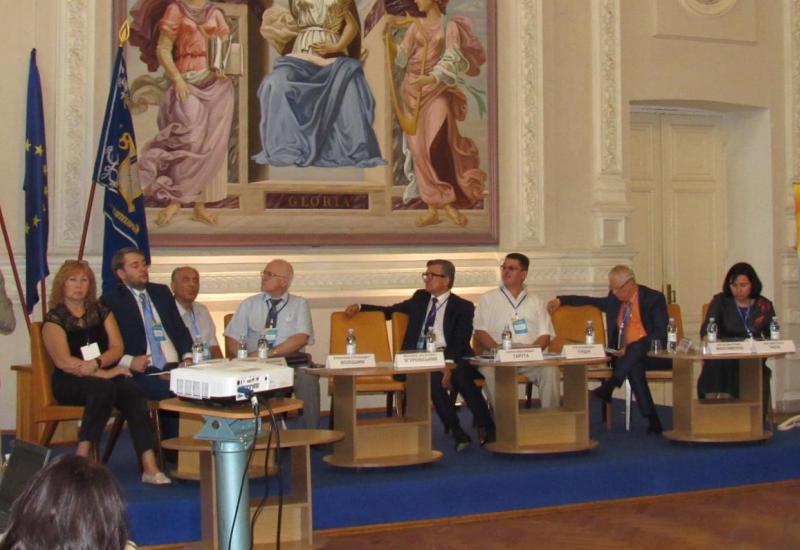 On June, 14 Igor Sikorsky KPI hosted the First National Forum “Ukraine 2030” in the Hall of Meetings of the Academic Council.

The participants were executives and scholars from leading Ukrainian universities, representatives of specialized government agencies and the public. The forum was the start of the second stage of discussion on how to implement the provisions of the Doctrine of balanced development “Ukraine 2030”, a strategic document proposing a fundamentally new trajectory for Ukraine's economic development until 2030. Implementing this trajectory will allow Ukraine's GDP growth to reach 710-750 billion US dollars by 2030.

The first presentation of the Doctrine took place in spring of 2017, and over the course of more than twelve months the developers acquainted scholars, entrepreneurs, experts, public activists and all non-indifferent citizens of our country with its provisions. The first stage of the comprehensive discussion of the Doctrine is now complete. According to his results, the compendium “Ukraine 2030: Consolidation of Thought - Consolidation of Actions” was published, which was received by all the Forum's participants. The compendium contains analytical materials and suggestions on possible options for their solutions, provided by scientists from practically all regions of Ukraine. The next step is to combine the scientific and practical efforts of the doctrine team with the most active part of Ukrainian entrepreneurs and united territorial communities of Ukraine. Therefore, the main purpose of the Forum was to create conditions and a platform for the consolidation of scientific and business communities around the ideas of building a prosperous Ukraine based on the internal intellectual potential of Ukrainians.

The report “Foresight 2018: General regularities of systemic world conflicts of the beginning of the 21st century and their impact on the economy and society” was opened by the rector of the KPI, Academician of the National Academy of Sciences of Ukraine Michael Zgurovskyi. The report was based on the materials of the Foresight of Ukraine's Economy for Medium-Term (by 2020) and Long-Term (up to 2030) Time Horizons, carried out under his leadership by a group of scientists from the World Data Center for Geoinformatics and Sustainable Development of the International Council for Science (ICSU) under the Igor Sikorsky KPI and Institute for Applied Systems Analysis of Igor Sikorsky KPI and the National Academy of Sciences of Ukraine. This is the fourth Foresight, made by the researchers (the first one in 2008, the second in 2015, and the third in 2016), and it was devoted not only to the issues of purely economic, but also to the study of factors that influence the development of the country's economic complex, factors, without which it is impossible to build an effective model of functioning and development of the state. Among the main goals he highlighted that the factor of human development is especially important given that in the current conditions, it is human capital that can become the main driver and catalyst for the economic growth of the national economy of Ukraine. Nevertheless, in general, rather gloomy circumstances in which our country has appeared, there have been some positive tendencies in the life of Ukraine. This is explained, first of all, by a series of institutional changes. Let them not be fully worked out yet, but, according to Michael Zgurovskyi, they have already begun to reorient the vectors of socio-economic development of the country in the desired directions.

One of the most notable the presentation on this panel (and in general at the Forum) was the one of the well-known Ukrainian industrialist, founder of the Industrial Union of Donbass, co-author of the Doctrine of balanced development “Ukraine 2030” Sergii Taruta. It was devoted to the fundamental issues of the functioning of the state, although the topic of the report was formulated in some general terms – “The social contract: framework rules for interaction in society”, - the speaker broke issues in it, which are quite specific, especially important for Ukraine at the present stage of its development. In particular, in his opinion, the procedure for adopting the Constitution should be changed: it should be adopted not by the Supreme Council of Ukraine, but by the Constitutional Assembly formed from authoritative representatives of all regions of the country.

Actually, there were no random or “passable” reports at the Forum. It is enough to mention that among the speakers there were such respected scholars, businessmen and public figures as the director of the G.S. Kostiuk Institute of Psychology, academician of the National Academy of Pedagogical Sciences of Ukraine Sergiy Maksymenko (topic of the report “Psychological regularities of collisions of standards with the novelty of personality, both source and motive the force of progress”), rector of Pryazov State Technical University (Mariupol) Vyacheslav Voloshin (“Concept of scientific and educational potential of Donbass as a precondition for its reintegration in Ukraine within the framework of the strategy “Ukraine-2030”), Head of the Department of Management and Business of Semen Kuznets Kharkiv National University of Economics Tetyana Lepeyko (“Features of manifestation of the theory of generations” in modern Ukraine”), president of the hi-tech holding company KM CORE, founder of the network cluster high technologies “BORSCH ventures”, co-founder of the GogolFEST festival and the MasterClass House Eugene Utkin (“Capitalization of ideas: creative economic development”), Strategic Communications and Development Expert, Vice-President of the All-Ukrainian Public Relations League Alina Sevastyuk (“The Impact of Global Trends on the Development of the Countries of the World and the Possibilities of Ukraine in the Digital Age”) and many others. In total, at the Forum, more than 20 speakers spoke at the Forum with their thoughts on the main provisions of the Doctrine and their introduction into life – representatives of Igor Sikorsky KPI, Institute of Sociology of the National Academy of Sciences of Ukraine, National Contact Point of Ukraine, Horizon 2020, Kyiv National University, Kyiv-Mohyla Academy and Ostroh Academy, Institute for Sustainable Development at the Western Scientific Center of the National Academy of Sciences of Ukraine and the Ministry of Education and Science of Ukraine, Ivano-Frankivsk National Technical University of Oil and Gas, KPI Startup School “Sikorsky Challenge”, National Technical University “Kharkiv Polytechnic Institute”, Uzhhorod National University, Vinnitsa and Kherson national technical universities, Odessa National Economic Universities etc.

The final document of the Forum was a draft resolution, which identified the main risks of the existence for independent Ukraine, mechanisms for ensuring its innovative development, the primary actions to ensure that the country's economy came out of stagnation, key goals and objectives for power structures, businesses and citizens, as well as planned international indexes, which will control the results. The resolution will be further elaborated with comments and suggestions from the participants, and next week it will be made public on the Ukraine2030.org Communication Platform (https://www.ukraine2030.org/), which was also presented at the Forum.

In the photo: Michael Zgurovskyi speaks to the Forum participants