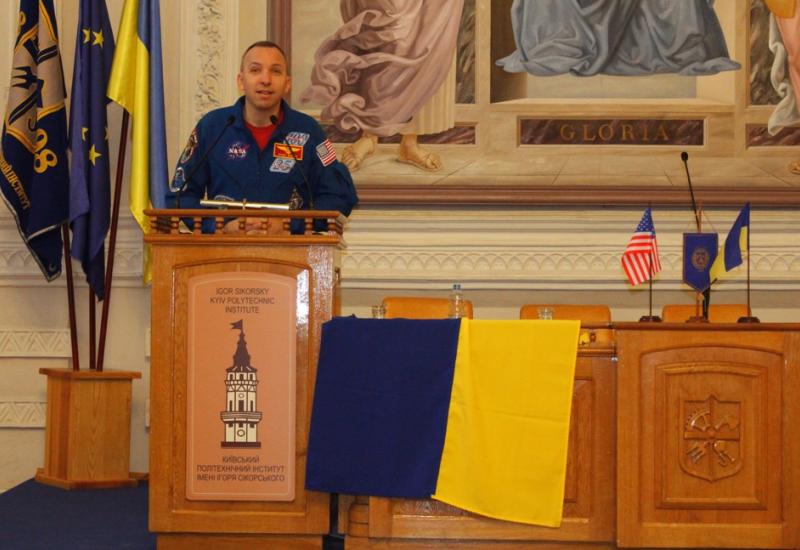 NASA astronaut, Colonel of the US Air Forces James Bresnik (Randy "Komrade" Bresnik) was born on September 11, 1967 in Fort Knox, Kentucky. In 1997 he devoted his life to space. Since then, he has made two space flights: from November 16 to 27, 2009, as an “STS-129” mission specialist on board  of the Atlantis shuttle, and from July 28 to December 14, 2017, as a flight engineer of Soyuz “MS-05” spacecraft crew, a flight engineer of “MKS-52” mission and a commander of the mission of the International Space Station "MKS-53".

During his second flight into space, on October 25, 2017, James Breznik took part in a direct contact with visitors to the American House in Kyiv via Skype. James Bresnik spoke with Ukrainians with the Ukrainian flag in the background, which he deployed on board of a spacecraft. Thus, he became the second astronaut after Leonid Kadeniuk the honorable place in whose space luggage belonged to the flag of our country. When asked why the Ukrainian flag was taken with him on a journey to the stars, the astronaut said that this was a symbol of his son's homeland - in 2008, Berezniks’ couple adopted a little Ukrainian boy - and this flag he received in 2016 in Dnipro during a trip to Ukraine. In 2009, his daughter was born.

By the way, his current visit to Ukraine was begun with a visit to Dnipro and from there he came to Kyiv. And he visited the National Technical University of Ukraine "Igor Sikorsky Kyiv Polytechnic Institute" with his son Wayet.

During a meeting with the students James Breznik told them about preparations for the flight, work and life at the orbital station. And not only on it, because during his two expeditions to orbit he made several exits to the open space. The astronaut illustrated his story with extremely interesting photographs and video clips of the training sessions of the international team of astronauts underground and under water, portraits of the crew on board, demonstration of the laws of mechanics in weightlessness, amazing and sometimes bizarre landscapes of the Earth from outer space, etc. Finally, the American astronaut responded to the questions of the meeting participants.

In the photo: James Breznik speaks in the Hall of Meetings of the Academic Council of Igor Sikorsky Kyiv Polytechnic Institute. On the table next to him there is the flag of Ukraine, which visited the space orbit.