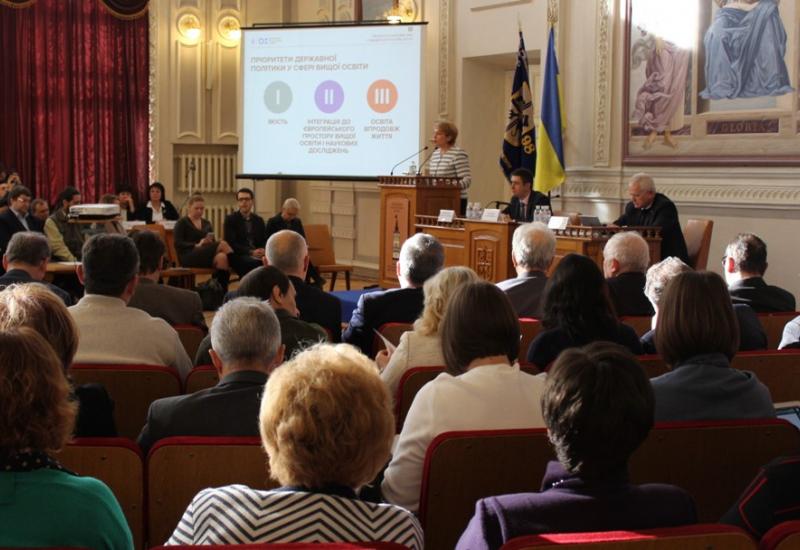 January 26 in Igor Sikorskiy KPI was held an expanded meeting of the College of the Ministry of Education and Science of Ukraine.

The Vice Prime Minister of Ukraine Vyacheslav Kyrylenko, First Deputy Chairman of the Verkhovna Rada of Ukraine Committee on Science and Education Oleksandr Spivakovsky, representatives of Central Executive Authorities of Ukraine, rectors of higher educational institutions of Ukraine, heads of public organizations, who work in the field of education, academics, experts and others took part in it.

"I wish all of us together were able to hold a constructive discussion on concrete plans for the development of national education for 2017-2019," Lilia Grinevich, Minister of Education and Science of Ukraine, stressed at the beginning of the meeting.

"It is extremely important for our state to change the priorities of economic development and society. The development of human capital, which, in fact, will solve all the problems we face, should be included as the main priorities" said rector of KPI an Academician of the National Academy of Sciences of Ukraine, Mikhail Zgurovsky, welcoming the participants of the meeting. "Our country may come out of the difficult situation in which it is, precisely because of the development of human capital".

Vyacheslav Kyrylenko also addressed the participants of the expanded session of the Collegium of the Ministry of Education and Science. "You know that the Government practically does not hold any meeting, which would not discuss the issue of education, including higher education. There are practically no meetings at any kind of profile minister or other members of the Government or the Prime Minister, who takes care of these issues in person, would not violate the educational issues and did not make appropriate decisions. This is a strategic position of the Government ", - reminded in his welcoming speech Vice Prime Minister of Ukraine.

"The main tasks facing educators and scientists of higher education in Ukraine, as well as the problems faced by higher education today, and the main ways of their solution, were described in the report "On Priority Areas of Changes in Higher Education for 2018 - 2019" Minister of Education and Science of Ukraine Lilia Grinevich.

The report of First Deputy Minister Volodymyr Kovtunents "On Reforming Finance and Economic Relations in the Field of Higher Education" was devoted to new financial mechanisms for ensuring the activities of Ukrainian universities and those innovations that will be implemented in the near future.

Deputy Minister Yuriy Rashkevich spoke with the report "On the draft Concept of training specialists for the dual form of education".

The President of the Union of Rectors of higher bulk establishments of Ukraine, Leonid Gubersky, the rector of the Kyiv National Taras Shevchenko University, rectors of several leading Ukrainian universities and representatives of the National Team of Experts on Higher Education Reform, took part in the discussion of the agenda.

According to the results of the Collegium meeting, its members made a decision, which determined the list of priority tasks to be performed by the Department of Higher Education together with other structural subdivisions of the Ministry of Education and Science of Ukraine. Among them is the development of a draft National Higher Education Development Strategy (by 2025), which the Ministry's experts should develop in cooperation with the Institute of Educational Analysis and the National Academy of Pedagogical Sciences of Ukraine.

On the photo: Lilia Grinevich, Minister of Education and Science of Ukraine.