Concerning one publication on the website of Radio Liberty 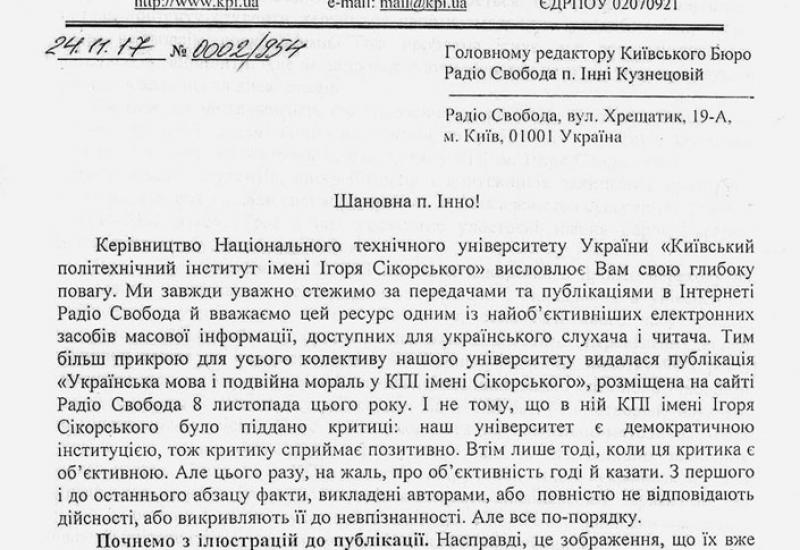 In the beginning of November the article "Ukrainian language and double morality in the KPI Igor Sikorsky" was published on the website of Radio Svoboda. This material, from our point of view, treats the question of the University's transition to teaching in Ukrainian language and the implementation of the requirements of the legislation on decommunization. Therefore, a letter was sent to the head of the Kyiv bureau of Radio Svoboda Inna Kuznetsova requesting to confute the information provided on the site. The accusations made in the article relate to the entire staff of the university, so we publish this letter for general review.

To editor-in-chief of the Kyiv Bureau of Radio Liberty

The leadership of the National Technical University of Ukraine "Igor Sikorsky Kyiv Polytechnic Institute" expresses you deep respect. We always closely follow the radio broadcasts and publications on the Internet and consider this resource one of the most objective electronic media available for the Ukrainian listener and reader. That’s why for the whole staff of our university was annoyed after the publication "Ukrainian language and dual morals in the KPI named after Igor Sikorsky" published on the website of Radio Liberty on November 8 this year. And not because of KPI Igor Sikorsky being criticized there: our university is a democratic institution, therefore, it accepts criticism positively. However, only when this criticism is objective. But this time, unfortunately, there is nothing to be said about objectiveness. From the first and to the last paragraph, the facts set forth by the authors, either completely do not correspond to reality, or distort it to unrecognizable. But let us explain everything in order.

Let's start with the illustrations to the publication. In fact, this image couldn’t be seen for more than two years in KPI. These are the paintings of the corridors in energetics wing of the main academic building. More precisely, one of the fragments of paintings devoted to the history of energetics. Great scientists have made a significant contribution to the development of physics and energetic in the 70's of the last century. The fragment with the figure of Lenin was devoted to the GOELRO Plan. After in 2015 the Decommunization Laws came into effect, this fragment was closed by a special screen. So now it's impossible to see it. We couldn’t let them vanish from the wall as they are the real artifacts of the past and the best place for them is in the Museum of totalitarian art, which has long been planned to be set up in Kiev. Then this fresco can be moved there. So, such an illustrative series is a real defamation.

With the regard to KPI Radio. In fact, this is not an FM station, as it was claimed by the authors of the publication, but a broadcaster that distributes its broadcasts in a closed-loop network. The students themselves work there. There are quite a lot of programs, not only musical, but also cultural, devoted to the course of life at the university, and others. These are Ukrainian-language programs, therefore, to state that "the state language of the NTUU KPI in the extracurricular life is completely absent ", as the authors of the article do is completely wrong. Moreover, the editorial board meets the requirements of Art. 9 of the Law "On Television and Radio Broadcasting" in the part of the broadcasting of the state language in the amount of at least 60% of the daily volume of broadcasting. Although, it is worth mentioning that according to Art. 2 of the same Law, its norms for the operation of closed-loop wired networks, such as the KPI Radio, are not applicable. However, when solving content issues, students are guided by their taste preferences, often not quite perfect. So the problem is, we know about it and try to solve it without imposing a rigid censorship, but organizing the training of hosts and disc jockeys.

We can not but point out that the education of patriotism is not limited to language only. This is also the real actions of teachers, co-workers and students. A vivid illustration of how they will deal with this in the KPI Igor Sikorsky, is that ten of our students, employees and graduates gave their lives in the war for independence and sovereignty of Ukraine in 2014-2017. Three of them were posthumously awarded the title of Hero of Ukraine. Most of them were volunteers ...

About the language of teaching. In KPI Igor Sikorsky, the process of transition to teaching in the Ukrainian language has long been completed, and teaching at the university is carried out in Ukrainian. Moreover, the KPI itself has perhaps made the largest contribution from all technical universities to the transfer of technical education to Ukrainian. After all, in the beginning of the 90s of the last century we did not have any educational, methodological, or terminological basis for teaching technical sciences in Ukrainian. On our base a scientific terminological code was created. This teaching-methodical base was created in the Ukrainian language, which is now used by our colleagues in other technical universities. Teachers of the KPI issue textbooks only in Ukrainian or in English (we have 250 courses in English). Note that only in the last 5 years, KPI scientists wrote and published over 250 textbooks in our university publishing house.

As for the assertion, that the head of the teaching-methodical department does not speak the state language at all, but it does not correspond to reality. The point is that the scope of his duties includes the preparation of methodological documents, which in the KPI Igor Sikorsky are given exclusively in Ukrainian. Therefore, in his professional activities, he uses the state language, and in personal communication is bilingual.

As for the study of foreign students. It is currently being run in three languages: English, Ukrainian and Russian. The choice of language is done by the foreign students themselves. Today only about 30% of them study in Russian. Gradually, this teaching is translated into English as the only language of instruction for foreign students. And now 50% of the students of the preparatory courses are studying in English.

Well, finally, in KPI in 90’s of the last century, all conditions for the transition to teaching in Ukrainian were created. The key role in this process was played by the Department of Ukrainian Language, Literature and Culture. That chair, on which until May this month for a quarter of the rate worked Irina Kostenko - one of the authors of the article. Therefore, she does not know all about it, and when she worked at us, the language situation at the university was quite suited to her. However, in May, the validity of her contract expired, and the department did not recommend her election for a new term based on the results of her professional activity. Therefore, in our opinion, the lines that she wrote about our university are, to a certain extent, dictated by personal insult. And this article is one of the ways to reduce the bill, especially since it was not preparing in early November, but in the summer, shortly after its release. Therefore, if we talk about "double morality", then we should not ignore this fact. Moreover, if you refer to the Professional Code of Journalists of the RVE / RS, the excerpts from which are placed on the website of Radio Liberty, then the motives of the author do not meet the requirements of at least two of their sections - "Impartiality" and "Ethics".

To sum it up, we ask that you further confute the above-mentioned facts, confute the publication "Ukrainian language and dual morale in the KPI named after Sikorsky" on the site of Radio Svoboda, remove it from your information sources and apologize to the thousands of students of KPI.

With respect to you and the team of journalists led by you,