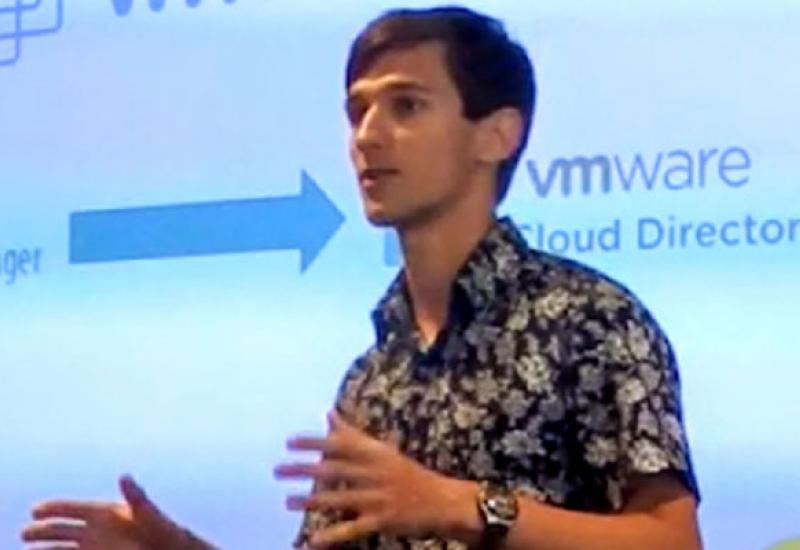 Mykyta Savchenko, student of the 6th year of Faculty of heat power engineering (TEF): "I always aspire to create something new and unusual"

At the age of 22, the student of the 6th year of Faculty of heat power engineering (specialization - "Software Engineering"), Mykyta Savchenko achieved remarkable success both in studying and in software engineering, and also in gaining experience in teaching. According to him, for students who choose software engineering a lot of opportunities and ways to the future world unfold even from the first year of studying.

At the request of the editorial office of "KP" Mykyta Savchenko shared his experience in IT, internship abroad while studying at Igor Sikorsky KPI, and his interactive form of teaching.

- Before joining the KPI, during my studying at school I was engaged in the development of computer games for three years, from the editing game levels in various games to the creation of my own programming languages ​​GML and LUA. These lessons gave me the opportunity to create something new and unusual, which I always sought.

During the first year of the university, the teacher Olexander Kriachok suggested that I try to take an internship test at InterSystems corporation, according to the relevant announcement on the Internet. This was the beginning of my true career in IT. When composing a CV, I included everything I could - names of my projects, games, developed websites, term papers, their short description, etc. In my opinion, it was the reason why I was paid attention. I did some general and technical tests on the corporation's web portal. After that, they called me, asked some questions about me and about my projects. Then there was another call - for a technical interview, and finally - the third, when I was invited to an internship in Moscow in the summer of 2013.

During a technical interview, I did not answer a few highly specialized questions. I replied: "I did not have any experience with this, but if I need to, I will sort it out." Instead, there were no problems with the general issues that were intended to determine whether I really had an idea of ​​how to write programs, because I had a lot of my own projects, and thanks to them I was versed in things I was asked.

Three months of internship in the summer were exciting. I broadened my horizons, began to understand the processes taking place in the world, realized how the business was organized, what an adult life looks like, and why it's just like that, and not otherwise. Everyone who I have communicated and lived with, brought something into my life, just as I did in theirs. I think that new impressions are extremely important, especially in student years.

InterSystems Corporation develops a multimodal, post-relational database management system (DBMS) Caché and products based on it. Their software suite is mostly for government agencies, medicine and business. The technologies of the corporation are used globally, and in particular, at state enterprises of Ukraine. InterSystems takes up a significant proportion of the US and European market in medicine and health by providing its data platform for high-volume systems and high-risk systems.

During the summer internship, I worked with two technologies - the web and the Caché DBMS with its very specific programming language - Caché ObjectScript. After the first three weeks of training I was working on internal projects of the corporation and I developed my own project - Caché WebTerminal - the access terminal to the DBMS through the web interface. This was my first and most significant project, and now Caché WebTerminal is used by companies around the world.

In 2015, I was invited to a summer internship to the headquarters of InterSystems in the US, in Cambridge, Massachusetts. Three months in the United States have become one of the brightest events in my life. InterSystems office occupies 8 floors of a multistory building, which also houses the Microsoft office, and Google is also just several buildings away. To put it shortly, it was the center of the computer universe. Internship was diverse: apart from working with a partner over the company's internal project, we, 25 interns, walked around the city, played bowling, visited baseball matches, rode kayaks and even went away for the weekend to Cape Cod Island, which offers a fantastic view on the Atlantic Ocean. The summer time seem carefree and simple, because I knew my job well, and all travel expenses were covered by the corporation, including compensation for accommodation and transport.

All good things said about the USA are true. I really liked Boston and Cambridge. Clean streets without any advertizing, "Street Bunnies", amiable and very sensitive people, a special atmosphere. I also went to New York, I can say that it’s different, big, noisy and sometimes dirty city, but with its special and lively atmosphere. In general, I saw the States as a completely different world, not similar to either the European one or the Ukrainian one, and, it should be noted, with a lot of perspectives.

Shortly after I returned to my homeland, I was contacted by an American author of a series of InterSystems books Paul Mike Kedau. In the letter, he wrote that he was impressed by the projects I developed for InterSystems Corporation, and would like to include information about me and my projects in his next book. I agreed to write a section on my projects. Later, the book was published in the United States, and Mike sent me a copy of it.

One of the interesting moments in my life was the first teaching experience when, in the 2nd year of training, my friends and I set up our own open web school at our university. Each of us already had some experience in the web and we wanted to share it. Having received more than 400 applications, we selected four groups of 30 participants. The classes lasted four months, twice a week after classes at university. For my group, I developed a course program using the technologies of HTML, CSS, JavaScript (web) + NodeJS, MongoDB. My friends taught mostly web and PHP + MySQL. I taught with inspiration, I liked it. I did not read simple "boring" lectures, but I made my course interactive, with a common practice in classrooms and homework, which I regularly checked. At the classes I shared my own experience, as well as that that I received abroad. The course was very interesting for me and for students.

When I told about my teaching experience at InterSystems, I was offered to conduct a course on their technologies in Kyiv for the State Enterprise "State Information Resource". Since then I have taught several more times in our country as well as abroad - twice for students of the Technological University in Brno in the Czech Republic and once in India for teachers at the largest private university of Amity University in Noida, Delhi. Thus, teaching has given me the opportunity of not only doing my business, but also travelling.

I would like to give some advice those who are still studying.

1. Do not trust any advice thoughtlessly, even mine :). It is important to understand that experience is unique to everyone, and it closely connected to time and circumstances. The way you see your future does not necessarily have to match someone's perception of it. The only thing it should exactly respond to is healthy logic and time.

2. As long as you are a student, you have the greatest number of opportunities. Use them to the full! Volunteer initiatives, internships, various activities - do not overlook them if you want to succeed in the future.

3. Learn for your goal. If the goal is to work in a company or corporation, do only those things which will contribute to achieving this goal. For instance, things that should be reflected in your resume. Or things that will help you develop in this area. In IT - write your own or collective projects, open source libraries, etc. - this will not be useless.

4. Every day, find time for self-improvement and your own projects. For really important things there must be time and motivation. If there is no time - review what you spend it on, and find the reserves. Keep in mind that rest also takes time - nothing in your schedule should suffer. If there is no motivation, talk with people and try to imagine your future in detail - this will allow you to see the right path to your development.

5. Spend a summer or a vacation with real benefits. One of the best opportunities to do this is internships abroad. To do this, you do not have to be a genius - you just need to know any programming language, basic knowledge of algorithms and data structures, have sufficient motivation to send a resume and prepare for an interview. The sooner you go out into the world, the more ways you’ll find and the broader your horizons will be. Keep in mind that corporations, such as Google, are starting to recruit trainees for the summer from September of the previous year, and all available places are being taken literally in the first week after the announcement of admission to the internship. Therefore, be prepared for this.

6. Learn foreign language. Watch videos in English, read English, speak English with your friends every day - do everything in order to feel comfortable when you suddenly get a call from abroad!

I would be happy to answer everyone who wants to contact me. My e-mail: zitros.lab+edu[at]gmail.com.