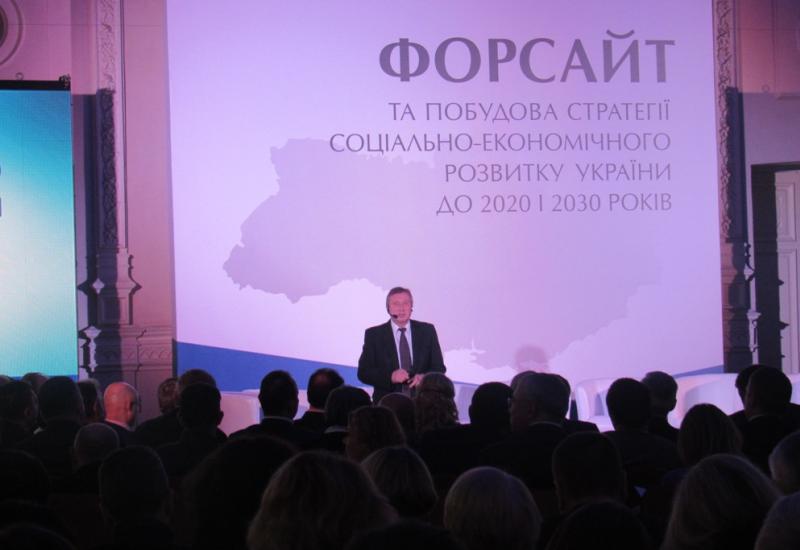 The forum "Foresight and construction of strategy for socio-economic development of Ukraine in the medium (2020) and long term (2030) time horizons" was held at Igor Sikorsky KPI on 17 November.

A presentation "Foresight of socio-economic development of Ukraine in the medium (2020) and long term (2030) time horizons" was made for participants of the forum.

It should be mentioned that foresight (in English a look into the future, predicting) is a large-scale study of a socioeconomic segment of society to reform it in the desired direction, assessment of human capital which is able to make the necessary changes, and actions of the government in the medium and long term prospective, etc. Such research is used for strategic planning in many developed countries, including Canada, Japan, Germany, France, Belgium. For others - and these are now successful countries such as Singapore, South Africa, Israel, etc. - they have become a tool to build an effective strategy for overcoming the crisis. Governments of many countries annually allocate funding to conduct and update such research. Unfortunately, Ukrainian authorities have not considered foresight as an effective tool in shaping strategy development yet. Instead, scientists and businessmen are confident that Foresight of socio-economic development of Ukraine will enable us to look correctly in the future and create more effective future actions.

Foresight for Ukraine was performed by scientists from World Data Center for Geoinformatics and Sustainable Development of the International Council for Science (ICSU) at the National Technical University of Ukraine "Igor Sikorsky Kyiv Polytechnic Institute" and Institute for Applied System Analysis of NTUU "Igor Sikorsky KPI" of MES and NAS of Ukraine in order of the Foundation "Agrarian superpower".

This is the third Foresight held within the walls of the National Technical University of Ukraine "Igor Sikorsky Kyiv Polytechnic  Institute" (we reported about the previous earlier - see http://kpi.ua/15-10-31, http://kpi.ua/15-11-12, http://kpi.ua/15-12-09-forum). Fifty experts and over forty mathematicians, programmers and other professionals took part in the work on it. New research greatly enhances the previous results, particularly within it scientists have assessed the presence of the country's human capital which is able to make positive changes, offered fifty major actions of the government in the form of socioeconomic development of Ukraine in the medium and long term, and so on.

Officials of the government, people deputies of Ukraine, scientists, NGO leaders and businessmen took part in the discussion. That is representatives of those structures on which depend the ways our country will choose heading in the future.

The research is devoted to foresight, rather than the forecast of the Ukrainian economy, because, as already explained repeatedly supervisor of the research team, Rector of NTUU "Igor Sikorsky KPI" Academician of NAS of Ukraine, Mykhailo Zgurovskyi, in a situation when the country is experiencing a period of breaking the old socioeconomic system, common forecasting methods can not be used - mechanical transferring of the tendencies of the past for the future can not give a satisfactory result. Therefore, it is necessary to use other methods - foresight methods or prediction. They can help to imagine a future that can not be interpreted as a simple continuation of the past, as it gets radically new content, form and structure.

Mykhailo Zgurovskyi and founder of the Foundation "Agrarian superpower" Andrii Gordiichuk presented Foresight to Ukraine. The meeting was moderated by a diplomat and a prominent social activist Oleksandr Chalyi.

Researchers have identified five main factors that hamper the development of Ukrainian economy (shadow economy, whose share is 47%), large-scale corruption (13.1% of GDP), the pension burden on the budget (7.5% of GDP), public service debt (7.4% of GDP) and very high energy intensity of GDP, which is 3-5 times more than the energy intensity of GDP of developed countries.

Even more important was to determine the drivers or clusters able to bring the national economy on track. Chief among these are the agricultural sector; the military-industrial complex; information and communication technologies; creating new substances and materials, nanotechnologies; new energy; high-tech engineering and instrumentation; development of transit infrastructure; development of the human sciences, biomedical engineering, cellular medicine and pharmacy; tourism.

The presentation showed eight possible scenarios of development of Ukraine. According to the study, the probability of a positive scenario of 2030 is only 3%. However, as mentioned above, scientists have determined the sequence of the authorities and society needed to prevent the realisation of negative scenarios. And primary actions must first minimize the inhibitory factors - corruption and the shadow economy, intensify drivers of the Ukrainian economy.

"Foresight can be an effective tool for designing the future of our country, as in other countries, - Mykhailo Zgurovskyi said. - It can be used by people who make decisions at the state level, institutions of civil society and international organisations to develop sound policy and structural development plans for Ukraine".

Provided that steps offered in Foresight are executed appropriately, making corresponding actions of authorities and their public support, Ukraine will join the group of countries that follow the path of accelerated development.

"Today Ukraine must radically reconsider its position in the geopolitical and economic space, its own model of socio-economic development and humanitarian policy. A state of shock which appeared in Ukrainian society provides a unique opportunity to difficult but urgent conversion to the only possible European model of development ", Andrii Gordiichuk said.

However, not only members of the panel discussion but also experts, scientists, representatives of public organisations and businesses from the audience took part in the discussion so it was quite sharp and professional.

During the debriefing, Sergii Taruta admitted: "It is important that Foresight is permanent, and that it is updated to make it, including our government, one of the main instruments used in the development of new programs". Then he offered to take the appropriate appeal to the government.

The meeting adopted the following declaration.

We, the participants of the Forum "Foresight and construction of strategy for socio-economic development of Ukraine in the medium (2020) and long term (2030) time horizons," in the view of rapid social changes in the country and violent events on the geopolitical map of the world, decided to create a permanent open platform on the basis of Foresight which will include representatives from science, business, government and civil society.

The platform should become a nationwide basis for developing a strategy for the medium and long term perspective. The main goal is achieving of high socio-economic development of Ukraine, namely:

to achieve sustainability of Ukrainian society in social, economic and environmental dimensions in the medium term (2020);

to ensure Ukraine's GDP growth of at least 2 times and bring it to $ 400-500 billion while maintaining the stability of the social and cultural systems and the viability of the biosphere and its own capacity to self-renewal during close-in decade;

to switch to sustainable development when a properly planned strategic application of knowledge, science and technology will create a generation of Ukrainians who will lead the country to the forefront among the countries of Central and Eastern Europe in the long term perspective (in the time interval 2020 - 2030).

Our goal is to provide the use of Foresight as a systematic methodology of scenario planning of social and economic development, to establish a direct link between the priority sectors of the economy, science, business, government, civil society and build a prosperous country with great potential.