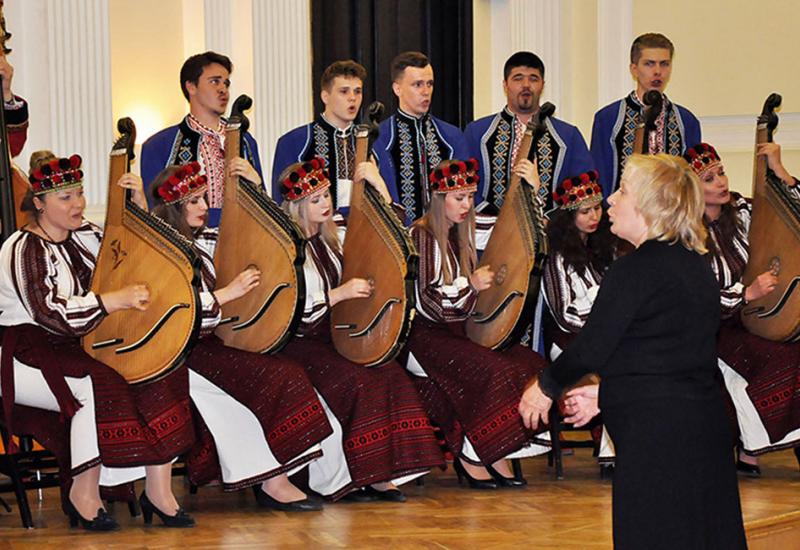 On the last day of May, 2016 in the small auditorium of the Warsaw University of Technology bandura players from ‘KPI’ played to remind people the nostalgia of Ukrainian prairies.

The 90th edition of Great Music, held in the Small assembly hall, was another event within the musical festival, which is an essential part of the cultural picture of Warsaw Polytechnic. Prof. Andrzej Jakubiak, who is the initiator and inspirator of this event, welcomed the guests with his introductory speech in which he recalled the common origins of both educational institutions: the Warsaw University of Technology and the Kiev Polytechnic Institute established by the decree of Tsar Nicholas II. The third university, established by virtue of this decree, was the St. Petersburg Polytechnic. Bandura players, led by Valentina Rudenko, performed Ukrainian folk songs, including "Ivanku, Ivanku" as well as popular Polish song "Hej, sokoły." The concert also included musical works from around the world (Armenia, Bulgaria, Spain, and Portugal) and solo performances of charismatic young musicians. It was a great surprise to hear the rock music hits, including ‘It's My Life’ by Bon Jovi and ‘Nothing Else Matters’ by "Metallica", played on banduras.

The impressions of the chapel member

We had been studiously preparing for a long time for our performance in in the Warsaw University of Technology. Everyone wanted to present not only our Chapel and University, but also Ukraine. Everyone flew to rehearsals and postponed his affairs for collective success.
Our first impressions of the trip exceeded our expectations. After crossing the border of Poland, we were thrilled with the architecture and the scenery during our trip. In the Warsaw University of Technology we had a warm welcome. Accommodations in the hostel, where we lived, can be called luxurious.
Every day they organized the excursions in Warsaw for us. We walked all by ourselves in the evenings. Those tours gave a chance for us not only to see the city, but also to feel its unique spirit. But also we had intense rehearsals every evening.
The concert took place in the evening of the fourth day. We strained every sinew and felt that the audience was fascinated by our work.

There were very moving and sincere acknowledgements after the speech, with which we were deeply touched.

We are very pleased that we have performed before a great audience and have shown to the Poles the Ukrainian art. We will always remember this trip and the people, which have already become our friends despite the language barrier.

On behalf of all the choir I would like to thank everyone, who helped us in this project - employees of Ukrainian-Polish Center "KPI", Department of International Relations and Protocol Department, Center of Culture and Arts, and our Trade union Head Valentyna A. Rudenko . Owing to her perseverance, diligence and professionalism we had a great opportunity not only to go abroad, but also to demonstrate our skills to Polish friends.

Irina Kolchar, student of VPI
Photo from https://www.biuletyn.pw.edu.pl, Photo: Chapel of Bandura-Players of “KPI” performs at at Warsaw Polytechnic. Conducted by V.Rudenko