Conference of students and young scientists at the FMF 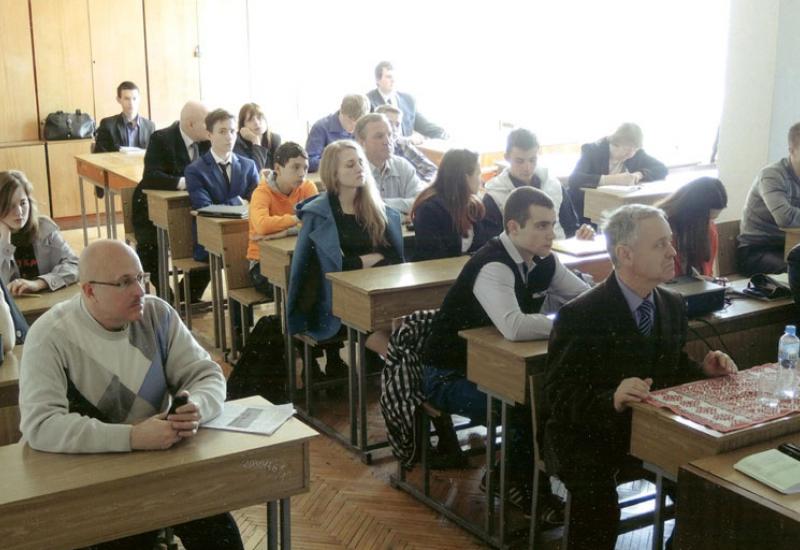 In konferentsiyiyi was attended by 38 students, 16 graduate students, 24 PhD, 13 doctors and 11 senior lecturers from various faculties and institutes "KPI" and representatives of seven universities in Ukraine. As a result of conference abstracts published a collection, which included 64 publications.

More than half of the participants - students of first year engineering training areas of different faculties and institutes "KPI": IHF, MMI, IMD, VPI and others. The conference attracted considerable interest because for many it was the first in a life science event in which they participated.

The conference was opened dean of Physics and Mathematics KPI prof. V.V.Vanin. He stressed that knowledge, intelligence and perseverance participants in finding solutions to scientific, technical and economic problems of modern society - the key to the further development of our country.

Among the papers that presented the Kiev Polytechnic worth noting an interesting report authors group consisting of Ph.D. O.S.Kolosova, Ph.D. H.A.Virchenko, and GI O.P.Kolosovoyi Virchenko on "Methodological approach to design and process design effective technical means to obtain compositional reaktoplastychnyh fibrous materials based on structural and parametric modeling." Innovative and informative report was also a Ph.D. VP Lukavenka and student MMI D.V.Kovalchuka "The use of computer technology to modernize research laboratory setup with electromagnet brakes" in which the authors examined the modernization of the laboratory model studies shoe brake with an electromagnet and the use of computer technology to study his work. The actual report and was k.f.m.n. GV Zhuravska and student FMF TP Demydyuk the possibility of using Processing programming language for visualizing geometric objects studied in the course of higher mathematics, and many others.

Finally, on their own scientific advances reported first-year students of the Faculty of VM inzhenernohimichnoho Veremiyenko, A.V.Kazakova, OA Leshchenko and SA Shemet.

Following the conference, issued a collection of works of its members. Accessed FMF article dean prof. VV Vanina, prof. V.P.Yurchuka and Assoc. N.P.Ismailovoyi dedicated to the famous scientist prof. Odessa Polytechnic Institute Anatoly Nikolaevich Podkorytov on the occasion of its 85th anniversary. Professor Podkorytov is the founder of Ukrainian scientific school of the theory of conjugate surface. More than 20 years was a member of the presidium of the scientific and methodical commission USSR Ministry for 5 years - a member of a specialized expert council at HAC of Ukraine. He is active in public and administrative and academic areas, is a member of the editorial board of the book "Applied geometry and engineering graphics", several academic councils on candidate and doctoral theses. A.M.Podkorytova elected chairman of the Odessa region newly created Ukrainian Association of Applied Geometry. According to the order of the Ministry of Education of Ukraine Professor AM Podkorytov appointed as chairman of the All-Ukrainian competition of student works from the "Applied geometry." Anatoly Nikolaevich creative collaboration with the Kiev Polytechnic began in 1995. Because she received several patents for a new method of designing working surfaces tillage tools by using the theory of conjugate surface.

I wish the organizers of the scientific conference, lecturer and students who only come to the path of research, new scientific achievements!